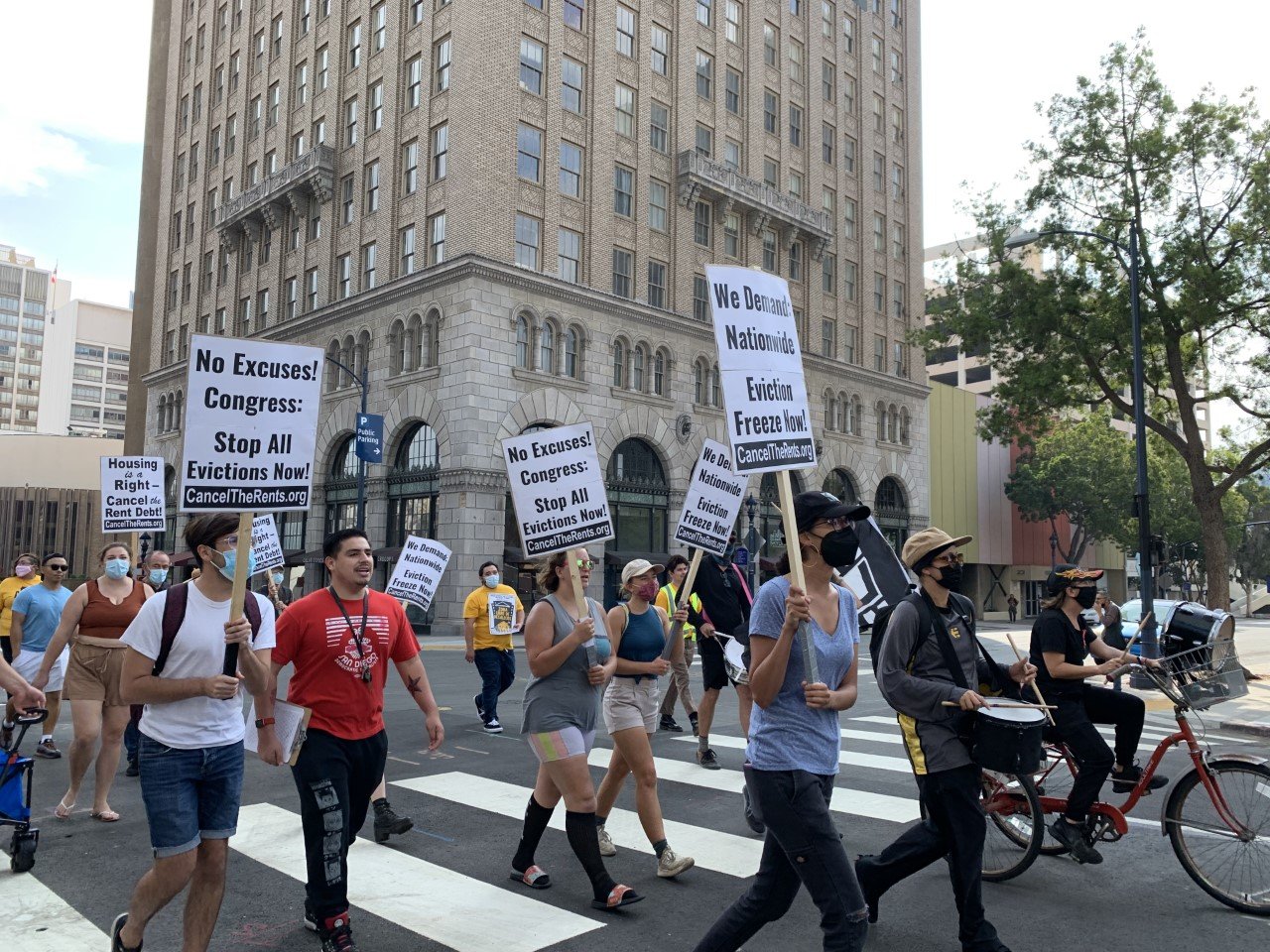 As part of national days of protest called by Cancel the Rents, more than 60 demonstrations took place in cities and towns across the United States September 24-26 calling on Congress to immediately pass an indefinite nationwide moratorium on evictions. Protesters also demanded the cancellation of the crushing debt to landlords that had built up over the course of the pandemic as tenants’ were unable to work and back rent accumulated. Tens of billions of dollars have already been allocated for renter relief programs by the federal government, but is being distributed excruciatingly slowly — another focus of the protests.

Congress has the authority to prevent 11 million evictions from taking place in the midst of a pandemic. This could be accomplished by incorporating an eviction freeze into the social spending budget that is currently under consideration. Because it is being voted on under a process known as “budget reconciliation”, such a maneuver would allow a nationwide eviction moratorium to avoid having to meet the undemocratic 60-vote “filibuster” threshold in the Senate. Participants in the Cancel the Rents actions refused to accept excuses from politicians and demanded that Congress act with the urgency this dire crisis calls for.

Residents of East Point, Georgia rallied in front of East Point City Hall to participate in the national days of protest called by Cancel the Rents. The residents were joined by the Atlanta Homeless Union, Party for Socialism and Liberation, Workers’ World Party, and East Point City Council member Nanette Saucier. “We demand that accumulated debt be forgiven,” said East Point resident Keightley Wilkins. “How could we possibly expect those who have been unable to pay their rent and mortgages not only to start paying again, but also be able to pay off the debt they have accumulated? The Democrats control both houses of Congress and the executive branch. They have no excuses.”

Cancel the Rents in and around Los Angeles, California held actions in six neighborhoods with speakouts and banner drops to spread the message to surrounding communities. Protesters were met with a positive reception and received approving honks, raised fists and cheers from hundreds of cars passing by. In the Westside event, organizers met Marissa, a single mother of four who had recently been evicted who joined in the chants. She told Liberation News, “It’s just so hard… I’m thankful we’re all still together… But I’m not going to a shelter, there’s COVID and I have four kids. We’re supposed to be inside. We need our own place.”

In Baldwin Park, Cancel the Rents activists were joined by local community members and tenants rights advocates, as well as members from local organizations People United of Baldwin Park and Change West Covina (CWC). Both organizations are leading efforts to make the people’s demands clear to local government officials as well as provide mutual aid services to members of the community. On the importance of attending actions like these, CWC member Brittany summarized: “If tenants rights unions keep organizing with the community and informing people of their rights as tenants, landlords won’t have as much power and won’t be able to fear-monger and take advantage of workers.”

Seattle, Washington activists did a banner drop and speak out near Mt. Baker Light Rail. Arriana Laureano, a formerly homeless community member, gave an account of her experience with the ludicrously complex Emergency Rental Assistance Program which took a year — and entry in a lottery! — for her to get any money to pay her back rent. Just days before the national days of action, Washington Gov. Jay Inslee declared an extension to the “housing stability bridge period” for one more month, and Seattle Mayor Jenny Durkan extended the city’s eviction moratorium to the end of 2021, at which time the city’s prohibition on winter evictions will take effect for a few additional months. Organizers with Cancel the Rent Housing Coalition declared these developments partial victories for the movement and vowed to continue the struggle to make housing a human right for all.

Several actions took place across New York City. In Brooklyn, socialist candidate for mayor Cathy Rojas joined with activists from the Party for Socialism and Liberation and Brooklyn Eviction Defense for a rally. Rojas declared at the rally, “We’re here to tell you that it is possible to house every single person in New York City. We can make New York City a rent controlled city… We could cancel rents and mortgages until the end of the pandemic.” Demonstrations also took place in Harlem and Queens.

Two actions were held in Chicago, Illinois. On Sept. 25 a block party alongside People United Albany Park – Pueblo Unido Albany Park and other partners provided free food, groceries, housing resources, and COVID vaccinations & testing to neighbors while raising the demands of the days of protest. The next day, Cancel the Rents was in Little Village for a speakout.

A car caravan traveled through San Francisco’s Mission District and ended with a rally at Garfield Square, drawing support for a nationwide halt to evictions and cancellation of rent debt. The rally heard speakers representing the Do No Harm Coalition, United Educators of San Francisco, SMART Local 1741 and the San Francisco Eviction Response Network. At the rally, Nathalie Hrizi, Vice President of Substitutes for the United Educators of San Francisco, said that “The idea that a country and a city so wealthy would start putting people out on the street in the midst of a public health crisis is absolutely unacceptable. Congress does need to immediately extend the eviction moratorium, because we know that it’s already saved lives to stop evictions. But we also know that the City of San Francisco can step up because they have gotten billions of dollars and they can put it into the hands of working people immediately. They can step up and do what’s right for public education, what’s right for healthcare in this city and what’s right for working people.” The actions were covered on local media.

Organizers and supporters of the Cancel the Rents campaign held a street meeting in the Fruitvale neighborhood of Oakland, California, passing out literature and engaging with people about the need to fight to win a new eviction moratorium and cancel the rent debt. Encouraging people to join an eviction response network, Rosa Astra from the Cancel the Rents campaign explained, “Republicans and Democrats alike refuse to take the action that’s needed to address this housing crisis. That’s why we need to get organized and fight back and force them to take action. We need to force them to put people into housing! We need to force them to ban evictions!”

Dozens of Albuquerque, New Mexico residents held a community speakout followed by an overnight protest encampment outside of the Metropolitan Court, where evictions are processed. Demands for action were statewide as well as national. Protestors called on Governor Lujan Grisham to convene an immediate special session of the New Mexico legislature to pass an indefinite moratorium on evictions. Without federal or statewide legislative action, over 100,000 households (out of a population of 2 million) face imminent eviction once the state Supreme Court lifts its moratorium.

To make matters worse, so far New Mexico has only distributed 19 percent of the federal dollars allocated to the state to help renters. For this reason, at the protest encampment a street-side workshop was organized to show community members how to apply for emergency rental assistance. The discussion included planning how to canvas the city to help our neighbors with this resource. The protest encampment also included the assembly of 100 hygiene kits and food packs that were distributed the following morning by teams of protest campers around the city.

Cancel the Rents in Denver, Colorado along with the Party for Socialism and Liberation, Denver Democratic Socialists of America, and 9to5 Colorado held a rally and car protest demanding immediate action from the federal and state government to stop evictions.

Satya, a mortgage holder at a rally on the national day of action on Sept 25, to demand canceling of the rent debts and stop evictions, at Olneyville, Providence: "In case U didn't know, if U pay a mortgage, U are also a bank renter. It's an illusion that U are a homeowner." 1/3 pic.twitter.com/nQ0Xxnf9Gi

In front of the White House, Washington, D.C. organizers with Cancel the Rents carried out a speakout that included lifelong D.C. residents, local tenant organizers, and other working people dedicated to housing justice. Many speakers pointed out how in Washington the question of “responsible” spending arises when social services are up for debate, but never for wasteful military spending. The crowd marched from the White House to the Office of the Mayor, demanding federal rental assistance be disbursed at a dramatically expedited pace. When they arrived, they united with another march rallying for a guaranteed basic income and were able to highlight both economic justice struggles.

Cancel the Rents in San Diego, California was joined by DSA San Diego, ANSWER Coalition, Peace and Freedom Party, ACCE (Alliance of Californians for Community Empowerment), and Spring Valley Clean Up Crew for a rally outside City Hall and march through downtown. Nicole from ACCE told the crowd, “No one should have to live in a frantic state of mind — is my family going to be safe? Are we going to have a roof over our head?”

A rally was held outside Democratic Representative Jim Costa’s Fresno, California office to demand an act of Congress that would stop all evictions and cancel the rent debt. Several speakers who work on housing issues addressed the crowd, including Fresno State sociology professor Dr. Amber Crowell, Faith Inter-Religious Ministries (FIRM), the Party for Socialism and Liberation, Alexandra from Faith in the Valley, Pedro Navarro Cruz from Communities for a New California (CNC) Education Funds, and United Students Against Sweatshops (USAS).

Housing rights activists gathered in Albany, New York at Malcom X Park to canvas for the Cancel the Rents campaign. Organizers spoke with community members about the demand for the cancellation of all back rent accrued during the pandemic as well as about the ERAP (rental assistance) program. One tenant explained that they had submitted the tenant section of the ERAP application and was stuck waiting for their landlord to submit their section of the application which is required in order to receive rental assistance.  The event then moved to the New York State Capital to press these demands.

Philadelphia, Pennsylvania’s demonstration took place at City Hall where activists from the Philly Liberation Center, Philly Tenants Union, Party for Socialism and Liberation and Society’s Roses rallied. The action received strong support from people walking through the busy downtown area. Many visited an information table where Liberation Center volunteers were helping people apply for renter assistance and learn about how they can organize with their neighbors to directly block evictions that landlords attempt to illegally carry out.

In Boston, Massachusetts, protesters held a rally and speak out in the bustling transit hub Nubian Station in the Roxbury neighborhood. Flo Ugoagwu, an organizer with Cancel the Rents, noted that “Single mothers are threatened, harassed, and evicted at the highest rates … Mothers deserve better than this. Working-class people deserve better than this!”