A new map from Community Networks shows that more communities than ever are building their own broadband networks to end big telecom’s monopoly.

Communities invest in telecommunications networks for a variety of reasons – economic development, improving access to education and health care, price stabilization, etc. They range from massive networks offering a gig to hundreds of thousands in Tennessee to small towns connecting a few local businesses.

This map tracks a variety of ways in which local governments have invested in wired telecommunications networks as well as state laws that discourage such approaches. 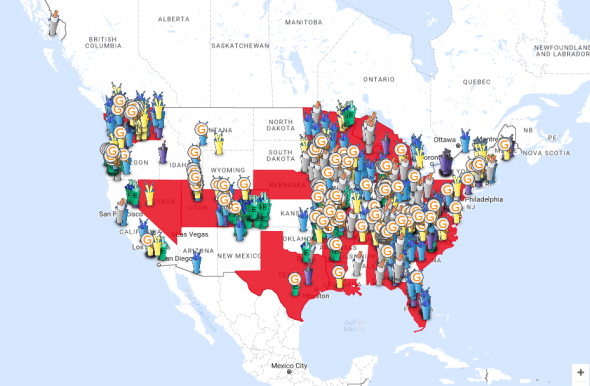 Nineteen states have barriers in place that discourage or prevent local communities from deciding locally if such an investment is a wise decision. We strongly believe these decisions should be made locally, based on needs, capacity, and desire of the community itself.

Click on the pin of a network to learn more about it or click on a state with barriers (in red) to learn about the limitation. Below the map, you may select what types of information you want to display. We have written about every municipal FTTH network here. Information on rural cooperatives here.

If you want more information about a specific network, check if we have tagged it in a previous post, search our site for it using the upper right corner of the page, or check another source of information such as the database maintained by Broadband Communities Magazine.

We continue to expand this map with other forms of publicly owned networks. Still to come are wireless networks, networks serving community anchor institutions, and more. Get updates by signing up for our one-email-per-week list announcing new stories and resources.

Please do let us know if we missed any community networks or if you want to report an error. Stay up to date with information about these networks by following Christopher on Twitter and MuniNetworks on Twitter, fanning us on Facebook, and/or tuning into our weekly podcast.