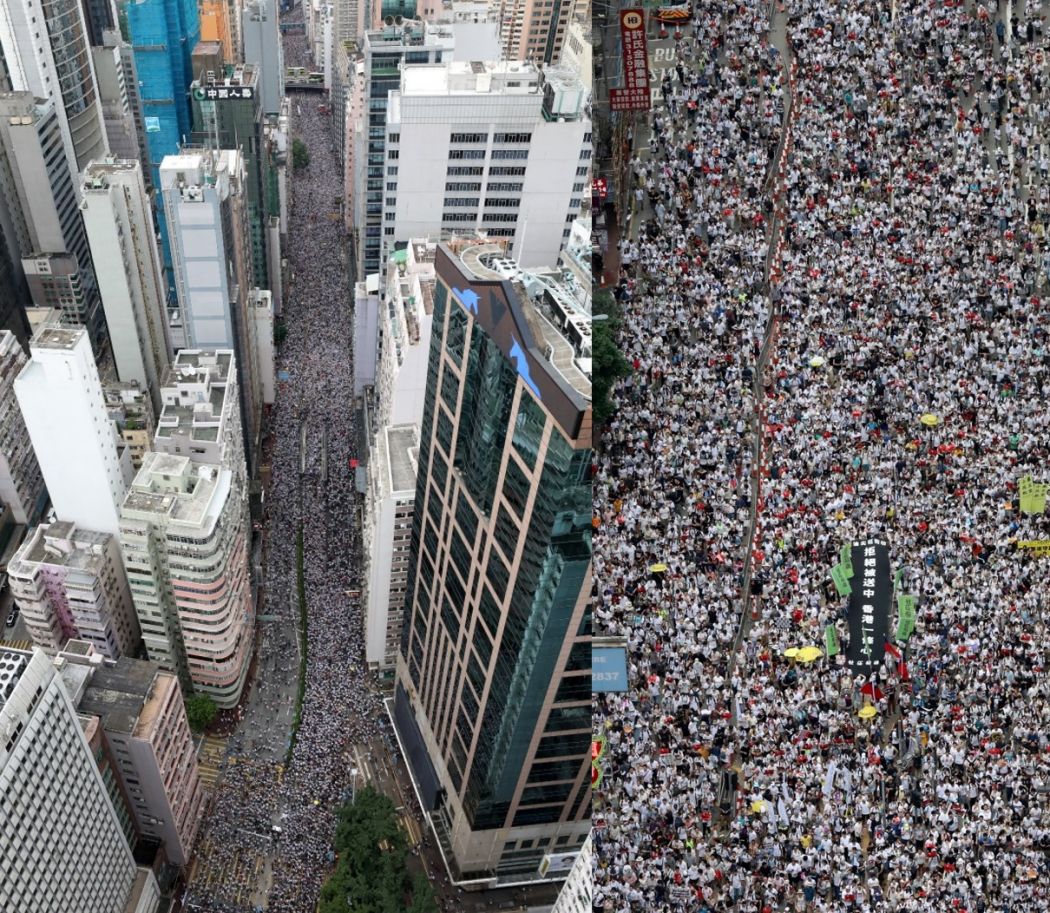 Note: Whenever considering on mass protests in Hong Kong or other news involving China, it is important to remember that the US national security strategy is now based on conflict with major powers, specifically China and Russia. With protests like the one reported below it is difficult to know what role, if any, US funding of various organizations plays. Often the US is able to impact protests like these, even when the protests raise legitimate concerns of people in Hong Kong. The US has been tied to previous protests in Hong Kong by commentators and the Chinese government.

The National Endowment for Democracy (NED) provided funding to organizations in 2018 totaling $445,000 including funding organizations “To facilitate engagement on Hong Kong’s growing threats to guaranteed rights.” The US has committed large funding to build opposition to China for many years. For example, NED projects for Hong Kong totaled $695,031 in 2013. NED is aware of concerns that they are behind “democracy” protest in Hong Kong and makes an effort to deny their involvement. The US gives awards to “democracy activists” in Hong Kong as this video of Martin Lee where NED highlights from a 1997 winner of NED’s Democracy Award. discussing 20 years after the handover of Hong Kong to China.

This month on June 4, 2019, NED gave its Democracy Award on the 30th anniversary of the Tiananmen Square event. Not only did NED highlight that event, which many point to as inspired by the United States as an attempt to make China into a capitalist country, but also to highlight the controversial claims about the Tibetan and Uyghur peoples alleged incarceration. In announcing the award, the president of NED, Carl Gershman, said: “Since 1991, the NED has given as its Democracy Award a replica of The Goddess of Democracy, the 33 ft statue that was unveiled in Tiananmen Square…”

Wister Au hit the streets on Sunday – along with up to a million others – just as he had during the 2003 protest against national security legislation and the 2014 Occupy movement for democracy.

This time, he was also marching for his 14-month-old son Marcus.

In all, 1.03 million people took part in Sunday’s march, according to the organizer Civil Human Rights Front, double the turnout of the 2003 protest. Police put the figure at 240,000.

They came, young and old and from all walks of lives, to say no to the government’s proposed law amendments, which would allow the transfer of fugitives to jurisdictions with which Hong Kong has no extradition deal, including mainland China. 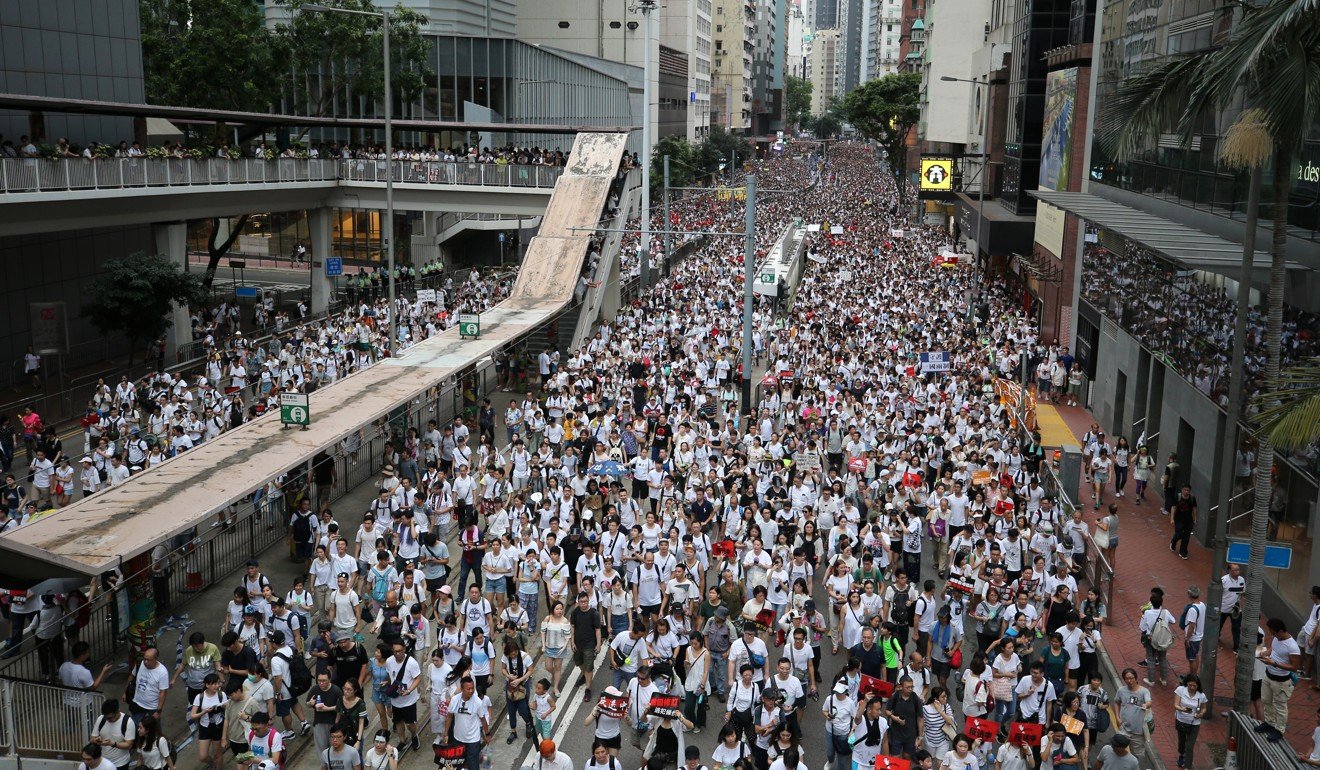 The city’s streets were awash with white, as protesters heeded the organizers’ calls to wear the color symbolizing light.

“I just had to come here today. Who knows if we will be extradited to the mainland in the future if the bill is passed? For my child, it’s an education for him today,” said Au, an IT professional, who brought Marcus along in his stroller.

“I was here during the 2003 protest. I was just a secondary school student at the time. I feel like the turnout this time was as big as back then.”

Live: More than 1 million march as one against extradition bill, organizers say

For many, Sunday’s march brought back memories of the 500,000-strong protest in 2003, which led to the government shelving plans to enact legislation critics feared would erode the city’s freedoms.

This time around, the turnout was so large the final marchers left the Victoria Park starting point in Causeway Bay about four hours after the first group. 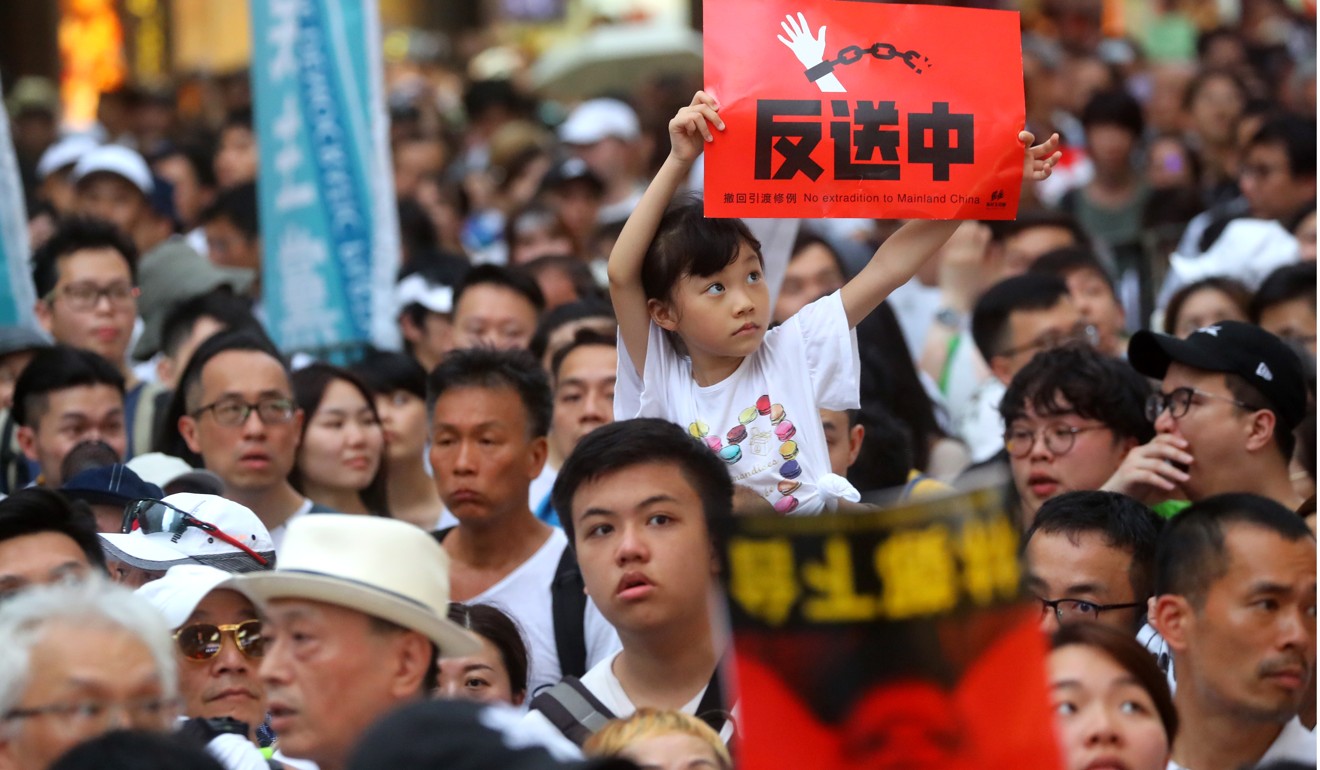 The march was made up of people from all walks of life. Photo: Edmond So
Share:

The metro system was so inundated that, at around 2.30pm when the protest started, at least one train did not stop at Tin Hau station, near the park, “out of safety concerns” because of platform overcrowding.

It took at least 30 minutes to cross the short underpass from Hong Kong station to Central station because of the numbers heading to Causeway Bay. Many from Kowloon crossed the harbor by ferry since the trains were too packed. Some said it took an hour to get on the Star Ferry at Tsim Sha Tsui for the seven-minute trip across the harbor.

I think this is the most crowded protest I have ever been to. We are here to do what we canFinancial analyst Catherine Leung

A section of Hennessy Road was originally closed off to protesters to allow vehicles to pass. But police opened it after marchers complained and some dashed through the cordon.

Catherine Leung, a financial analyst, was still stuck in the park at 5 pm. But she did not mind.

“I think this is the most crowded protest I have ever been to,” she said. “We are here to do what we can.” 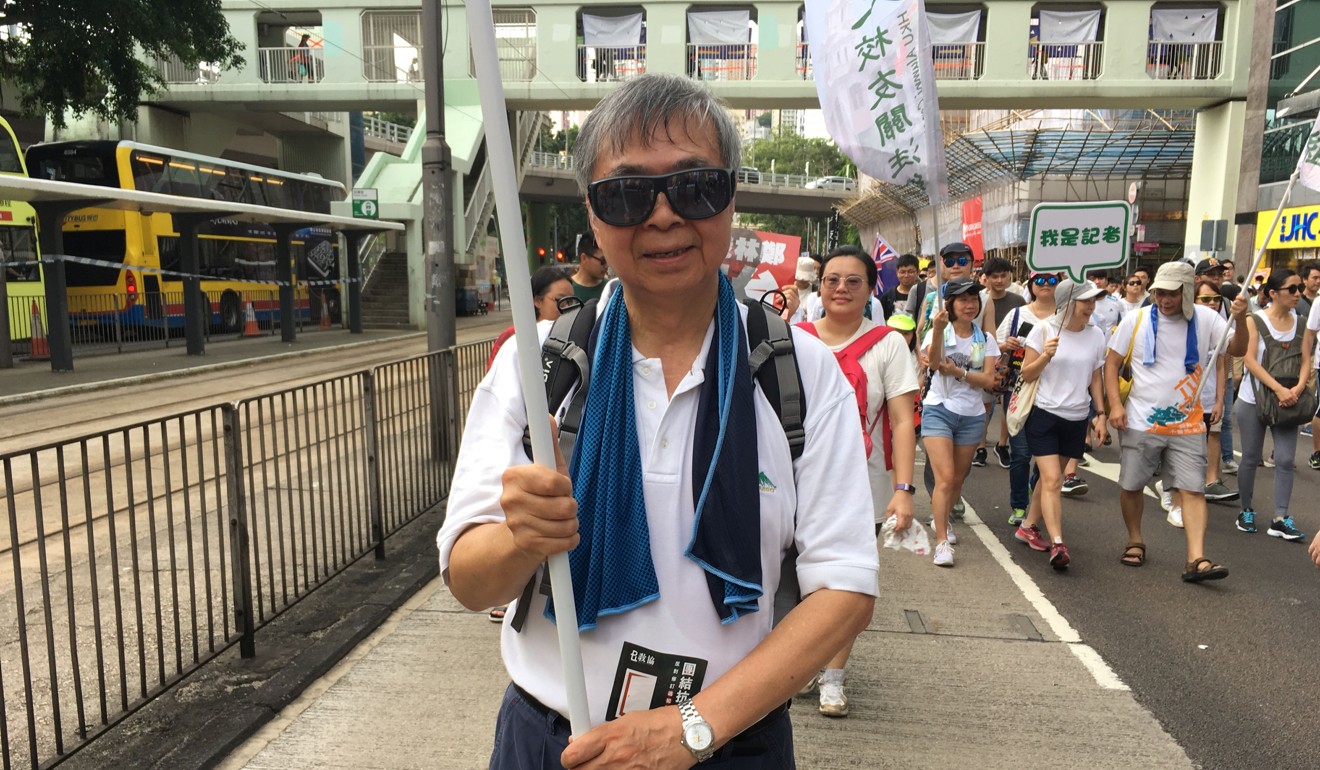 Retired primary school teacher Pun Tin-chi slammed officials who he said lied about the extradition bill needing to be passed so Hong Kong would not become a haven for criminals.

“I don’t even know what I can say to these officials. All I can say is, I am already 70 years old and I cannot believe I am witnessing how they have been telling lie after lie,” he said.

“So many people have come out … I don’t know if the government will really withdraw the bill, but we Hongkongers just cannot give up the fight.”

Among the first-timers were 10-year-old Tristan Yap and his mother Chan Yin-wah, 56.

“We must not let this bill pass,” Chan said, accusing Chief Executive Carrie Lam Cheng Yuet-ngor of not listening to Hongkongers. “It’s about Hong Kong people’s lives and future.”

I wouldn’t care if this was just about myself. But I hope to contribute and defend this city Businessman Ben Liang

Chan said she once considered leaving Hong Kong because she believed the central government was taking steps to erode the city’s freedoms. But she gave up on the idea because her daughter loved Hong Kong so much she would not leave.

Businessman Ben Liang, from Shanghai, was there with his two daughters, aged five and 23, to defend the values he said differentiated Hong Kong from the mainland.

“I wouldn’t care if this was just about myself. But I hope to contribute and defend this city,” he said.

“I used to believe Hongkongers could defend their rights, but now I feel the city has become somewhat similar to Shanghai and Beijing, or even worse. Like our legal system … it’s a joke! But I still want to defend this place, no matter what, until the very end.” 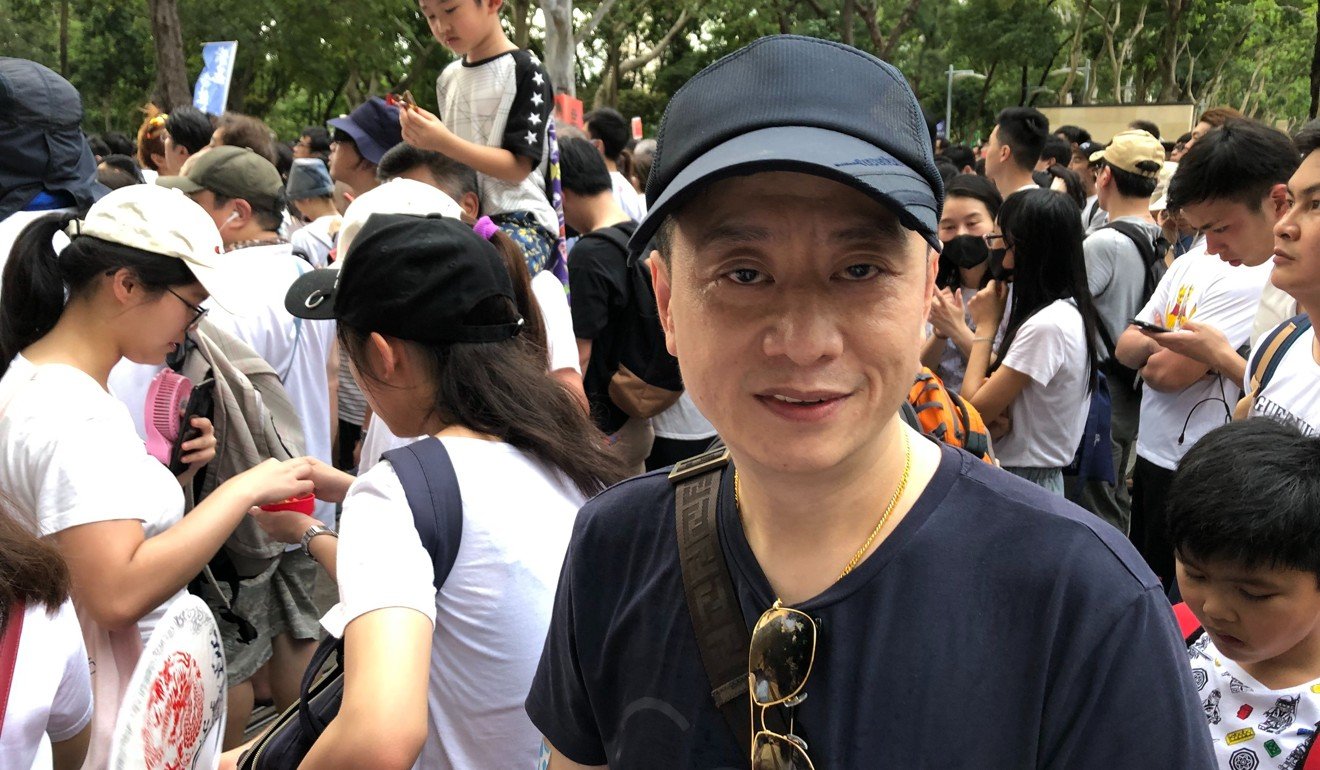 Businessman Ben Liang said he was fighting for the values that differentiated Hong Kong from the rest of the China. Photo: Alvin Lum

About 90 shops closed their doors for a day so their employees could join the protest. One shop said on its Facebook page that this was the right thing to do, even if there was only a 1 percent chance the government would shelve the bill.

Michelle Lam, 22, joined a protest for the first time since Occupy, the 79-day pro-democracy campaign that brought parts of the city to a standstill.

“I had felt we couldn’t do anything to change our government,” Lam said. “But this time I decided to come out because this bill is trying to strip us of the rights we have been entitled to.”

From Berlin to Brisbane, a wave of solidarity for extradition protest

Film director Shu Kei, who also produced documentaries on the Occupy movement, said the government had no excuse to ignore protesters.

“Or else, on June 12, there will be another huge crowd turning up to put pressure on them,” he added, referring to the date the Legislative Council votes on the bill.

He said he spent hours on a Wan Chai footbridge and felt touched watching the crowds pass. “I have always believed in Hongkongers, because they will always show up when it matters most, and will not be defeated [by the result of Occupy].”