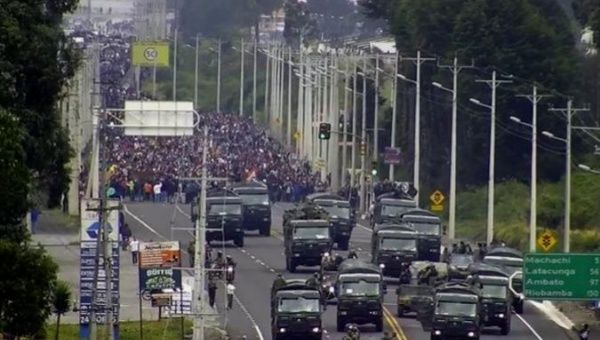 Above Photo: According to the National Indigenous of Ecuador (CONAIE) around 20,000 people from various Indigenous communities are part of the march. | Photo: Ecu911

Ecuadorean President Lenin Moreno informed the seat of government has been moved to Guayaquil.

With the Military Brass standing behind him and both, his vice president and minister of defense to each side, the head of state then reiterated that he won’t back down from the decision to eliminate fuel subsidies as he dubbed it “historic.”

The National Assembly has not issued any statement so far.

Thousands of Indigenous peoples stemming from both the north and south of Ecuador have reached the capital city Monday night, as reports from across the country show that security forces are violently enforcing the decreed state of exception.

A few hours earlier, military personel placed inside the presidential palace evacuated all press members that were waiting for 16h00 local time press conference from President Lenin Moreno, who is in Guayaquil at the moment.

According to the National Indigenous of Ecuador (CONAIE) around 20,000 people from various Indigenous communities are part of the march which demands President Lenin Moreno to reverse the neoliberal economic austerity package announced last Wednesday.

#Ecuador | The indigenous march arrives to the capital and it’s only two blocks away from the Carondelet presidential palace, where no authority is present at the moment. Follow us for more on this ongoing national strike #ParoNacional https://t.co/RaYwxTk0td

“We have completely closed the dialogue with the government, there is no dialogue until we reach the capital … We are not here to negotiate behind the people’s backs. The people have risen and that is what we are going to respect,” Conaie’s President Jaime Vargas said.

Meanwhile, the Constitutional Court issued a ruling endorsing the state of exception in Ecuador. Social media users have denounced extreme violence coming from military and police forces across the country.

In the southern outskirts of Quito in Santa Rosa, one of the military tanks the government deployed to face the Indigenous march was neutralized by the demonstrators, protesting Moreno’s neoliberal economic measures. The armed vehicle was pushed down a ramp and set on fire.

#Ecuador | In the southern outskirts of Quito in Santa Rosa, one of the military tanks the government deployed to face the Indigenous march was neutralized by the demonstrators, protesting Moreno’s neoliberal economic measures. pic.twitter.com/XiAlQZbwwm

The national strikes have been called by various unions on Oct. 3 after Moreno announced “Paquetazo”, a package of austerity policies to comply with suggestions presented by the International Monetary Fund in exchange for billions of dollars of loans.

Due to the mobilizations and road closures, classes were suspended throughout the country. The General Secretariat of Communication issues a statement saying school classes had to resume Monday but then issued a later statement declaring the closure of schools in the highlands areas.