Above Photo: Derek Cote, a homeless man, panhandling in the median strip on a street in Portland, Maine.

Thousands of U.S. cities restrict panhandling in some way. These ordinances limit face-to-face soliciting, including interactions that occur on sidewalks and alongside roads, whether they are verbal or involve holding a sign.

According to a growing string of court decisions, however, laws that outlaw panhandling are themselves illegal. In light of rulings that found these restrictions to violate the freedom of speech, Cleveland, Dallas, Denver and dozens of other cities have repealed laws restricting panhandling in public places since 2015.

As a professor of law and urban studies, I study how local ordinances can harm the poor, particularly people experiencing homelessness. I volunteer with the American Civil Liberties Union and other nonprofits to help fight for more equitable local policies. And I have brought together nonprofits and individuals to successfully change unconstitutional anti-panhandling laws across Ohio, my home state.

Over the past 30 years, cities have increasingly adopted laws to reduce or eliminate panhandling. Although a few jurisdictions simply ban panhandling outright, most ban the practice in certain areas, such as parks, near roads or near bus stops. Cities also regulate what they call “aggressive solicitation” – a term defined broadly to include behavior like asking for a donation twice, in pairs, or after sunset – on the basis that it can make passersby feel physically threatened or vulnerable to mugging.

The First Amendment protects everything from distributing pornography to waving hateful signs outside military funerals. So it is should not be surprising that it also protects fundraising pitches of all kinds.

In a trilogy of opinions issued in the 1980s, the Supreme Court struck down several state laws that restricted charitable solicitation, including laws that prohibited requests from nonprofits that, according to regulators, spent too much money on fundraising.

Second, local and state authorities can’t dictate which causes may or may not solicit donations within their borders. A regulator’s paternalistic belief that a cause is unwise or inefficient is not a valid reason to limit speech seeking support for it. The listeners can make that decision for themselves.

Panhandling is a basic form of charitable solicitation with a long history. Almsgiving dates back to the days of ancient Greece and the Bible.

Instead of asking for help on behalf of an animal shelter, food pantry or any other kind of nonprofit, the panhandlers ask for help satisfying their own personal need. In case after case, the courts have clearly ruled that the Constitution safeguards the right to make personal pitches the same way that it protects the ability of organizations to make their own asks. 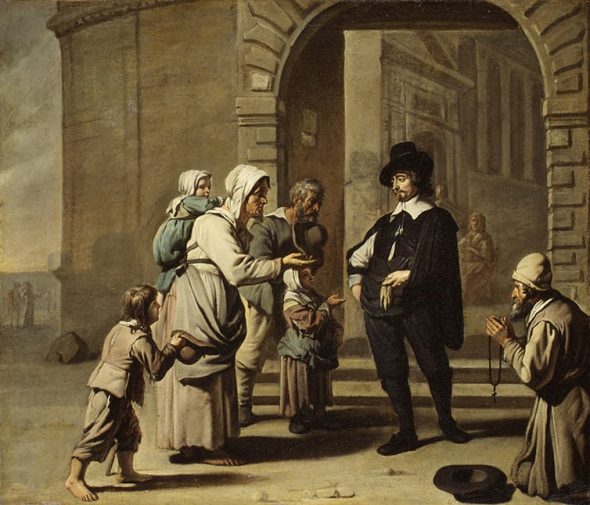 ‘Beggars at a Doorway,’ a Flemish painting possibly made by Abraham Willemsens in the 1650s. Metropolitan Museum of Art

The First Amendment guarantees free speech in public spaces like sidewalks, streets and parks. This freedom is extremely broad but is not without limits.

Governments primarily try to justify their restrictions on panhandling by saying they benefit most passersby, who consider expressions of poverty and desperation a nuisance, and nearby businesses, which fear losing customers.

But there’s no freedom from speech, as the Supreme Court unanimously ruled in McCullen v. Coakley, a 2014 case about the rights of protesters to congregate near abortion clinics. The fact that someone within earshot cannot “turn the page, change the channel, or leave the Web site” to avoid hearing a message they don’t like is “a virtue, not a vice,” wrote Chief Justice John Roberts. 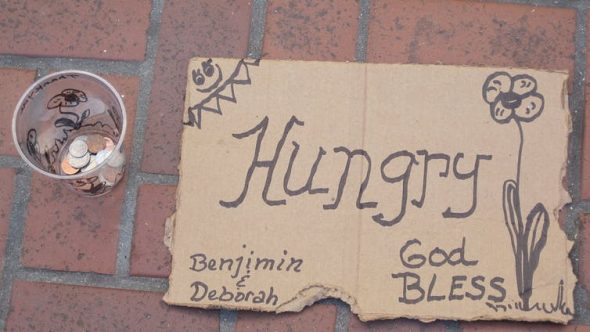 Down and out but not silent

No panhandling bans have made it to the Supreme Court. But in recent years, all lower courts ruling on this issue have found that laws imposing restrictions on sidewalk and roadside solicitation are unconstitutional.

While cities have some legitimate public safety concerns, focusing on a category of speech misses the point. It is at once too broad and too narrow, covering innocent behavior that isn’t threatening and missing much behavior that is problematic.

Instead, cities remain free to regulate problematic behaviors directly, such as prosecuting suspected cases of assault and trespassing or making blocking the sidewalk illegal.

Even better, they can try harder to meet the needs of people who are seeking help rather than attempting to silence them. Portland, Maine, for example, is now hiring panhandlers to clean up public spaces after the courts threw out its restrictive ordinance.

Despite the spate of legal precedents, plenty of these laws remain on the books. Advocates like the American Civil Liberties Union are challenging anti-panhandling laws in Albuquerque, Houston and other places that still enforce this kind of law.

With these measures on their way out, cities now have a good chance to refocus their energies on helping, rather than arresting, their homeless residents.