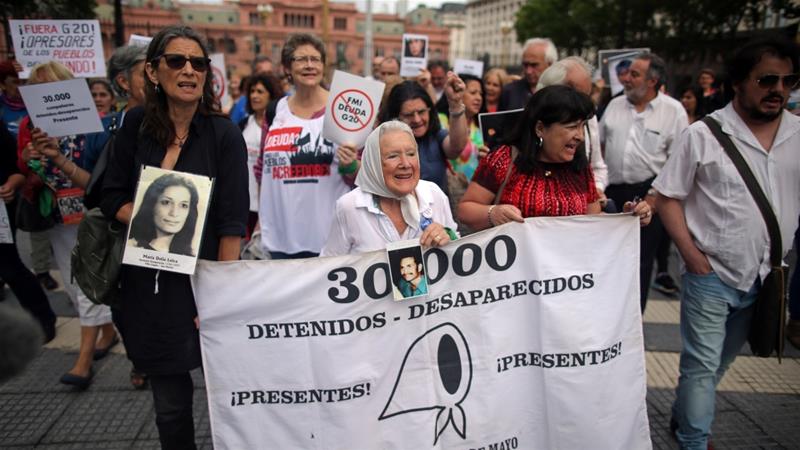 Above Photo: Protesters had to arrive three hours before the march due to security measures put in place for the G20 summit [Agustin Marcarian/Reuters]

Buenos Aires, Argentina – Every Thursday since 1977, a group of women march around the Plaza de Mayo, the square in the Argentine capital Buenos Aires, where the presidential palace is located.

Their demand? The return of their disappeared children.

Tens of thousands of people were forcibly disappeared during Argentina‘s last dictatorship (1976-1983). Many have been confirmed dead, the whereabouts of others remain unknown.

On Thursday, the group marched again, for the 2,120th time, reiterating their demand as world leaders arrived in the city for the G20 summit.

“There are places here where children don’t have bread or meat, and the politicians are busy worrying about taking each other’s jobs,” Hebe de Bonafini, president of the Mothers of Plaza de Mayo Association, said of the upcoming summit.

Several hundred people gathered to support the mothers, and against President Mauricio Macri who turned to the IMF for a loan in June of this year, setting off mass protests in the country.

Many also called for the release of political prisoners and a greater focus on tackling issues like poverty and climate change.

“They’re [world leaders] all genocidal and they come to spend the money of our state,” said Sylvia Flores, who has marched in solidarity with the mothers for the past four years. “They come to chat and they don’t do anything about climate change or hunger.”

As the mothers marched around the square in two groups, the name of each person was disappeared was called.

The crowd responded by saying “presente” to symbolise that each person was present among the group.

De Bonafini criticised the G20 leaders for what she called their greed, extractivist policies, and failure to meet the needs of their people.

Three of de Bonafini’s children were disappeared during the dictatorship, but she doesn’t speak about their stories because one of the mothers’ guiding principles is the socialisation of motherhood. They aim to represent all of those who lost their lives fighting for democracy, rather than specific individuals.

De Bonafini and the other mothers in the association also refuse to receive any kind of compensation from the government. “You can’t put a price on life, especially not the life of a revolutionary,” she said.

There are places here where children don’t have bread or meat, and the politicians are busy worrying about taking each other’s jobs

The mothers had to arrive in the square three hours before the march due to security measures put in place for the G20 summit.

“In 42 years we have never been prohibited from marching,” de Bonafini said prior to the mothers heading to the square. “Once they put fences up and we had to get ladders and climb up one side and down the other. We can’t do that any more because we’re 90 … but they haven’t stopped us before and they won’t stop us now.”

In the early years, the mothers had to march in small groups – often in pairs – to avoid being arrested.

Just a few months after they began their protest in 1977, a man infiltrated the group by pretending his brother had been taken. Three of the most active mothers – Azucena Villaflor de Vicenti, María Ponce and Esther Ballestrino de Careaga – were arrested, tortured and thrown from planes into the sea.

“Nobody wanted to come to the square after that,” de Bonafini said. “We had to go knocking from door to door to get them to come again.”

But the mothers, donning their symbolic white headscarves, and their supporters continued to march and will keep doing so every Thursday.