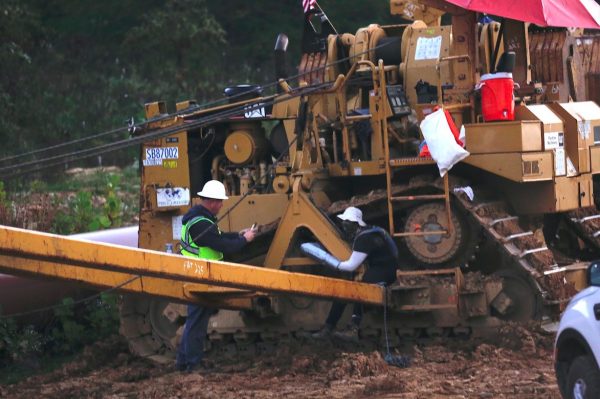 As of 11 AM, one protester had been extracted and arrested after preventing construction at the site for over 5 hours. The other was in the process of being extracted by law enforcement.

Those locked down stated, “A better world isn’t just possible, it’s necessary. As we write this, wildfires rage and major cities are recovering from unprecedented flooding. We’re not running out of time to address global climate change, we’re already out. We’re out of time for ‘transitional fossil fuels.’  We’re out of time for green washing by extraction companies. We’re out of time for a permitting process that calls projects that will increase gas consumption by two billion cubic feet a day ‘carbon neutral.’ We are out of time for the company and the courts’ bullshit. Every day of this fight, the movement against extraction grows. We are here to stay, we won’t back down, and no amount of intimidation from the courts or anyone else will stop us from doing what’s right.”

Construction of the Mountain Valley Pipeline has been ongoing since 2018, but the company is still wading through the regulatory process and seeking permits required for construction. Last night in Rocky Mount, Virginia, the VA Department of Environmental Quality (DEQ) held the first of two September hearings on the project’s certification under Section 401 of the Clean Water Act. The DEQ hearings allow the public to give comments in person to the State Water Control Board, which is also accepting written comments until October 27th.

Opponents to the pipeline point to the over three hundred and fifty water quality violations and hundreds of thousands of dollars in fines that the project has already racked up, and say the DEQ should reject it outright.

Wanda Buchanan, resident of Linside, WV, added, “I feel the pipeline has proved that it is not needed. MVP stated that they were going to have it flowing at least four years ago due to the urgent need. The need has decreased since then. They tore up the beautiful countryside and mountains, and now spend unbelievable hours re-seeding the weeds and trying to stop the erosion. If they can’t handle the easy part, I do not trust their work on the pipes, stream crossings, etc. This needs to stop!”

Roger Crabtree, resident of Lindside, WV, stated, “The process that allowed MVP to take land for private profit is outrageous. Also outrageous were the promises to boost local economies long term. Not happening. Most importantly, the effects of this pipeline on Mother Earth, her water, and the future of her residents are all negative. Stop MVP!”

The second DEQ hearing takes place tonight, in Radford, VA, at 6 pm. The DEQ declined requests for a virtual hearing option, where residents could give oral comments remotely.

The protesters locked to construction equipment today, who identified themselves as Loam and Spit, also stated that they “are in solidarity with Indigenous water protectors fighting to stop Line 3 and share outrage for the heinous charges being placed on them and on No DAPL protestors 8 years later.”

Line 3 is a tar sands pipeline extension, currently under construction in parts of Canada and extending into Minnesota and Wisconsin by Enbridge Inc. The Indigenous-led resistance to the project is facing mass felony charges in Minnesota courts, and pain compliance tactics that have left protestors with Bell’s Palsy, a condition causing partial paralysis of the facial muscles, according to the Giniw Collective’s recent social media posts.

Loam and Spit continued, “we are also in solidarity with the Zapatista communities in Mexico. They are Indigenous and non Indigenous people who have been standing up for autonomy, their basic rights to life and self determination, and against extraction in Chiapas since 1994. In doing so, they have faced far greater repression from the state and corporate interests than we ever will. Just last week, two members of the Good Government Council in Chiapas were kidnapped by members of a paramilitary group aligned with the Mexican state. To this we say hands off the Zapatistas! Hands off Indigenous land! Land back!”

They add, “we are part of a global movement against extraction and exploitation. If you’re reading this or watching us, we want you to feel capable, not hopeless. If we want to get to the world we need, it will be through the work and struggle of many different groups in many places. We would love to see folks inspired to take action against the Mountain Valley Pipeline. We also love to see folks taking a stand for what’s right wherever they are, whatever the context. Find each other, learn from each other, organize. Don’t back down. We’re in this together and our time is now.”