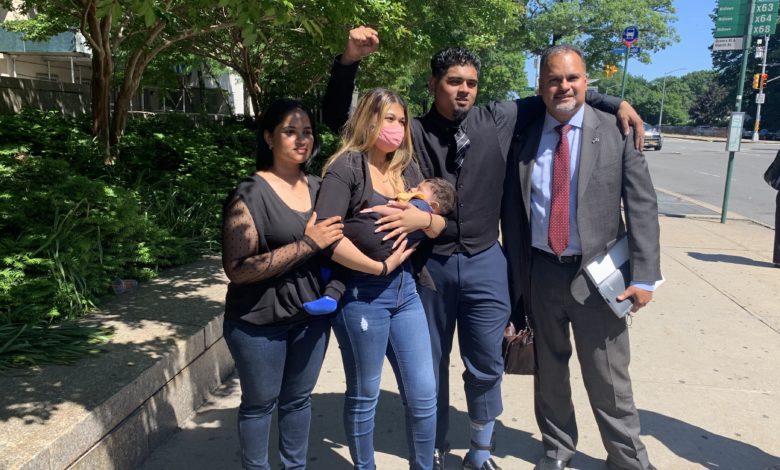 Above Photo: Churaman celebrates his victory with his mother, his partner, and his attorney. Liberation. Amanda Yee.

On June 6 on the steps of Queens Criminal Courthouse, community members celebrated a hard-fought victory after nearly eight years of struggle: the dismissal of all murder charges against 22-year-old Prakash Churaman. Those celebrating with Churaman included his attorney, family members, members of the press as well as community organizations that have worked closely with Churaman over the years he had been fighting the charges, including Desis Rising Up and Moving, the Party for Socialism and Liberation, How Our Lives Link Altogether, Voices of Community Activists and Leaders New York, and the Free Prakash Alliance.

In 2014 a then-15-year-old Churaman was arrested and coerced by New York Police Department into a false confession for the murder of his friend Taquane Clark during a robbery. No physical or forensic evidence linked him to the crime—the only “evidence” was the “earwitness” testimony of Clark’s then-74-year-old grandmother who claimed to have heard Churaman’s voice at the scene of the crime.

Churaman was tried and convicted in 2018 of felony murder, but the charge was later overturned because the judge did not allow an expert on false confessions to testify, and he was put back into pre-trial detention. During this time behind bars, Churaman rallied a group of supporters on the outside, and eventually managed to secure his own bail and release from Rikers. He had been on house arrest since January of 2021 and awaiting a retrial date to be set.

Most organizers expected a retrial date to be set at the Monday hearing, Churaman’s 98th court appearance since his arrest at 15. In an unexpected turn of events in the courtroom, Assistant District Attorney Andrea Medina moved to drop five of the six charges against Churaman, on account of a technicality that he himself had discovered while studying law books in incarceration: due to Churaman’s young age at the time of the crime, the case could not be tried in criminal court. Rather than continue to pursue the case in family court, the District Attorney’s office chose to drop the charges entirely. The ADA also moved to drop the sixth charge, for gun possession.

The PSL has worked closely with Churaman over the last year and a half, in the form of coordinating weeks of action, rallies, media outreach, webinars, fundraising events, and community outreach. Its members have emphasized that it was only the mounting public pressure and media attention brought by such sustained organizing alongside other community groups that forced District Attorney Melinda Katz to finally drop Churaman’s charges. In fact, during a January hearing, both the judge and prosecution scolded Churaman for attempting to “influence the jury pool” through using social media and the press to advocate for his innocence. In that hearing, Judge Kenneth Holder ordered that Churaman could no longer speak at the rallies held for him in front of the courthouse ahead of his hearings, and that doing so again would result in him being remanded to Rikers.

And last month, Judge Holder ordered an emergency hearing after a reporter discovered public documents that revealed the two investigators in Churaman’s case had withheld evidence which would have exonerated two men in a separate case. The men had been incarcerated at Rikers for over two years the city had to pay a $2 million settlement. In that hearing, the judge accused Churaman’s attorney Jose Nieves of leaking information to the press, and through a court order, placed even heavier restrictions on how his client could view evidence.

The escalating media coverage brought on by the movement eventually became too much to ignore. The DA knew that pursuing Churaman’s case into trial would have invited further public scrutiny into her office and the actions of the NYPD, potentially erupting into a nation-wide scandal. The defense had filed the motion for the charges to be dropped, offering the prosecution a way out, and they took it.

After the dismissal was announced, a wide-eyed but jubilant Churaman appeared in a state of shock in front of the courthouse.

“I’m still in shock that this happened,” he said. “I was really looking forward to a trial date being set. I wasn’t expecting none of this, so this kind of caught me off guard. So I’m still in shock, still digesting everything that happened in that courtroom.”

When asked the first thing he would do once his ankle monitor was removed, Churaman replied, “I don’t even know! Probably go somewhere with my family. Go somewhere, just to go somewhere—because I can now.”