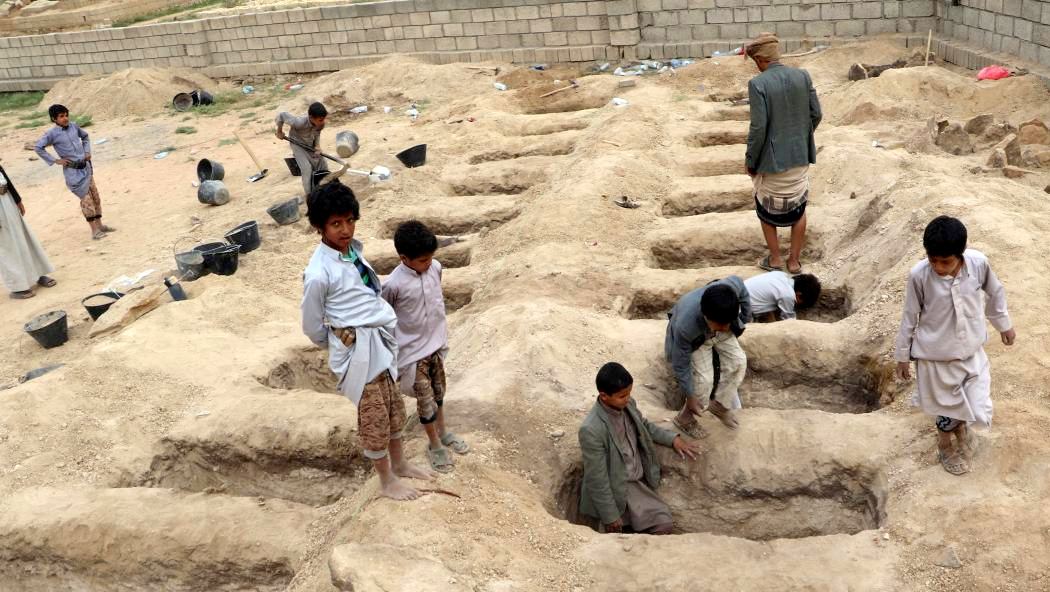 “We, the children of Yemen, who came to here for solidarity with our brothers and sisters, mothers, fathers in Sadaa, say to American people, the Saudis kill us with your weapons. We have fathers, mothers, schools, and games like your children.” — Kareem Ahmed, 13

SADAA, YEMEN — Tens of thousands of Yemenis took to the streets of Sadaa, northern Yemen, to hold a funeral procession for the children who were killed on August 10 by U.S.-backed Saudi airstrikes in Dhahian city next to a crowded market. The deadly attack came while they were on a picnic to Dhahian’s outskirts after graduating from summer school.

The mourners, who came from across the country, walked in a long convoy next to vehicles that carried the bodies of more than 30 children, as participants carried pictures of the attack and chanted slogans against Saudi Arabia and the United States. “America Kills Yemeni Children,” read several banners.

Twenty kilometers north of Sadaa, in Dhahian city, where the attack took place, 50 pick-up trucks ensconced in green drapes, bearing the bodies of children and their teachers, were escorted by their families and thousands of their supporters. Some caskets contained only shreds of victims’ corpses.

On the rooftops surrounding the funeral procession, mothers of the deceased children watched as the convoy of vehicles that carried their loved-ones passed by, tears flowing steadily from their faces, and some mumbling prayers.  Fifty-year-old Deifah Ali al Ma`ss lay beside her child in the funeral procession. She died of shock after hearing that her son was one of the children killed in the airstrike.

The head of the Supreme Revolutionary Committee, Mohamed Ali al-Houthi, a number of ministers, members of Yemen’s House of Representatives, military and security leaders, government officials, and social figures were all present at the funeral procession.

Blame for this and other atrocities laid at the feet of the U.S.

The families of children, mourners, and officials all held the United States responsible for the attack. The head of the Supreme Revolutionary Committee said in his speech during the ceremony that the U.S. and its allies are responsible for the crime of targeting children in Dahian, pointing to the statement by the U.S. State Department, which said that the Saudis have the right to liquidate all opponents. Al-Houthi stated:

Zaid al Tayeb — who lost two of his sons, Ahmed and Ali — said to MintPress:

He was holding a piece of a Raytheon Mark-82 general-purpose free-fall bomb, the U.S. made bomb used by the Saudi-coalition in its deadly airstrike on the school bus. Parts of the bomb were recovered at the scene two days later.

This is not the first time that pieces of a Mark-82 have been found at the location of a Saudi-led airstrike against civilian targets in Yemen. U.S.-Saudi warplanes used Mark-82 bombs in a 2016 attack on a funeral in the capital Sana’a. That attack claimed over 140 lives and injured 525 others.

Meanwhile, scores of Yemeni children rallied in the capital Sana’a on Monday to ask the world to stop the killing of Yemeni children, and protect them from the U.S.-backed Saudi-led coalition. Holding signs and banners, the demonstrating youngsters chanted slogans against the Saudis and U.S. government that has provided them with billions of dollars in deadly weapons.

We, the children of Yemen, who came to here for solidarity with our brothers and sisters, mothers, fathers in Sadaa, say to American people, the Saudis kill us with your weapons. We have fathers, mothers, schools, and games like your children.”

The U.S.-backed Saudi-led coalition has insisted that the attack was a “legitimate military action,” as they accused the Houthis of recruiting children and using them in the battlefields. Officials in Sana’a, however, have insisted that an immediate and independent investigation be conducted into Saudi attack on the school bus in Dhahian, saying “we stand in readiness to facilitate the Commission of Inquiry.”

The International Committee of the Red Cross (ICRC) said in a statement that the school bus was indeed carrying children. Johannes Bruwer, head of the delegation for the ICRC in Yemen, said in a tweet that most of the victims were under the age of 10.

A video posted on social media showed students from on the bus after visiting the shrines of their families who were killed in previous airstrikes. Later, their photos were published along with photos of the destroyed bus.

Over 600,000 civilians have been killed or injured in Yemen since the Saudi-led coalition began its attacks in 2015, according to Yemen’s Ministry of Human Rights, based in Sana’a. The U.S.-backed, Saudi-led coalition’s blockade on Yemen has also triggered an epidemic of disease and famine across the country.