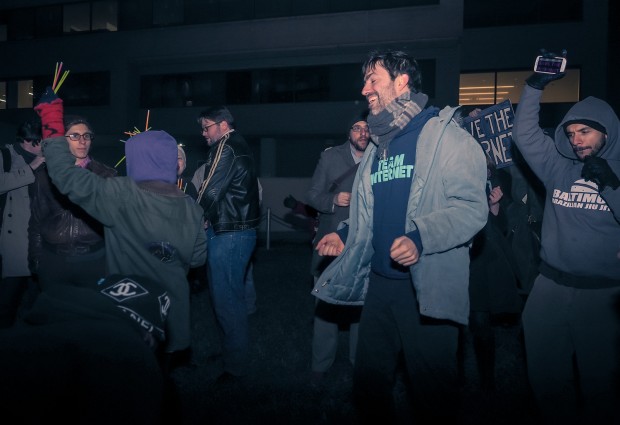 #PartyAtTheFCC Celebrates Success Of The Movement So Far, More Work Ahead

The story of how the net neutrality movement made the politically impossible — reclassification of the Internet as a common carrier — now nearly inevitable is an excellent example of how citizen action can change political reality.

Last night we held a #PartyAtTheFCC to celebrate the successes so far in moving the issue.  The movement invited the commissioners to the party — or, more accurately — attempted to invite them.

Despite cold rain a good-sized crowd joined us at the FCC for a hot dance party.  The party got particularly hot when a conga line took the party to the driveway of the FCC chanting “Party at the FCC” then when Homeland Security showed up the party began to chant: “Home-Land-Security, Come Join The Party.”  The party continued under the watchful eye of FCC security and Homeland Security.

The DC party was one of more than a dozen parties around the country including Los Angeles, Chicago, Seattle, New York, San Francisco, and Boston.

The article below by the Wall Street Journal does a good job describing the current state of affairs. My differences with the reporter regard litigation and Congress. On litigation, no matter what path Wheeler chooses there will be litigation. By reclassifying the Internet under Title II the FCC will be in the strongest possible legal position to defend net neutrality. On Congress, the Republicans would make a terrible mistake taking on the net neutrality community. Polls actually show across the political spectrum support, with Republican voters favor net neutrality more than Democrats because a neutral net provides a level playing field where small businesses and entrepreneurs rather than crony capitalist Interent for a few companies (among the most hated companies in the country like Comcast and Verizon). These companies a record of corrupting Congress with campaign donations and intense lobbying. And, the Congress has had the experience of taking on the net neutrality movement. They know the movement is massive and very protective of Internet freedom capable of burning up their phone lines, filling email boxes and disrupting business as usual in Congress.

The net neutrality movement has brought the issue of reclassification a long way, but there is still work ahead to complete the task. The movement seems up to the task.  KZ

Mr. Wheeler recognized and greeted a fourth protester, Kevin Zeese, then posed with group’s “Save the Internet” banner as they began to chant: “Don’t let the Internet die. Time to reclassify.”

The protesters, from the group Popular Resistance, are among millions of Internet activists who have called for the FCC to reclassify broadband as a public utility, which would give the agency much more authority to regulate Internet providers and prevent them from cutting deals with content companies to deliver their Web pages to consumers more quickly.

Reclassification has become the defining issue in the debate over “net neutrality,” or the idea that all Internet traffic should be treated the same.

What the protesters didn’t know was that they were about to get a huge boost from the biggest ally they could ask for. Later that morning, President Obama released a detailed statement calling for the FCC to reclassify broadband.

The episodes left Mr. Wheeler, who ended up taking the subway to work, blocked in more ways than one.

The FCC chairman initially was reluctant to go the reclassification route, but has since said repeatedly that the option is on the table, in response to the public outcry.

He also has been resistant to a flat ban, in part because of his concern about being overturned in court. He favored an approach that presumed most such deals, known as paid prioritization, between broadband and content companies, would be illegal unless proven otherwise.

Most Internet activists are demanding the tighter regulatory regime of reclassification, saying it is more likely to hold up in court.

Mr. Zeese, for example, said an appeals court ruling in January throwing out the FCC’s last Internet rules was clear that net-neutrality rules are possible, provided they come under Title II of the Communications Act, which regulates public utilities.

But it isn’t certain that reclassification would stand up to a legal challenge, or that the FCC would have the authority to ban the deals, even if it reclassifies.

Complicating the issue is that Title II itself doesn’t ban all forms of prioritization—only unjust or unreasonable discrimination.

In the past, that has meant that carriers are able to offer different tiers of service, as long as those deals are equally available to all parties on similar terms.

Broadband industry officials have argued that should the FCC attempt to implement a flat ban as the president has called for, they would lose in court.

“There is no substantive justification for this overreach, and no acknowledgment that it is unlawful to prohibit paid prioritization under Title II,” National Cable and Telecommunications Association President Michael Powell said in reaction to the president’s statement.

Marvin Ammori, an attorney who advises startups and Web companies in favor of net neutrality, called that argument “nonsense.”

Mr. Ammori said the FCC can define certain categories of behavior as inherently discriminatory, such as a broadband provider accepting money to make a website load faster.

FCC officials had recently settled on a so-called “hybrid” plan that would have reclassified only a portion of the broadband network, believing that would put them on stronger legal footing than full reclassification.

FCC officials had begun selling that plan around D.C. as a practical way forward, but the process was brought to a halt by the president’s statement.

If he does what the president asks, the resulting battles with the broadband providers and congressional Republicans could easily swallow the rest of his tenure, overshadowing a critical auction of TV station airwaves and the transition to digital phone service.

But if the chairman doesn’t go with full reclassification, he faces the possibility of being labeled as the former cable-industry lobbyist who sold out the Internet.

He would also be bucking the president who appointed him.

Moreover, he would risk losing support on his own commission, which is currently made up of three Democrats and two Republicans.

The president’s statement gives the other two Democrats, Jessica Rosenworcel and Mignon Clyburn, political cover to vote against Mr. Wheeler if they do not believe his rules go far enough, as they had indicated in May.

Various people who met with the chairman on Monday after the president’s statement have said he looked defensive and frustrated, and felt undercut by the White House’s statement.

Mr. Ammori was one of those at the FCC on Monday, and said Mr. Wheeler was “trying to convey that he does support an Open Internet and isn’t a bad guy.”

Mr. Zeese, on the other hand, was ecstatic after the president’s action.

“After Obama came out, we went back to [Mr. Wheeler’s] house that night. It was totally different,” he said. “We basically recognized that Obama had changed the momentum, and that Tom Wheeler had a whole ’nother level of things to think about now.”

“So we got there early and gave his wife a bottle of wine, and wrote on the card: ‘Looking for an Internet hero.’”

Write to Gautham Nagesh at gautham.nagesh@wsj.com

MORE PHOTOS FROM THE PARTY AT THE FCC (By Joe Newman)