Movement Victory: Over Five Million Workers Will Have Higher Pay On January 1

Above Photo: Raising the minimum wage is one of the most straightforward ways to lift pay for the lowest-paid workers in the economy. (Photo: SEIU)

On January 1, 2019, 20 states will raise their minimum wages, lifting pay for 5.3 million workers across the country.1 The increases, which range from a $0.05 inflation adjustment in Alaska to a $2.00 per hour increase in New York City, will give affected workers approximately $5.4 billion in increased wages over the course of 2019. Affected workers who work year-round will see their annual pay go up between $90 and $1,300, on average, depending on the size of the minimum wage change in their state.

The map below describes the impacts of each state increase, which are also summarized in Table 1. Note that these estimates do not account for changes in local minimum wages. There are 24 cities and counties with higher local minimum wages taking effect on January 1, all of which can be found in EPI’s Minimum Wage Tracker. They also do not include any “indirectly affected workers” already making more than the new minimum wage who receive raises as employers adjust their overall pay scales. 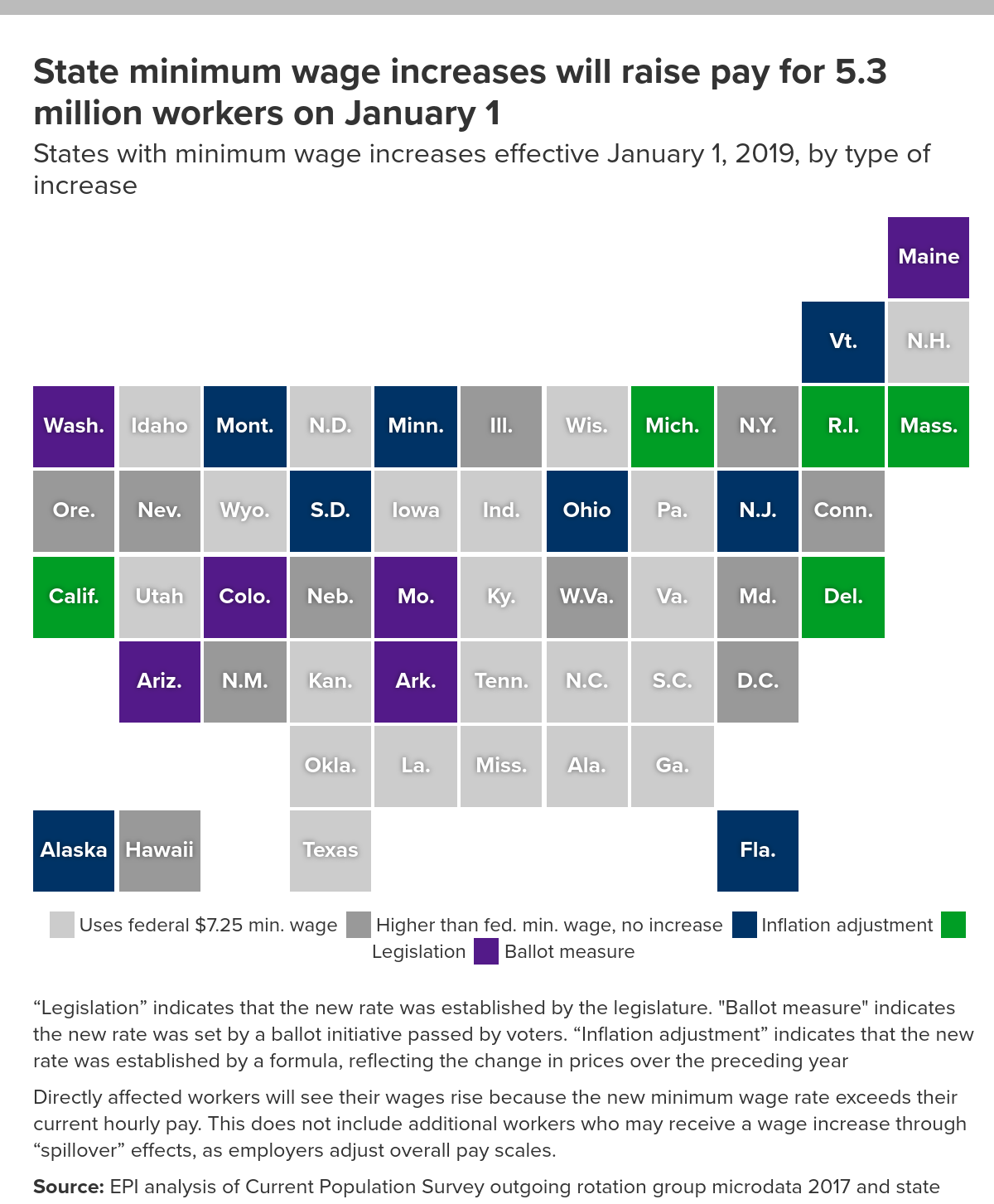 Increases in eight states are the result of automatic adjustments for inflation. In Alaska, Florida, Minnesota, Montana, New Jersey, Ohio, South Dakota, and Vermont, the minimum wage is adjusted each year to reflect changes in prices over the preceding year—thereby ensuring that the minimum wage supports the same level of spending year after year.

The increases in the remaining six states—Arizona, Arkansas, Colorado, Maine, Missouri, and Washington—are the result of ballot measures approved directly by voters in those states. In recent years, as federal and state lawmakers in many states have failed to update minimum wages, voters have taken up the charge themselves, passing wage increases at the ballot box.

Not every state allows for these ballot referenda, and unfortunately in some states, lawmakers have intentionally denied wage increases that either passed or were likely to be passed by voters. The Council of the District of Columbia overturned a voter initiative that passed with 55 percent support that would have gradually raised and eventually eliminated the separate lower minimum wage that currently exists for workers who receive tips. In doing so, the D.C. Council undermined pay increases for thousands of the city’s tipped workers, who are predominantly people of color.

Similarly, the GOP-led state legislature in Michigan took extraordinary steps to deny a wage increase for hundreds of thousands of workers in the Wolverine State. In September 2018, the Michigan legislature adopted, as legislation, a ballot initiative that had been scheduled to be on the November ballot that would have raised the state minimum wage to $10 per hour on January 1, 2019, with subsequent increases raising it to $12 by 2022. The measure would have also established automatic inflation adjustment after 2022, and would have gradually raised and eliminated the lower minimum wage for tipped workers. By adopting the initiative, the legislature removed the measure from the ballot, denying the state’s citizens the opportunity to vote on the proposal. Then, after the November election, the legislature watered down the legislation so that the minimum wage will instead reach $12 by 2030—eight years more slowly—with no further automatic inflation adjustments and only a $0.07 increase to the tipped minimum wage. Governor Snyder signed the legislation into law.

As shown in Table 1, had the Michigan ballot measure taken effect as it was written, nearly 320,000 Michiganders would have received a raise, with the average directly affected worker who works year round receiving over $900 in income. Instead, state lawmakers shrunk the wage increase so much that only 136,00 workers—nearly 200,000 fewer—are likely to get a raise, with the average year-round affected worker getting an annual pay increase of only $270.

Raising the minimum wage is one of the most straightforward ways to lift pay for the lowest-paid workers in the economy. After decades of policy choices that have suppressed wage growth for the most workers, it is encouraging that policymakers and voters have increasingly embraced this simple and effective policy tool. The flurry of state minimum wage increases that have taken effect in recent years have led to sizable gains in wages for millions of workers across the country. Yet there are 21 states that still use the federal minimum wage of $7.25 per hour. With a new Congress taking office in January, perhaps there is hope that the millions of workers earning low wages in those states will finally get a boost to their paychecks.

1. This includes New York, where the minimum wage increases take effect on December 31.