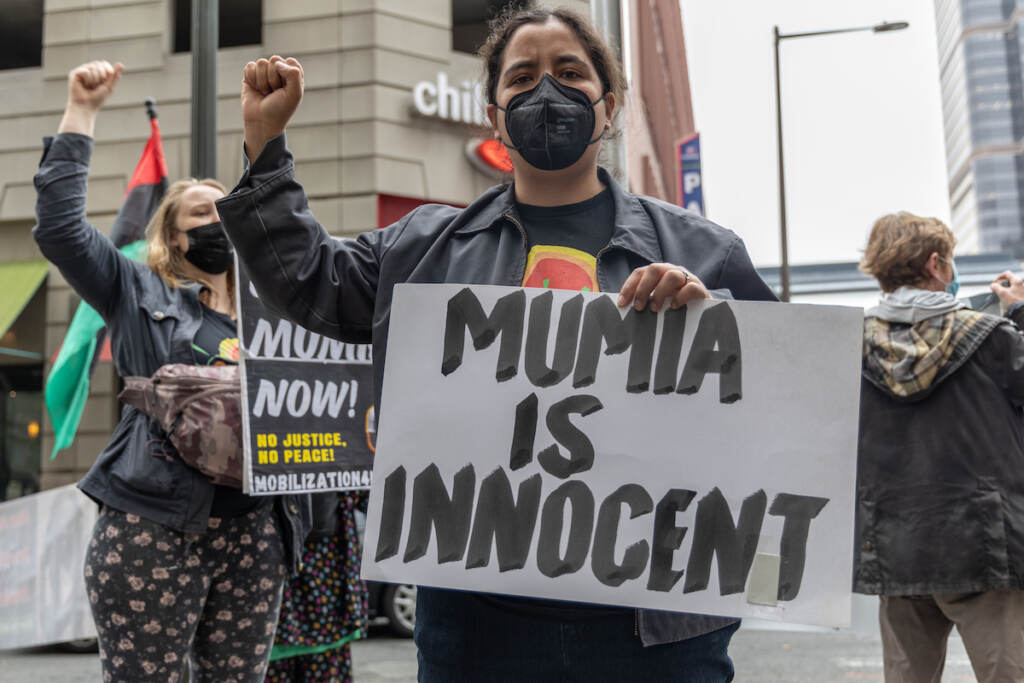 Above photo: Sarah Torres lives in Detroit but came to Philadelphia to rally outside the Criminal Justice Center during a hearing on Oct. 26, 2022 to determine if Mumia Abu-Jamal, convicted in the 1981 murder of police office Daniel Faulkner, would receive a new trial. Kimberly Paynter/WHYY.

Abu-Jamal’s defense petition included newly discovered evidence that had been buried in the prosecutor’s own files.  This evidence documented key witnesses receiving promises of money for their testimony and evidence of favorable treatment in pending criminal cases. The petition also documented the abhorrent and unconstitutional practice of striking Black jurors during Mumia’s original trial.

Racism remains the ELEPHANT in the room.

“I am going to help them fry the n—word”
–Original trial court Judge Albert Sabo said this in front of court clerk Terri Maurer Carter and fellow Common Pleas Court judge Richard Kline during the first week of Mumia’s 1982 trial.

Philadelphia ADA Jack McMahon made the policy clear in a 1986 training tape stating that getting “a competent, fair and impartial jury. Well, that’s ridiculous,’…“You don’t want smart people. But if you’re sitting down and you’re going to take Blacks, you want older Blacks.”

If you put thick blinders on that block out all reality and rely on procedural minutia for cover, honestly, it is still impossible to avoid the scorchingly blatant racism of trial judge Albert Sabo, Assistant District Attorney Joseph McGill, Mayor and former police chief Frank Rizzo, District Attorney during Mumia’s trial Ed Rendell, and Ron Castille DA on appeal.

Yesterday, Judge Lucretia Clemons in her oral statements from the bench continued a common practice of adopting wholesale the Philadelphia District Attorney’s positions. These positions only seek to preserve convictions at all costs.  These arguments prevent the defense from putting on the record evidence of discrimination.  PCRA procedural rules such as time bar, due diligence, waiver, previously litigated, all avoid a judicial review of the merits.

The racism is so transparent and indefensible so the DA is using court created law to dismiss cases before hearing new suppressed evidence. This is a blatantly dishonest practice routinely used by the prosecution and the courts when everyone knows, and I mean everyone knows, that racism was a hallmark of the original trial.

Striking Blacks from the Jury

Judge Clemons stated that she was dismissing the claim of striking Black jurors on procedural grounds, without addressing the merits of the claim.  She suggested that former counsel for the defense had not sought prosecutor McGill’s previously buried notes (notes that highlight his impermissible race based tracking and discrimination). Clemons adopts the prosecution position that the defense had the opportunity to receive these notes by merely asking the prosecution or cross examining ADA McGill in prior court proceedings. This is a key and deliberate misreading of the record. At no time were these crucial notes and the motivations that guided ADA McGill ever available to the defense. McGill struck Black jurors at a 71% rate, significantly higher than the strike rate for white jurors. His reasons for seating some white jurors and not seating nonwhite jurors were not on the record, they were in his notes.

One only has to look at the McMann training tapes that were made by the Philadelphia DA’s office which instructed district attorney’s how to strike black jurors. These were made after Mumia’s trial but they document the practice which was the norm in the office.  This is the context for this ruling which misstates the record and ignores the reality in these Philadelphia courtrooms.  Judge Lucretia Clemons and her law clerks complained on the record about how long it took them to find Pennsylvania cites to bolster their opinion.  Why is Judge Clemons working so hard to avoid the elephant in the room?

Additionally, at issue is the note from supposed “eye witness” Robert Chobert that asked ADA McGill after the trial “where is the money that is owe to me?” This note was scrubbed from any filings and buried by the prosecution for 40 years. This dramatic “Brady evidence” previously unavailable to the defense, was dismissed by the Judge in her written opinion as not “being material.” Meaning it would not have affected the jury’s verdict.  Underlying this is the wholesale adoption of the credibility determinations of the original trial court judge Albert “I am going to help them fry the n—word” Sabo.  It allows his racist tainted rulings to stand.

She also dismissed records from ADA McGill that extensively track and monitor another key witness Cynthia White, who’s pending criminal cases were ALL were dropped by the prosecution following her testimony.

How can the court ignore the context.  Note this information which follows had been previously prevented from being added to the record by Albert Sabo and other judges on appeal:

Photos from the Philadelphia Bulletin that prove Robert “I was on probation, did not have a license to drive a cab, and threw a Molotov cocktail into a school for pay” Chobert was not parked at the scene of the shooting. Chobert could not have witnessed the shooting. He was NOT parked directly behind the officer’s car as he claimed to be.  The answer is: because the PCRA (Post Conviction Relief Act) allows the dismissal of this critical evidence through by time bar.

Finally, Judge Lucretia Clemons admonished the defense to limit their briefs challenging her proposed ruling to cite Pennsylvania law.  It is commonly understood here, rather than being the birthplace of liberty, Pennsylvania is the place where the US Supreme Courts constitutional standards for criminal defendants are the very last place to be honored.

This case proves that racism reigns unabated in the American justice system, Mumia Abu-Jamal is the canary in the coal mine.

Judge Clemons’ 31pg proposed opinion will be available today, 10-27-22. The Defense has 20 days to reply, and prosecution given 10 additional days to respond before the court’s order dismissing Mumia’s request for a new trial becomes final and appealable.

Mumia Abu-Jamal is a broadcast journalist and internationally recognized author. Mr. Abu-Jamal is serving a life sentence at SCI Mahanoy in Pennsylvania. He is the author of 13 books, holds a Master’s degree in Comparative Literature and is currently working on the requirements to complete a PhD in the History of Consciousness Department at University of California Santa Cruz.