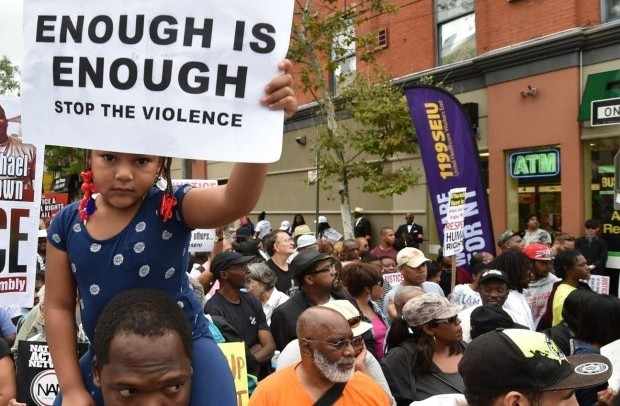 Murder Of New York Police: Violence Will Not Reduce Violence

Note: Below are two statements by #BlackLivesMatter and Ferguson Action on the murder of two police officers in New York City.

Popular Resistance joins in solidarity with #BlackLivesMatter and Ferguson Action in being shocked and saddened by the deaths of two police officers in New York.  We extend our sympathy to the families, friends and colleagues of the people killed by an obviously troubled person.

Civilian violence is not the solution to police violence, indeed it will lead to an escalation of violence. We need to de-escalate violence between police and the people and do not want to do anything to encourage its escalation.

It is important to emphasize that these murders were not connected to the movement against police abuse, brutality and racism. The three murders by a troubled man, two police officers and his former girlfriend, are not acts of protest but of someone who needed help. Organizers of these nationwide protests have consistently emphasized nonviolence.

Peaceful protests across the country have begun to move the issues surrounding the re-making of the relationship between police and the people. Popular Resistance does not want to see that progress undermined by violence, especially the killing of anyone — civilian or police.

New York, NY – Ferguson Action, the wide coalition first conceived in Ferguson, MO and recently responsible for the series of highly organized responses to police killings and abuses nation-wide has issued the following statement in response to the murder of two NYPD officers in Brooklyn earlier today:

“We are shocked and saddened by the news of two NYPD officers killed today in Brooklyn. We mourned with the families of Eric Garner and Mike Brown who experienced unspeakable loss, and similarly our hearts go out to the families of these officers who are now experiencing that same grief. They deserve all of our prayers.

“Unfortunately, there have been attempts to draw misleading connections between this movement and today’s tragic events. Millions have stood together in acts of non-violent civil disobedience, one of the cornerstones of our democracy.  It is irresponsible to draw connections between this movement and the actions of a troubled man who took the lives of these officers and attempted to take the life of his ex-partner, before ultimately taking his own. Today’s events are a tragedy in their own right. To conflate them with the brave activism of millions of people across the country is nothing short of cheap political punditry.

“Elected officials and law enforcement leaders must not allow this narrative to continue, as it only serves to heighten tensions at a time when the families of those killed are in mourning.

“We stand with the families in mourning, we stand united against senseless killings, and we stand for a justice system that works for all.”

Ferguson Action, is a broad coalition of groups working against police violence.

New York, NY –  #BlackLivesMatter, a national grassroots and social media driven movement at the heart of much of the recent mobilizations against police violence has issued the following statement in response to today’s murders of two NYPD officers:

“Our hearts grieve with New York, a community already reeling from the losses of Eric Garner, Ramarley Graham, Kimani Gray, Akai Gurley, Islan Nettles and many more. An eye for an eye is not our vision of justice, and we who have taken to the streets seeking justice and liberation know that we need deep transformation to correct the larger institutional problems of racial profiling, abuse, and violence.

“We know all too well the pain and the trauma that follows the senseless loss of our family members and loved ones. We extend our hearts and prayers to the families of those who lost their loved ones this week. No one should suffer the loss of those whom they love.

“At the heart of our movement work is a deep and profound love for our people, and we are rooted in the belief that Black people in the U.S. must reassert our right to live be well in a country where our lives have been deemed valueless. Together, we champion a complete transformation of the ways we see and relate to one another.

“Our movement, grown from the love for our people and for all people, will continue to advance our vision of justice for all of us.  Let’s hold each other close as we work together to end violence in our communities—once and for all.”

#BlackLivesMatter is an ideological and political intervention in a world where Black lives are systematically and intentionally targeted for demise. It is an affirmation of Black folks’ contributions to this society, our humanity, and our resilience in the face of deadly oppression.