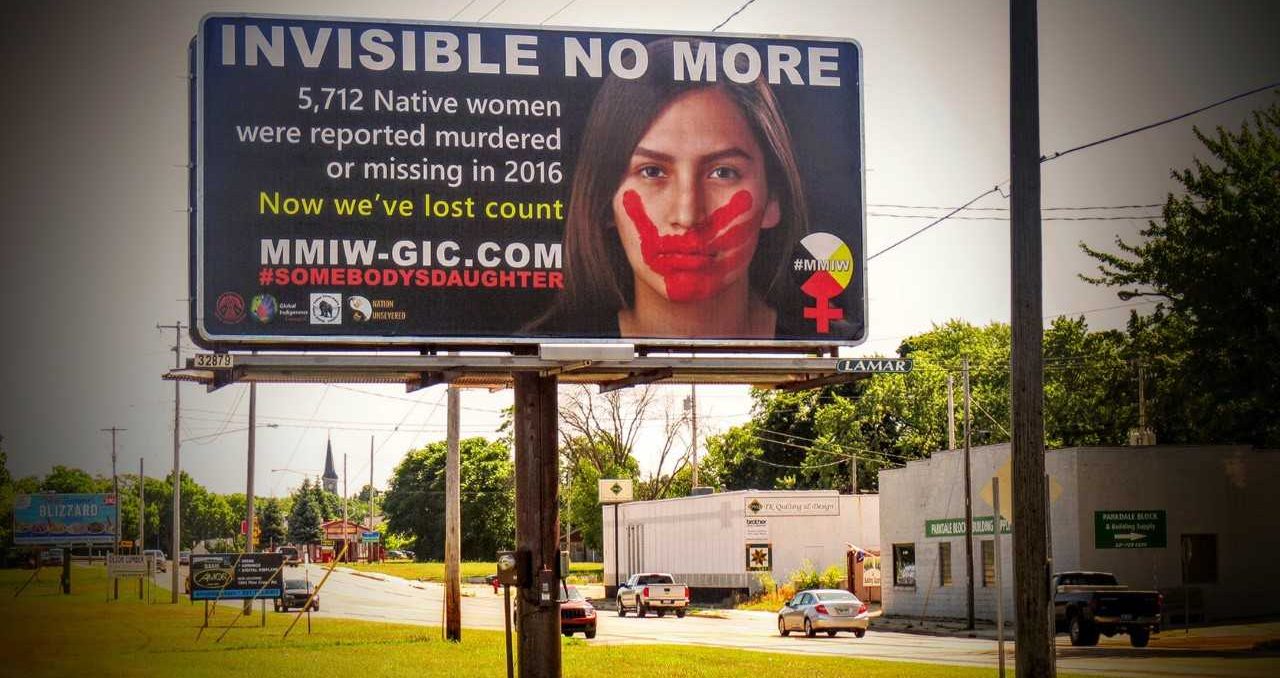 Above photo: MMIW billboard in Manistee, Michigan, home of the Little Band of Ottawa Indians. Photograph by Cecilia LaPointe

Manistee, Michigan – A national campaign to raise awareness and build momentum for meaningful federal legislation to impact the Murdered and Missing Indigenous Women (MMIW) tragedy arrived in the Great Lakes this past Thursday. Backed by members of the US House and Senate as diverse as Congresswoman Alexandria Ocasio-Cortez (D-NY) and Senator Steve Daines (R-MT), the region’s first MMIW billboard was placed in Manistee, Michigan, territory of the Little River Band of Ottawa Indians.

“The Native Justice Coalition (NJC) has just launched our MMIWG2S (Missing and Murdered Indigenous Women, Girls, and Two-Spirits) Project. There has been a growing movement across Canada for several years and now the Global Indigenous Council has started this national MMIW billboard campaign, which has been publicly supported by the first Native American women ever elected to Congress, Rep. Deb Haaland (D-MN) and Rep. Sharice Davids (D-KS). NJC is honored to partner and participate in this initiative,” said Cecelia Rose LaPointe, executive director of the Michigan-based Native Justice Coalition.

The Murdered and Missing Indigenous Women (MMIW) billboard campaign was conceived by the Global Indigenous Council (GIC) in association with the Rocky Mountain Tribal Leaders Council (RMTLC) and the Great Plains Tribal Chairman’s Association (GPTCA), tribal organizations that represent every tribe in the Rocky Mountain and Great Plains BIA regions. The billboards have appeared in states from Arizona to Montana, and this past week reached the Great Lakes. LaPointe said the next billboard is scheduled to appear in Duluth, Minnesota.

“So far omitted from the raft of proposed MMIW legislation are measures to address the human trafficking“tracks” that result in Native American women and minors being forced into sex-slavery on container ships between US and Canadian waters. Duluth, Minnesota, has long been a hub for this misery. In the wake of the recent MMIW Inquiry findings in Canada, now would be an opportune time to include this in legislation. This is not a new development; it has been happening for decades, but nothing has been done. We aim to change that,” committed Lynnette Grey Bull, vice president of the Global Indigenous Council.

“This billboard campaign is one of the most important things that can be done for the MMIW epidemic, because without awareness there will be no change. People need to know that this has been happening for decades. This is a way to bring it to their attention,” said Senator Jon Tester (D-MT), former Chairman of the US Senate Committee on Indian Affairs. The GIC-RMTLCGPTCA alliance worked with Senator Tester on his Studying the Missing and Murdered Indian Crisis Act.

Many of the recommendations petitioned for by the alliance have received bipartisan support on Capitol Hill and are reflected in MMIW bills introduced in the 116th Congress. North Dakota’s former-Senator, Heidi Heitkamp, the original sponsor of Savanna’s Act, describes the MMIW billboard campaign as “one of the most powerful and important things” to undertake. “This is a very important campaign and it will bring much needed awareness to the ongoing tragedy,” said Senator Lisa Murkowski (R-AK), who has reintroduced Savanna’s Act in the 116th Congress with Senator Catherine Cortez-Masto (D-NV).