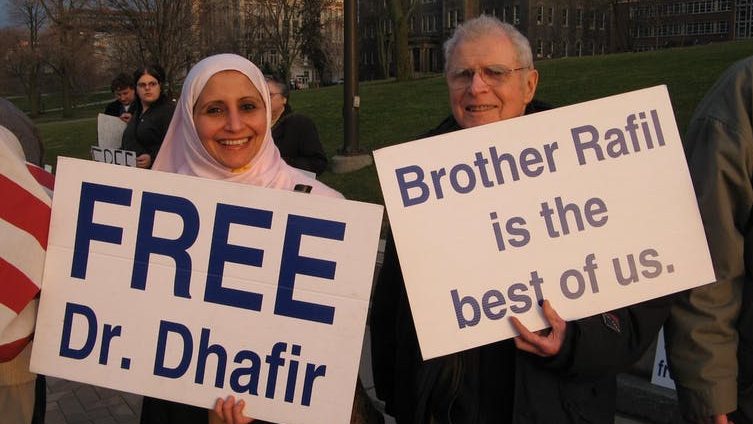 On the morning of May 15, Dr. Rafil Dhafir was released to home confinement from the Allenwood federal prison in central Pennsylvania. The Iraqi-American physician who has worked internationally with Doctors Without Borders has been in federal prison since the day of his arrest more than 17 years ago in 2003, on the eve of the second U.S. invasion of Iraq. He was not due to be paroled from his 22-year sentence until November, 2021. Dhafir will now complete that term at his home near Syracuse, New York.

A combination of factors described in the Bureau of Prisons (BoP) COVID-19 management plan added up to Rafil Dhafir’s eligibility for release now. Many of his supporters wrote to the warden following the March 26 memo from Attorney General William Barr to the Director of the BoP that outlined the plan. Dhafir is 71 years old and was being held at a low-security institution. He has a compromised immune system due to diabetes. He had no conduct violations within the last year. He had demonstrated a re-entry plan that both maximizes public safety and reduces his risk of exposure compared to continued confinement, and local authorities confirmed that he posed no danger to the community based on his crime of conviction.

The prosecution of Dr. Rafil Dhafir and his continuing punishment while in the custody of the BoP stand as a shameful monument to a particularly cynical and legalistic abuse of the civil and human rights of Muslims in the United States during the so-called War on Terror.

Since the events of September 11, 2001, the U.S. government has raided and closed down six major Muslim charities and many smaller ones, accusing each of funding terrorism. In every case, alleged “guilt by association” meant that the charities’ assets were frozen and their principals arrested. Yet despite new investigative powers and surveillance technologies, prosecutors failed to produce any evidence of actual terrorist financing by these Muslim charities.

Dr. Dhafir, a leader in the Islamic community of upstate New York, was the founder of one of these charities. As a direct response to the humanitarian catastrophe created by the Gulf War and U.S. and U.K. sponsored sanctions on Iraq, he founded the charity Help The Needy (HTN). For 13 years he worked tirelessly to help publicize the plight of the Iraqi people and to raise funds to help them, contributing significantly himself over the years. As an oncologist, he was also concerned and spoke out about the effects of depleted uranium ammunition on the Iraqi population, which was already experiencing skyrocketing cancer rates.

Dhafir and other HTN associates were subjected to high-profile arrests (“Kidnapped!” says Dhafir) in the early morning of February 26, 2003, just weeks before the second U.S. invasion of Iraq. Simultaneous to the arrests, between the hours of 6 and 10 a.m., law enforcement agents interrogated 150 predominantly Muslim families in the Syracuse area because they had donated to HTN. Like several other Muslim charities and philanthropists after 9/11, from the day of his arrest Dhafir was repeatedly slandered in the media as a funder of terrorists. He was held without bail for 19 months before trial, greatly impeding his ability to prepare his defense.

The first indictment against Dhafir contained 14 charges related only to the Iraq sanctions. Later, when Dhafir refused to accept a plea agreement, the government, which had seized all of his business records, piled on nearly four dozen more charges.

Seven government agencies investigated Dhafir and Help the Needy. They had intercepted his mail, email, faxes and telephone calls; bugged his office and hotel rooms; went through his trash; and conducted physical surveillance. They were unable to find any evidence of links to terrorism and no charges of terrorism were ever brought against Dhafir.

No less than the U.S. Attorney General and Governor of New York had publicly accused him of funding terrorists. But nearly two years later at his trial, prosecutors successfully petitioned the judge to exclude any mention of terrorism from the proceedings. While the prosecution hinted at more serious (terrorism) charges throughout the trial, the defense was prohibited from addressing the inflammatory innuendos head-on.

Dhafir was found guilty on 59 counts of violating the economic sanctions imposed by the United States on Iraq, and white-collar crimes related to his charity and Medicare fraud.

The newly added Medicare and related charges usually involve fictitious patients and made-up illnesses; Dhafir’s case had none of this. The government never contested that patients received care and chemotherapy medicine. Its argument for all 25 counts was, because Dhafir was sometimes not present in his office when patients were treated, the Medicare claim forms were filed incorrectly and he was not due any reimbursement for treatment or for the expensive chemotherapy his office had administered. The government even acknowledged that the amount of allegedly fraudulent payments he received was greatly exceeded by Dhafir’s personal contribution of $1.4 million to the charity.

In October, 2005, Dhafir was sentenced to 22 years in prison. A series of post-conviction appeals and motions for reduction of sentence were all denied. Co-defendant Ayman Jarwan was sentenced to 18 months and deported to his native Jordan upon his release in December, 2006.

That same month, Rafil Dhafir was one among the first group of 16 men, including 14 Muslims, to be moved into the now-notorious Communications Management Unit (CMU) in the old federal death row at the Terre Haute, Indiana prison. Prisoners in the CMU had all of their communication with the outside world monitored. All correspondence and phone calls had to be in English, and for some time, letters were all routed through Washington, D.C. for review. Visits were non-contact and monitored live, and in 2008, an FBI agent was even introduced into the unit to mingle and surveil from within during the day.

Dhafir was held there for over five years, during which time his health continued to deteriorate. He was moved to the Devens Federal Medical Center for prisoners in Massachusetts in 2012.Twice while held at Devens, Dhafir was placed in solitary confinement for investigation of unspecified rule violations, only to be released weeks later with no hearing and no charges. A few weeks after the second incident, in January, 2019, Dhafir was abruptly moved out of Devens and straight into the Metropolitan Detention Center in Brooklyn. At that time, MDC Brooklyn was in the midst of a complete power outage during record freezing that lasted for days. Prisoners, including Dhafir, were subjected to lockdown in total darkness and near-freezing indoor temperatures without added blankets. Two weeks later, he was moved on to the federal prison at Allenwood, from where he has now been released.

In a rare interview given shortly before being sentenced in 2005, Dhafir deflected inquiries about his own feelings.

“Why are we still staying away from the real issue? The real issue is the thousands and thousands of people who died in Iraq… The children in Iraq: That’s what you and I should be talking about. That’s what you and I should be weeping about… My anger, if there is any, is for those Iraqi children and those cancer patients who did not need to suffer.”

Thanks to Bob Elmendorf of the Dr. Dhafir Defense Committee, whose summary of Dr. Dhafir’s case contributed to this report and can be found at bit.ly/DhafirSummary2.