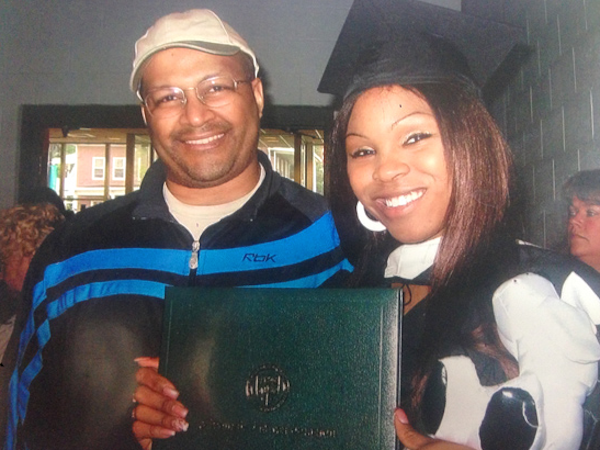 My Cousin Was Shot Dead By A Police Officer

Charles Goodridge with his daughter, Shaniqua. Photo courtesy of the author.

My cousin, Charles Goodridge, was one of many unarmed black men killed by police this past summer. Black communities across the country have mobilized in response to this spate of high profile police killings.

Much of the recent organizing and activism has rightfully focused on the destructive role of police in the black community. But as my cousin’s and other victims’ stories reveal, fighting to eradicate racist policing is not enough—as long as a racist economy is left intact.

An economy that did not lead to concentrated poverty and racial segregation could have prevented this deadly altercation.

On July 9, Charles was shot and killed by a police officer in Harris County, Texas. According to police, Charles had been evicted from his apartment but was spotted in one of the building’s common areas by Francisco Ruiz, an off-duty police officer who lived in the complex and was working a second job as a security guard. Ruiz got his gun and handcuffs from his own apartment and tried to arrest Charles for trespassing. Charles resisted and fled, but Ruiz caught him and shot him twice in the stomach.

I believe that if Charles had been white, the officer who killed him would not have been so quick to arrest or shoot him. But before he was a victim of racist policing, Charles was a victim of a racist economy.

Photo courtesy of the author.

In 2009, at the height of the recession, Charles was forced to resign from Hewlett-Packard—his employer since 1995—after he filed a racial discrimination suit against the company. People of all colors struggled to find work during the recession, but the labor market was especially brutal for blacks. Charles was never able to find steady employment again. His savings evaporated and he lost his apartment.

Though he had once been a resident of the building where he was killed, economic devastation turned him into a trespasser. If it weren’t for a racist economy, my cousin would likely still be alive.

Charles’ case is not isolated. Economic woes have precipitated other recent police killings of unarmed black men. In New York City, police killed Eric Garner as they tried to arrest him for selling untaxed cigarettes. He had been arrested dozens of times before for petty, nonviolent crimes committed while trying to survive. If Garner had access to other economic options, he probably wouldn’t have been selling “loosies” in the first place.

In Ferguson, Mo., Michael Brown seems to have been stopped for no reason other than being a young black man in a low-income, black community. Generations of economic marginalization and discriminatory housing policies led to him living in a neighborhood where police patrols were frequent and heavy-handed. An economy that did not lead to concentrated poverty and racial segregation could have prevented this deadly altercation as well.

The new economy movement has taken on the ambitious goal of unifying many communities and struggles by finding common ground and identifying shared goals. For example, much work has been done in the last decade to unite the historically white and wealthy environmental movement with “frontline communities”—those most affected by climate change—which are home to a disproportionate number of poor people of color. Just last month, that work resulted in frontline communities leading the People’s Climate March in New York City.

Yet, while economic oppression and violent policing go hand-in-hand, the struggles against them have, thus far, been largely isolated from each other.

In an article headlined “What’s the Role of Race in the New Economy Movement? ” Penn Loh suggested that those building a new economy “need to support and ally with the leadership and initiatives for economic transformation already underway in communities of color.”

I would take Loh’s suggestion a step further and point out that not all the potential collaborations between the new economy movement and racial justice struggles are concerned with explicitly “economic” issues. Eric Garner’s death could inspire a network of co-ops that employ people like him and help them avoid livelihoods that increase their contact with police. Michael Brown’s death could spark the growth of community banks that help build black wealth and reduce the type of concentrated poverty that is often the backdrop for violent altercations with police. And Charles Goodridge’s death could present a new angle to push for corporate accountability.

There are many opportunities to bridge the divide between the two movements. Those working to create a new economy must recognize these opportunities and strive to create systems that serve communities of all colors.

Anand Jahi has worked as an organizer, activist, and mentor. He is currently a Masters in Public Affairs Candidate at Princeton University’s Woodrow Wilson School of Public and International Affairs. Read more from Anand at www.reignfall.net.

This post was written for the New Economy Coalition’s second annual New Economy Week, an event exploring what it will take to build an economy that works for people, place, and planet. To learn more, visit New Economy Week.