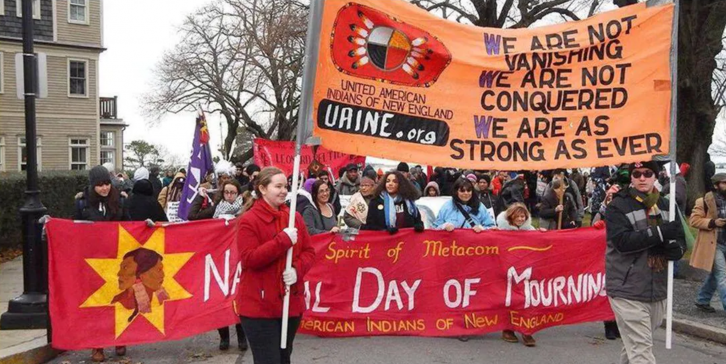 My Grandfather Founded The National Day Of Mourning

Above Photo: Kisha James (L) at a National Day of Mourning protest in 2013. Steven Kirschbaum.

I’m Carrying On His Legacy.

Every Year, I March To Tell The True History Of The European Conquest Of The United States.

On Thursday, millions of families across the United States will celebrate Thanksgiving without giving much thought to the truth behind the heavily mythologized and sanitized story taught in schools and promulgated by institutions. According to this myth, 400 years ago, the Pilgrims were warmly welcomed by the “Indians,” and the two groups came together in friendship to break bread. The “Indians” taught the Pilgrims how to live in the “New World,” setting the stage for the eventual establishment of a great land of liberty and opportunity.

In the usual narrative, no further mention is made of the Native people, as if they all faded away. By sanitizing the English invasion of Wampanoag homelands, the Thanksgiving myth blatantly disregards the true history of the Pilgrims’ arrival in America and the centuries of violence and oppression that Indigenous peoples have endured as a result of the colonization of the Americas.

I know the Thanksgiving myth well. For my entire life — 22 years — I have gathered annually with hundreds of other Native Americans and supporters in Plymouth, Mass., on the fourth Thursday in November. We gather and march to challenge this myth, to tell the true history of the European conquest of the United States, to speak about the devastating and continuous impacts of colonization on Indigenous peoples. We gather to declare Thanksgiving a National Day of Mourning for Native Americans.

The protest was founded in 1970 by my grandfather, Wamsutta Frank James, a member of the Wampanoag Tribe of Gay Head (Aquinnah).

His story of the founding of the National Day of Mourning goes like this: In 1970, the Commonwealth of Massachusetts invited my grandfather to give a speech at a banquet celebrating the 350th anniversary of the arrival of the Pilgrims. However, when state officials saw an advance copy of his speech, they refused to allow him to give it, labeling it as too “inflammatory.” My grandfather had revealed in his speech the truth about the Pilgrims and their treatment of the Wampanoag, the often-unnamed “Indians” in the Thanksgiving myth.

He described how the English even before 1620 had brought diseases that caused a “Great Dying” — nearly decimating our people — and how they took Wampanoag people captive, selling them as slaves in Europe.

The meal Thanksgiving dinner is modeled after is misremembered, too. Although there may have been a meal provided largely by the Wampanoag in 1621, it was not a “thanksgiving”; and the Wampanoag people certainly weren’t invited. Rather, the first official “thanksgiving” has its origins in 1637, when White settlers massacred hundreds of Pequot men, women and children on the banks of the Mystic River in Connecticut.

Within 50-odd years of the arrival of the Pilgrims and other Europeans, the Wampanoag and many other tribes had been nearly wiped out because of warfare and disease, and had been dispossessed of most of their ancestral lands. Those who resisted were killed and their families enslaved.

State officials offered to rewrite my grandfather’s speech to ensure that it presented a more sanitized version of history, but he refused to have words put into his mouth and was disinvited from the banquet. His suppressed speech was printed in newspapers across the country.

But that wasn’t enough: My grandfather and other organizers decided that something had to be done in Plymouth to ensure that the truth about the Pilgrims would be loud and clear.

On Thanksgiving Day in 1970, Wamsutta Frank James, along with other Native activists and allies, gathered on a hill above Plymouth Rock to speak about the true history of Thanksgiving, the violent history of the European settlement of the United States, the lasting impacts of colonization, and the social and political issues faced by Indigenous peoples.

They declared it a National Day of Mourning for the millions of Indigenous peoples killed as a result of European colonization. United American Indians of New England (UAINE), the organization that my grandfather founded and led for decades, has continued for more than 50 years to organize National Day of Mourning and challenge the mainstream Thanksgiving narrative, as well as highlight the modern-day struggles faced by Indigenous peoples.

My grandfather was heroic, and I am proud to be his granddaughter and help lead UAINE as we continue our work. But I also have noticed over the years, and especially while going through old newspaper clippings, that for decades the media often focused solely on the men as spokespeople and organizers of National Day of Mourning.

Women from the Boston Indian Council and other organizations played a key organizing role from 1970 on. My grandmother Priscilla helped write my grandfather’s 1970 speech. A Native activist, Judy Mendes, was attacked by police dogs in 1972 for wearing an upside-down American flag.

My mother, Mahtowin Munro, has been a major contributor to the National Day of Mourning and a tireless advocate for Indigenous rights. She and my late father, Moonanum James, became the co-leaders of UAINE in 1994. My twin brother and I learned from a young age how to patiently explain to non-Native peers and adults why we did not celebrate the U.S. Thanksgiving holiday. We are not against giving thanks or family gatherings, I’d tell my classmates; in fact, we are taught to give thanks every day. But we will not give thanks for the invasion of the Pilgrims and other Europeans, nor for the ongoing colonialism and genocide that our communities continue to face.

Now, I am the co-organizer of the National Day of Mourning along with my mother. I feel a great sense of pride in my family’s role in the Indigenous rights movement and in sharing the truth about Thanksgiving, and I look forward to continuing to raise awareness about contemporary front-line Indigenous issues such as climate justice, the preservation and expansion of tribal sovereignty, and the ongoing demand for the return of our ancestral lands.

In recent years, my mother and I have worked to ensure that women’s voices, as well as those of Two-Spirit and LGBTQ people, are amplified at the National Day of Mourning. When I look at the Line 3 struggle or at the Indigenous people who were on the streets in Glasgow demanding climate justice, I see Indigenous people of all ages, and especially women and Two-Spirit leaders, as part of a continuum of resistance leading into the future.

Women have long been at the center of Indigenous activism, and are respected and revered within many traditional Indigenous cultures as leaders and culture-bearers — even if they were silenced by settlers. That’s why it’s crucial for our voices to be amplified within modern-day movements, especially because settler-colonial violence continues to disproportionately impact women, as evidenced by the ongoing epidemic of Missing and Murdered Indigenous Women in the United States and Canada.

We will not stop telling the truth about the Thanksgiving story and what happened to our ancestors.