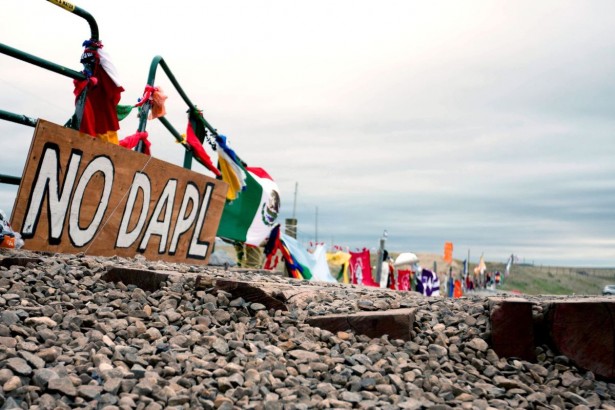 Above Photo: By Tailyr Irvine

MANDAN, N.D. — Gov. Jack Dalrymple said Thursday morning he will activate the North Dakota National Guard ahead of a federal judge’s ruling on a request by the Standing Rock Sioux to stop the four-state Dakota Access oil pipeline.

A handful of Guard members will help provide security at traffic checkpoints near the site of a large protest, Dalrymple said.

Maj. Gen. Alan Dohrmann, the head of the Guard, said another 100 Guard members will be on standby if needed to respond to any incidents.

Soldiers will not patrol the main protest encampment north of Cannon Ball.

“The Guard is not heading south,” Maj. Gen. Alan Dohrmann said during a news conference. “The Guard’s role here is to promote, like everyone else, public safety and to help out with law enforcement so we can free up officers with patrols cars to go down there and have a visible presence.”

About a dozen armed Guardsmen will relieve law enforcement officers at a traffic control checkpoint on Highway 1806 about 6 miles south of Mandan that was put in place Aug. 17 to restrict southbound travel to local traffic only, Dohrmann said.

That checkpoint will now be converted to a traffic information point, advising southbound motorists of potential hazards such as protesters and parked vehicles on or along the roadway while eliminating the detour to Highway 6, officials said.

An additional 100 Guard members will be on standby alert if needed for response efforts, Dohrmann said.

Dalrymple said public safety is paramount and the state is committed to protecting the rights of peaceful and lawful protesters.

“At the same time, we must make sure that peace is maintained this weekend,” he said, adding the steps “are being taken out of an abundance of caution. We simply want to make sure we are prepared.”

The move comes in advance of an expected ruling Friday on the Standing Rock Sioux Tribe’s request for an emergency injunction to halt construction of the pipeline, which will cross the Missouri River less than a mile north of the Standing Rock reservation. The tribe fears the pipeline will leak and contaminate its water supply and sacred sites, and its lawsuit claims the corps failed to consider the historical and cultural significance of that area.

Highway Patrol Superintendent Col. Michael Gerhart and Morton County Sheriff Kyle Kirchmeier said the Guard’s help will free up patrolmen and deputies being brought in from across the state so they can create a visible presence on the roadways and better respond to calls for assistance.

Kirchmeier said residents between Mandan and the protest camp have reported being intimidated, harassed and threatened, citing one report of a vehicle with out-of-state plates playing “chicken” with local residents.

“Law enforcement has done everything we can do not to escalate the situation with the protests, but our hands are being forced at this point by unlawful acts and aggression actions taken by protesters within the protest groups,” he said.

Authorities also want to make sure they have more manpower available to respond to instances of protesters trespassing on private land and binding themselves to Dakota Access construction equipment, Kirchmeier said, noting a third such incident was reported Thursday morning.

Dalrymple urged protesters to demonstrate “in a respectful and lawful way” and to “resist any pressure from others to violate the law and tarnish your message.”

Standing Rock Sioux Tribal Chairman Dave Archambault II, who was notified of the Guard action Thursday morning, also called on the thousands of self-described “water protectors” to greet the court decision “with peace and order.”

“Even if the outcome of the court’s ruling is not in our favor, we will continue to explore every lawful option and fight against the construction of the pipeline,” he said. “Any act of violence hurts our cause and is not welcome here.”