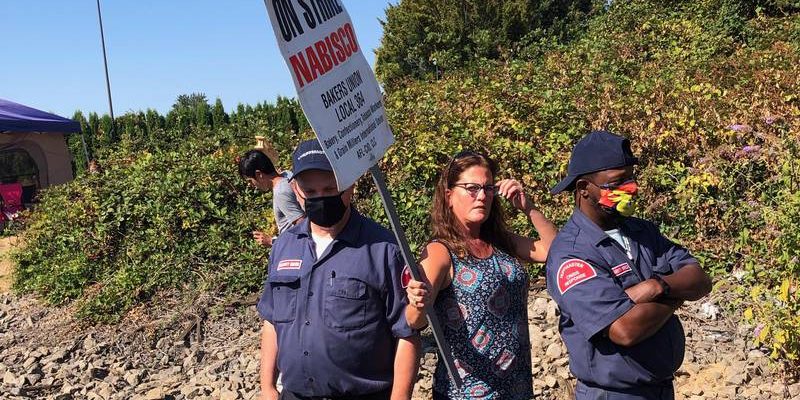 Police also kicked out strikers along the Union Pacific railroad tracks on Thursday after picketers blocked supply trains from coming into the bakery.

The Nabisco strike that began when union bakers walked out of the Oreo and Ritz factory along Northeast Columbia Boulevard on Aug. 10 continues to fester—but Nabisco’s parent company, Mondelez International, has taken aggressive steps to combat the strikers’ tactics and keep its operations running.

On Aug. 31, the company sent a cease-and-desist letter to the union warning strikers the company would pursue legal action if they didn’t stop interfering with plant operations.

And then, on Sept. 2, Portland police kicked strikers off property beside the railroad tracks where strikers positioned themselves to block trains carrying supplies to the bakery by holding up picket signs, which union railroad workers honored.

Nearly 200 members from the Bakery, Confectionery, Tobacco Workers and Grain Millers International Union Local 364 went on strike nearly a month ago to protest Mondelez’s proposed new contract. The union says the contract would strip away overtime pay and provide less robust health coverage. Every day since, strikers have waved homemade signs, wielded bullhorns, and cheered at cars whizzing along the major road where the bakery sits.

The Portland strikers touched off strikes at other Mondelez bakeries and distribution centers across the country. And since late August, a rotating group of strikers has occupied space near the Union Pacific railroad tracks to stop incoming trains carrying cooking oil, sugar and flour. Unionized railroad workers have honored the bakers’ picket line.

But Mondelez, which is currently operating the plant with nonunion replacement workers, recently took steps to preserve its supply lines.

On Thursday afternoon, Portland police officers told strikers they had to vacate their post alongside the railroad tracks within two hours.

That’s because, strikers say, Mondelez hired a land survey company to confirm that the small grassy patch of land the strikers occupied was company property. (WW could not independently confirm this because Mondelez did not answer questions about the matter and the survey company could not be reached by deadline.)

Portland Police Bureau spokesman Sgt. Kevin Allen says police received a call at 5:12 pm on Thursday. At 5:24 pm, cops told strikers to leave the disputed property. Strikers left within the hour, Allen said: “There was no report written, but the call notes suggest that it was a labor dispute. The officer said he talked to the employees and they agreed to leave within two hours. The officer notes that he did not believe any crime had been committed.”

Mondelez is also threatening legal action against the union. The company’s attorneys sent a cease-and-desist letter to the bakers’ union Aug. 31 warning strikers to halt hostile actions or they’d sue.

The letter alleged strikers had damaged Mondelez property, including using a knife to puncture the tire of a security car. The company also alleges the union has unlawfully blocked entrances and exits to the facility, including a parking lot Mondelez leased for replacement workers several miles from the bakery.

The attorneys allege the union is violating a portion of Oregon state law that regulates labor disputes.

Attorneys also acknowledge what the company has been reluctant to admit: that strikers are successfully reducing production.

“As the union is aware, there have been multiple instances in which strikers have unlawfully trespassed and congregated on the railway behind the plant. By doing so, they have impeded rail cars from delivering raw goods, such as sugar, that are necessary to the plant’s production. This unlawful interference wth the company’s business has now occurred multiple times and continues to impede the receipt of these critical materials,” the cease-and-desist letter reads.

WW reported last week that a group of leftist protestors took decisive actions to impede strikebreakers brought in by Mondelez to continue production through Huffmaster, a strike staffing company.

Mondelez’s attorneys, the Jackson Lewis firm, allege when strikers blocked their replacements by parking cars in strategic spots, the gambit backed up traffic on Columbia and created a “public safety hazard.”

“This conduct is unacceptable and unlawful,” the attorneys wrote. “The company demands that the union and its agents, officers, employees, and members cease this unlawful conduct immediately. As the union is aware, while engaged in a labor dispute, the union cannot prevent the delivery of critical supplies to the plant, cannot damage vehicles or other property belonging to the company, its agents, or its employees, and cannot block ingress and egress to the plant or to its off-site parking.”

The attorneys’ letter ended with a warning: “The company will seek immediate and appropriate legal and equitable relief if the union continues to engage in such unlawful activity, as well as all other available legal remedies.”

Cameron Taylor, the business agent for Local 364, says Mondelez’s attorney called him on Thursday and told him the company was seeking a temporary restraining order against the union. She told Taylor he was expected in Multnomah County Circuit Court the following day (his appearance ha since been pushed to Tuesday).

When asked what legal actions the company might take against the union, Mondelez spokeswoman Laurie Guzzinati wrote, “The cease-and-desist letter speaks for itself.”