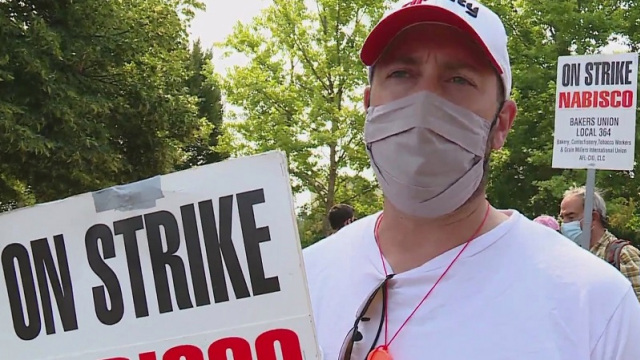 Nabisco Workers Are Now Striking In Oregon, Colorado And Virginia

Above Photo: Mike Burlingham is one of the striking workers at the Nabisco plant in Portland, August 14, 2021 (KOIN)

Striking workers at the Nabisco Bakery in Northeast Portland held a rally Saturday to highlight their demands for a fair contract.

Bakery workers, who walked off the job on Tuesday, were joined by members of other unions, including the AFL-CIO on Saturday. They want a better contract amid the fear their jobs will be moved out of the country.

Mondelez International, the company that owns Nabisco, said they are disappointed in the decision to go on strike.

In a statement, they said “their goal has been and continues to be to bargain in good faith with the union’s leadership across our US bakeries and sales distribution facilities.”

BCTGM International President Anthony Shelton issued the following statement in support of the members of BCTGM Local 26 (Denver, CO) who are on strike against Nabisco:

“Today, members of Local 26 went on strike against Nabisco in Aurora, CO. They join their striking Local 364 Brothers and Sisters in Portland, OR in taking a strong stand against Nabisco’s relentless outsourcing of Union jobs to Mexico and outrageous demand for contract concessions at a time when the company is making record profits.

The BCTGM International Union is proud of our brave members in Aurora and Portland who are on strike. They have the full and unbreakable support of the International Union for as long as it takes to achieve a fair contract that includes a solid commitment from the company to keep our jobs in the United States.”

BCTGM International President Anthony Shelton issued the following statement in support of members of BCTGM Local 358 (Richmond, Va.) who are on strike against Nabisco in Richmond:

“Earlier today, members of Local 358 at the Nabisco Bakery in Richmond joined their Brothers and Sisters in Portland, Ore. and Aurora, Col. in striking Nabisco. In all three locations, our courageous members are speaking with one clear, strong voice. They are telling Nabisco to put an end to the outsourcing of jobs to Mexico and get off the ridiculous demand for contract concessions at a time when the company is making record profits.

BCTGM members across this Union and across the country are coming together in solidarity with our striking Brothers and Sisters to take a stand against Nabisco’s shameful and destructive disregard for workers, their families and the communities in which they live.”