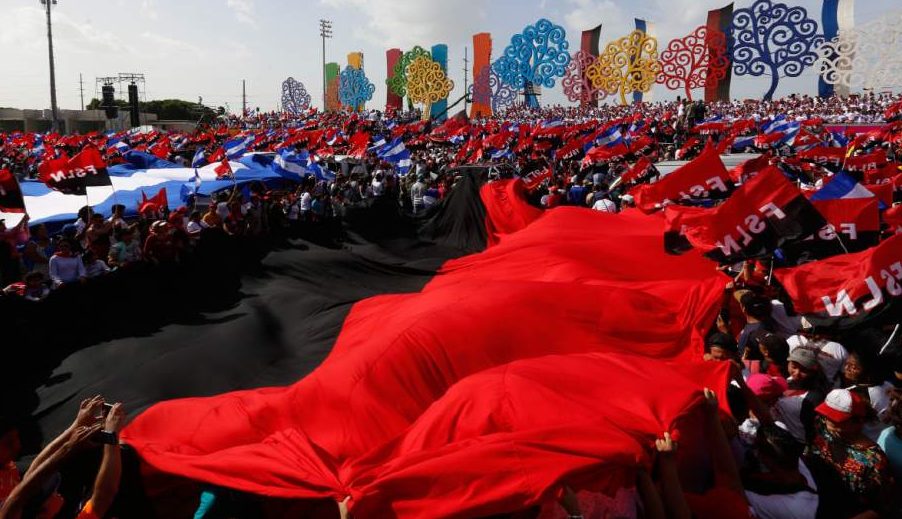 NACLA’s Shameless Apology Of US Imperialism In Nicaragua

In line with previous coverage of the 2018 crisis, NACLA’s latest article, The Anti-Sandinista Youth of Nicaragua, once again provides cover and legitimacy to the fascist regime change operation financed by the U.S. via the U.S. Agency for International Development (USAID), the National Endowment for Democracy (NED) and their affiliated agencies, which provided the funding that fueled the crisis. Anyone who finds such an assertion outrageous can read an article by the NED itself, published by The Global American, whose title says it all: Laying the Groundwork for Insurrection: a closer look at the U.S. role in Nicaragua’s social unrest.

The Global American article provides much insight into the role the U.S. has played in training and financing many of the groups cited by NACLA, financing that dates back to the 1980s, when the Reagan administration first created the NED which, in the words of its first president during a 1991 interview to the Washington Post“… does a lot of the work the CIA used to do 25 years ago.”  That work includes the very unrest NACLA praises as activism against what it calls the Ortega dictatorship, but without providing any evidence outside the narratives promoted by NGOs financed by said US agencies.

NACLA portrays Nicaraguan youth as being highly disaffected with the FSLN, claiming they reached a breaking point as a result of the violence in April of 2018. But for the youth to have reached a breaking point, they must have been the targets of state violence leading up to the April 2018 protests, an assertion that cannot be corroborated by any evidence, not by any US-funded NGOs, not by national or international media, or any local or international human rights organizations, or any other group whatsoever. The only claims of assassinations, massacres, widespread oppression, torture, disappearances or any other human rights violations have been propagated exclusively by US-funded entities, both national and international, and they all allegedly took place within the three-month period of unrest, spanning from April through July of 2018.

The article depicts the Sandinista Youth (J.S. for its abbreviation in Spanish) as a political and military front of the FSLN, used to spy on and control the population, a factor that, along with the fallout of the global recession and perennial inequality, explain the flight of youth from the J.S. and the FSLN in general. What the article doesn’t mention, is that while the global economy and perennial inequality were castigating neighboring countries, Nicaragua, up to the 2018 crisis, had enjoyed a steady rate of economic growth of approximately 5% for several years, had cut poverty in half, managed to increase access to electricity to 92% of the population (from 43%), greatly reduce infant and maternal mortality rates, provide universal healthcare and education, and achieve 90% food sovereignty. All throughout that time the Sandinista Youth played -and continues to play- a crucial role in the implementation of the programs behind the Sandinista government’s success; some of their roles include delivering food staples to Nicaragua’s poorest families, participating in healthcare programs to prevent mosquito-borne disease during torrential rains, delivering school supplies, and participating in political education programs.

Citing right-wing critics of the FSLN, including an article by La Prensa, a newspaper owned by one of Nicaragua’s wealthiest families with a history of supporting US intervention going back to the turn of the 20thcentury, NACLA continues its anti-Sandinista attack by pointing out the hand of the FSLN during massive protests following its 1990 electoral defeat. But the article doesn’t mention that the massive protests were in response to the neoliberal reforms implemented by the same US-funded political players behind the 2018 unrest. Such reforms saw the privatization of Nicaragua’s healthcare and education systems, its telephone and communications company, its electrical system, the reversal of the land reform, the massive firing of state employees, and the abandonment of the country’s infrastructure – which all led to an epidemic of hunger and disease, crime, violence, and skyrocketing mortality rates among Nicaragua’s most vulnerable groups, including poor pregnant women, children, and the elderly.

The article continues its tirade accusing the FSLN of issues of gender inequality and authoritarianism, completely leaving out the fact that today’s Nicaragua is one of three nations, along with France and Iceland, about to close the gender gap, according to the World Economic Forum, and that the “authoritarian regime” was elected democratically with 68% voter turnout and 72.5% of the popular vote during the presidential election of 2016.

It is truly sad to see NACLA’s persistent validation of US regime change in Nicaragua, a validation completely reliant upon the one-sided narratives promoted by a small army of USAID- and NED-funded NGO operatives. But rather than continuing to undermine each and every false assertion, I would like to conclude on a more positive note in the form of Nicaragua: the April Crisis and Beyond, with Dan Kovalik, a beautiful documentary that describes the crisis from the perspective of regular Nicaraguans, among them small business owners, peasants, small farmers, government officials, so-called political prisoners, and a small group of internationalists living in Nicaragua who witnessed the crisis first hand and bear witness to what one of them calls the black hand of the U.S. in the country’s unrest.