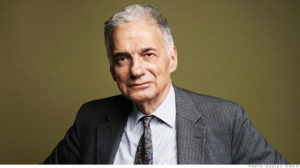 A group of activists led by Ralph Nader is calling on Attorney General Jeff Sessions to create an annual corporate crime database and annual report.

“For street crime, the FBI oversees the Uniform Crime Reporting (UCR) Program, which tracks data from over 18,000 local and state law enforcement agencies,” Nader and his colleagues wrote in a letter to Sessions.

“The Department of Justice should launch a parallel program for corporate crime and law-breaking, including but not limited to antitrust and price-fixing, environmental crimes, financial crimes, overseas bribery, health care fraud, trade violations, labor and employment-related violations — discrimination and occupational injuries and deaths — consumer fraud and damage to consumer health and safety, and corporate tax fraud onshore and offshore.”

“We are aware of the letter and will be reviewing it,” said Justice Department spokesperson Wyn Hornbuckle.

“A pittance invested here will go a long way toward promoting more lawful corporate behavior and the critical public support the Department of Justice needs for adequate enforcement budgets and stronger laws,” Nader and his colleagues wrote.

“The Department of Justice should produce and maintain a corporate crime database.  This is an elemental form of accountability. Street criminals have rap sheets — corporate law-breakers ought to have them, too. This could help to deter and punish such crime in many ways.”

“In addition, by making the database available online to the public for free, it would benefit countless journalists, criminologists and other scholars, investors, and others interested in crime in the suites.”

The Corporate Crime Database Act (H.R. 6545 in 111th Congress, H.R. 323 in 112th Congress) was introduced in 2010 to require the Department of Justice to establish and maintain such a database, and to make it available to the public via the Internet.

“More than one-third of a century has elapsed since the Department of Justice issued a thorough analysis of corporate crime in America (Illegal Corporate Behavior, October 1979),” they wrote.

“We are well into the 21st century, and non-governmental unofficial databases on corporate crime have been created to partially fill the void.

“The University of Virginia Law School has pulled together its Corporate Prosecution Registry. The Corporate Research Project has its Violation Tracker. But there is still no comprehensive official federal database of corporate crime in America.”

The letter also calls on the Department to issue an annual report on corporate crime.

“At a minimum, the report should provide an estimate of the total annual cost of corporate crime in the United States,” they wrote.

“It should include not only costs of crimes committed by individuals against businesses and investors (white-collar crime), but also the costs that corporate crime imposes on the rest of society, including the resulting deaths, injuries and property damage. In addition, millions of Americans lost their jobs, due to the financial crisis of 2008-9, which was caused by mortgage fraud and reckless speculative Wall Street gambling. Imagine Americans lost trillions of dollars because of financial sector greed and lawlessness.”

“The report should present an analysis of trends in corporate crime and an explanation of the relative effectiveness of various conventional sanctions, and the potential of new sanctions.”

“While the UCR Program does measure certain forms of white-collar crime, it is far from a thorough treatment of corporate crime.”

“The Department’s annual corporate crime report should also tally data about prosecutions and compile agency enforcement data, including budgets, descriptions, staff, and status of investigations. The report should also address the issue of unenforced noncompliance.”

“The report should include the number of cases referred to U.S. attorneys for prosecution each year by the FBI or other federal and state agencies, as well as the status and ultimate disposition — how many referrals were prosecuted, how many prosecuted were found guilty, how many settled with deferred and non-prosecution agreements, the magnitude and kind of penalties involved, how many cases settled.”