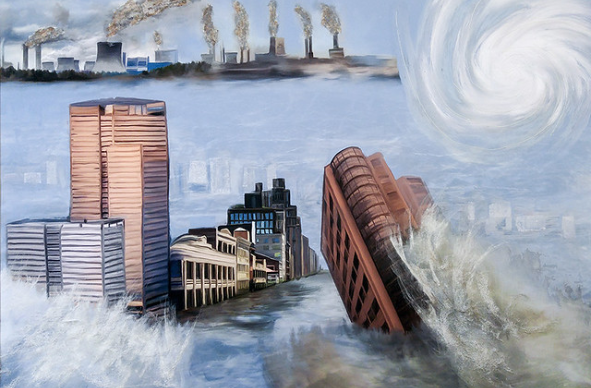 Nader: Trump Should Be Impeached For His Climate Policies

It is time to take Donald Trump’s disregard for climate crisis seriously. As Commander in Chief, Trump is abdicating his duties to protect his people, instead actively aiding and abetting the corporate polluters who are causing the climate chaos. Trump is wasting irreplaceable time that we need to prevent a worsening climate crisis. Trump’s actions, expanding the fossil fuel industry’s emissions, make the perils even worse. This is another reason for impeachment—climate crisis jeopardizes the American people in major ways.

Trump denies the overwhelming scientific warnings about the devastating destruction of the global climate crisis. He calls climate disruption a “Chinese hoax,” taking his delusionary persona to loony, dangerous levels.

The world is experiencing unheard of environmental upheaval: unprecedented heat waves, rapidly melting glaciers and permafrost, record floods, intensifying hurricanes, more frequent and severe droughts, and massive habitat convulsions. Despite the clear warning signs the worse is yet to come, Trump is shredding regulatory standards designed by law to curb the emission of greenhouse gases by fossil fuels, such as coal. He is opening large areas to oil and gas production, including those on our federal lands, the Arctic wildlife refuge, and offshore.

Trump has also decided to weaken Obama-era emission standards, a move that even upset some auto companies. Ford, Volkswagen, Honda and BMW all supported the stricter regulations set by California over those proposed by the Trump administration. Cutting back on energy efficient technologies releases more greenhouse gases, reduces gas mileage efficiency, and accelerates climate chaos.

It is as if Trump reacts to massive spreading wildfires by denying their causes, then doing nothing to diminish them. To make matters worse, it is as if he actively lowers environmental regulatory standards that would have played a role in preventing these fires.

The Pentagon keeps warning Trump and his cohorts that the climate crisis is a national security danger. Draft-dodger Trump can be charged with weakening our national defenses up against the destructive power of a perturbed nature.

Sea levels are rising. City planners at Miami Beach have an evacuation plan for tidal flooding, not just for exposed homeowners, but for the city itself.

Almost every week, the press, even Fox News, reports record-breaking natural disasters around the world. Just this last week, the Washington Post graphically reported changes in climate that have “set off a devastating chain reaction in the Sea of Okhotsk.” The giant eye-witness article is called “Weakening ‘the heart of the North Pacific.’” The melting ice and the warming sea have resulted in far fewer salmon (salmon catch is down by 70 percent since 2004). The New York Times recently published a page one feature on accelerating heavy rains and destructive droughts that wreak havoc on India’s agriculture and destabilize both urban and rural life. Another issue facing both India and Pakistan is the fast melting glaciers in the high mountains that feed the life-critical down-stream rivers below that sustain a billion people.

Leading scientists, led by climatologists, are putting out regular reports, rooted in evidence on the ground, which keep shortening the time before certain irreversible benchmarks, as with warming temperatures, are experienced.

None of this enters the cranium of the oblivious Donald J. Trump. He is too busy tweeting, scheming and slandering to further his own interests. Our nation’s interests are, to put it mildly, not his primary concern. He remains bent on pulling out of the voluntary Paris Climate Accord by the deadline next year. He is making America last again, behind over  196 nations who have signed the agreement to cut their carbon dioxide and other climate-disrupting gasses to keep the temperatures from rising to 3.6 degrees Fahrenheit.

Trumpland is where desired ignorance replaces presidential intellect, where reckless disregard of mounting property losses and human casualties become photo opportunities for alighting from Air Force One. Trump makes vague promises of aid only to then provide far less than what the devastated communities desperately need.

Translated into constitutional terms, Mr. Trump is deliberately refusing to enforce the laws mandated by Congress for environmental and workplace protection. He has given our government over to corporations, putting in charge corrupt corporatists qualified only to dismantle and disable these health and safety agencies. His crony capitalists are pushing out the scientists and crushing the civil servants who have sworn to uphold the law.

In making our country more defenseless against a mankind-driven upending of nature’s equilibrium, he gravely violates his oath to promote the general welfare and provide for the common defense. In a deepening emergency, he is stealing crucial years away from critical preparedness, as his own generals would tell him. Instead, he continues to mouth his insane phrase “beautiful clean, coal,” a mineral that once burned becomes one of the most deadly contributors to climate catastrophes.

Children are marching in the millions all over the world demanding that national leaders and big corporations in the fossil fuel industry move toward renewable, efficient energy with the utmost speed. These youngsters, who are doing their homework, are frightened over what will batter them in the coming decades. Trump should feel ashamed by their desperate pleas.

Our founding fathers often spoke of thinking ahead and respecting “posterity.” The desire to foresee and forestall was especially paramount for Benjamin Franklin and Thomas Jefferson, not to mention the prescient Thomas Paine. For them and their colleagues, Trump would have been seen as a monarchical nightmare or and an impeachable offender on the climate crisis alone.