No end of war in sight.

As we had expected the ceasefire in the war on Nagarno-Karabakh did not hold. Azerbaijani units, supported by Turkish mercenaries from Syria, have gained new ground (yellow, blue) on the lower grounds of the southern front. 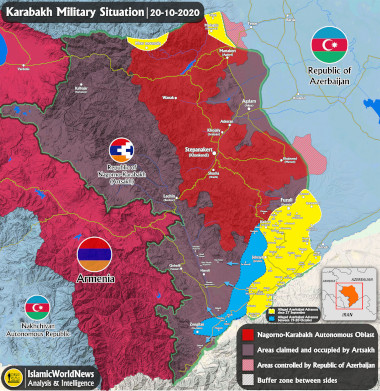 The topographic map shows that Armenian troops have left the hard to defend lower grounds and retreated towards the mountains. For Azerbaijahn to proceed onto higher ground will be much harder than the previous fighting.

The low ground also offered little protection for the Armenians from the massive aerial attacks by the Turkish and Israeli drones that Azerbaijahn is using. Armenian units had big losses of tanks and other equipment to aerial attacks.

However, during the last 36 hours, Armenia has shot down 8 drones. It seems to have finally found a way to detect and hit them. Canada has stopped the export of gimbal targeting turrets to Turkey. Without these the drones are blind. One recently destroyed Turkish Bayraktar drone had a very recent manufacturing date of September 2020. It is thus not a stock item. That together means that Erdogan’s son in law, who produces these drones, will soon have problems to supply more of them.

Another round of talks with Armenian and Azerbaijahni representatives has been held in Moscow today.

After today’s talks had ended the Armenian Prime Minister Nikol Pashinyan offered a rather dark outlook for the conflict:

301 🇦🇲 @301_AD – 12:19 UTC · Oct 21, 2020PM OF ARMENIA PASHINYAN LIVE:
1. I want to state that we must clearly realize that the Karabakh issue, at least from this stage and for the coming long time has no diplomatic solution. All the hopes, proposals that a diplomatic solution must be found are over.
2. Today, and during all this process, I highly appreciate the cooperation between Armenia and Russia. We feel the fact that the Russian Federation is a strategic ally of Armenia.
3. We proved in the 90s that there is no Armenia without Artsakh, and today this means taking up arms and fighting.
4. The situation leaves us with no choice but victory.
5. Yes, a rather complex situation has been created on the front line. Military operations are taking place all over the south of Artsakh.
6. Everyone who can, take up arms and fight for Artsakh – Nikol Pashinyan

The news from other side was likewise depressing:

Spriter @spriter99880 13:22 UTC · Oct 21, 2020Sad news about the results of the talks between the heads of diplomacy of Baku and Yerevan in Moscow. The main thing is to demonstrate the extreme intransigence of the attacking side.
The Baku delegate confirmed Aliyev’s mantra about “war to the bitter end”, which puts an end to the possibility of a hypothetical meeting of Aliyev himself with his counterpart.
…
The intensification of hostilities in Artsakh in the next 1-2 days is a likely scenario.

The fighting, seen here (vid) from the Iranian border, is fierce.

On Friday the Foreign Ministers of Armenia and Azerbaijahn are expected in Washington to hold talks with Secretary of State Mike Pompous:

According to U.S. government documents seen by POLITICO, Azerbaijan Foreign Minister Jeyhun Bayramov will meet first with Pompeo on Friday morning. His Armenian counterpart, Zohrab Mnatsakanyan, will meet shortly afterward with the U.S. secretary of State.
…
The United States, along with Russia and France, co-chairs the so-called Minsk Group, a body that has sought to mediate an end to the conflict over Nagorno-Karabakh.As the fighting has progressed over the past few weeks, Pompeo has appealed to Armenia and Azerbaijan to adhere to agreed-upon cease-fires, but such truces have rapidly collapsed. Pompeo also has urged Turkey, a NATO ally of the United States, not to deepen the crisis.

The U.S. has little to offer to either side. I do not expect any progress from those talks.

Here’s a simple suggestion for Secretary of State Mike Pompeo, who is scheduled to meet Friday with the foreign ministers of Armenia and Azerbaijan: The path to real negotiations and stability in Karabakh could begin with a no-fly zone over the enclave, enforced by the United States, Russia and France, the three co-chairs of the “Minsk Group” that had been fruitlessly attempting to settle the Karabakh issue since 1992.Pompeo has a big challenge. Russia and France brokered two cease-fires this month, and both failed. What’s needed is a plan that inserts the three big powers more directly in the Karabakh mess and provides a platform for addressing the underlying issues of sovereignty and refugees. The United States also wants to check Turkey, Azerbaijan’s ally, which Pompeo criticized in an interview this week for “coming in to lend their firepower to what is already a powder keg of a situation.”

Whoever thinks that a no-fly zone is a ‘simple suggestion’ is a simpleton. The idea is, as Daniel Larison provides, dangerous nonsense:

This is a terrible proposal for reasons that I hope are so obvious that they don’t need to be spelled out, but let’s review some of the chief problems. Ignatius has been banging the drum to “do something” about the new war over Karabakh for weeks, but this is the first time that he has explicitly called for military action. It is a mindless, reflexive demand for intervention that makes absolutely no sense. “No-fly zones” by themselves do not halt conflicts, and at best this would just expand the conflict to include more belligerents. It is difficult to see where U.S. planes would be enforcing this “no-fly zone” from, since it is doubtful Turkey would permit basing or overflight for such a mission, and there is a decent chance that the U.S. might have to enforce this “no-fly zone” against Turkish jets at some point. Ignatius’ proposal is hopelessly naive and extremely dangerous.Enforcing a “no-fly zone” against two countries at war would involve not only possibly attacking both belligerents, but then maintaining patrols for months and maybe even years in flagrant violation of the sovereignty of both states. Russia would obviously refuse to participate, and there would be no legal authorization for the mission from the U.N. or anywhere else. The U.S. has absolutely no right to do what Ignatius demands. It would further complicate an already difficult conflict, and even if it limited Azerbaijan’s ability to use drones against Armenian armor and artillery it would not prevent fighting from continuing on the ground. The U.S. has no vital interests at stake in this conflict. It would be absurd and irresponsible to interfere militarily in a conflict that truly has nothing to do with us. Ignatius doesn’t acknowledge, much less address, any of these problems, and his argument is typical of an unthinking interventionist mentality that immediately jumps to a military option before other alternatives have been exhausted.

I agree that the idea of a no-fly zone is silly. But wonder who told Ignatius to launch that trial balloon.

Was it Mike Pompous? What would he want to achieve with it?