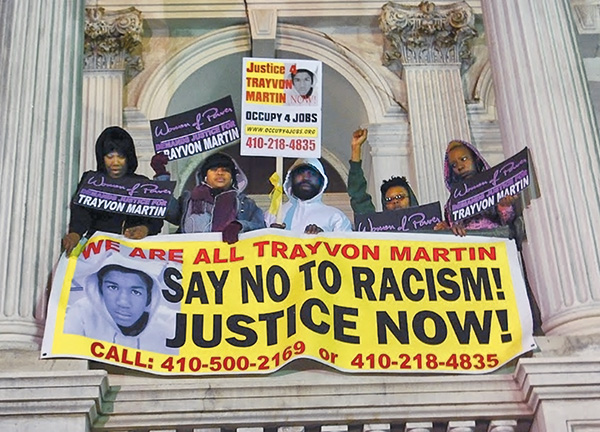 If George Zimmerman is found not guilty, the same day of the verdict and the day AFTER the verdict

SHOW YOUR OUTRAGE IN THE STREETS!

Plan to hold justice assemblies in downtown squares, in communities, at schools and at busy street corners in your city or town.  Distribute flyers; hold youth and community speak outs, marches and protests. The murder of Trayvon Martin should be generalized with other local cases of atrocities against youth, especially youth of color.

It’s critical at this moment for the movement to define this issue rather than the big business media or those who have little interest in defending Black, Latino/a, Indigenous and poor youth.

We are issuing this emergency call prior to the verdict because we have little faith in the so-called justice system which is riddled with racism and class bias; a system that jails over 2.3 million mainly people of color and keeps another 5 million under the repressive thumb of parole and probation status and a system that rarely successfully prosecutes racist police or wanna be cops like Zimmerman.

Show your outrage and solidarity in the streets & on social media. Use the hashtags:

Send us your rally, speak out and event information along with general support for this call to: info@peoplespowerassemblies.org
Post to us on Facebook at https://www.facebook.com/PeoplesPowerAssemblies

This call was issued by the Baltimore Peoples Power Assembly, founded at the 10,000 person March 26, 2012, Trayvon Martin demonstration in Baltimore City which shut downtown Baltimore and City Hall down for five hours. Organizers called for a people’s vote and the convening of the June 30, 2012 Peoples Assembly to Stop Police Terror and Abuse. Go to www.PeoplesPowerAssemblies.org
Call: 410-218-4835 or 410-500-2168 or 212-633-6646.