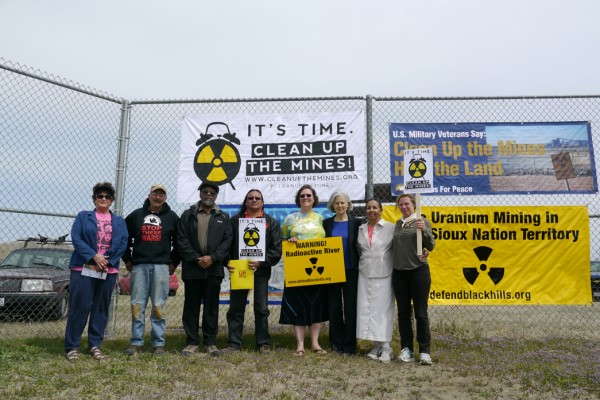 Red Shirt Village, Oglala Lakota Nation (SOUTH DAKOTA) –  Organizations from throughout the United States held an Earth Day ceremony to launch a nation-wide campaign to clean up hazardous abandoned uranium mines (AUMs). Clean Up The Mines! calls for effective and complete eradication of the contamination caused by the estimated 10,000 abandoned uranium mines that are silently poisoning extensive areas of the U.S.

Clean Up The Mines! volunteers from across the country toured abandoned mines this week. They donned hazardous materials suits at Mount Rushmore and carried a large banner to raise awareness of the 169 AUMs in the Southwestern Black Hills near Edgemont. There are another 103 AUMS in the Northwest corner near Buffalo. The Northern Great Plains Region of Colorado, Montana, Wyoming, North and South Dakota contains more than 3,000 AUMs.

In Riley Pass, one of the largest AUMs in South Dakota, the deadly effect of the mine was apparent. As the group approached the bluff, the tree line ended abruptly at the edge of the mine. At Ludlow, the group measured radioactivity with a Geiger counter at an elementary school playground that was 44 microrems/hour. This is the equivalent of more than 150 Counts Per Minute (CPM), over the 100 CPM threshold, which means it cannot be attributed to background radiation. During the tour, people from every community spoke of health problems related to uranium exposure and their high level of concern over the lack of information about the AUMs and action to remediate them.

Today, dozens from the community joined with members of organizations including Defenders of Black Hills, Clean Water Alliance, Dakota Rural Action, Peace Pagoda, Veterans for Peace, Popular Resistance and the Global Climate Convergence at the Cheyenne River Bridge. They posted signs stating “Warning, Radioactive River” to raise awareness of the radioactive contamination of the Cheyenne River caused by AUMs.

Afterwards, a rally was held in the nearby community of Red Shirt Village where residents cannot drink local water due to uranium and arsenic contamination. Robert Two Bulls, a local spiritual leader, initiated the campaign launch in prayer.

Charmaine White Face, a scientist and coordinator of Defenders of the Black Hills, facilitated the event. “For the American public to be exposed to radioactive pollution and not be warned by federal and state governments is unconscionable,” stated White Face. “Shame on the American federal and state governments for allowing their citizens to be placed in such danger for more than 50 years and not stopping the source of the danger. It is a national travesty.” She noted that thyroid cancer rates are ten times higher than the national average in Western South Dakota. Uranium exposure also causes birth defects, kidney disease and numerous other serious health conditions.

“The mines are a silent health threat. Millions of people are at risk of breathing or ingesting radioactive particles that travel through the air and water and settle in soil where they enter our food system.” Margaret Flowers M.D., an organizer with Popular Resistance. “From speaking to community members and taking our own measurements, we find enough evidence to say there should be more investigation and serious efforts to protect the people. That’s why this campaign to clean up the mines is so important.”

Sandra Cuny Buffington, from the Red Shirt community, a rancher with cattle in the Bad Lands, lived at the river until it wasn’t possible anymore because of contamination. She spoke of high rates of cancer in the area. “We know we are contaminated but where are we going to go? I don’t know of any other life than the one that I have lived. As crazy as it sounds, you learn how to live with it.”

“Abandoned uranium mines are devastating to the health of local populations,” explained Dr.  Jill Stein, organizer with the Global Climate Convergence, “The mines threaten not only our health but our economies and ecosystems as well. We’re here to insist on cleaning up the mines and transitioning to a clean renewable energy system. This transition can put Americans back to work while vastly improving our health. The health savings alone will pay for the costs of this transition.”

“Desecration of the land, the water, the very air we breathe. We see lack of concern for living beings, placing profit before people, before the living earth,” said Tarak Kauff, Board of Directors, Veterans for Peace. “The radiation affects more than just the first nation people living in close proximity. The wind and water carry cancer-causing substances much further. It up to us, an awakened public, ordinary black, brown, white and red people working together to demand, to insure that these toxic highly radioactive abandoned mines be cleaned up – for us and for future generations.”

“From mining, in-situ leaching (similar to fracking), milling, processing, nuclear bomb and energy, depleted uranium weapons to the waste products that have no grave, the only safe place for uranium is in the ground. Uranium and other radioactive materials have been poisoning our environment in increasing amounts since the 1940s,” said Helen Jaccard, volunteer with Clean Up The Mines. “Exploitative corporations and negligent government agencies walked away from their responsibilities.”

“If we don’t defend our sacred water it will be the end of us all,” added Dennis Yellow Thunder, Natural Resources Technician for the Oglala Sioux Tribe Natural Resources Regulatory Resources Agency. “We must support this campaign to clean up the mines. We need to protect this land, our water and the sacred Black Hills. We need to do it from our heart.”

White Face concluded, “Currently no laws require clean up of these dangerous abandoned Uranium mines. We are letting Congress know: It is time to clean up the mines! We value persistence. We will employ a variety of tactics including legislative and judicial avenues to hold the government and corporations accountable for their negligence and community-based actions to raise awareness and clean up the mines.”