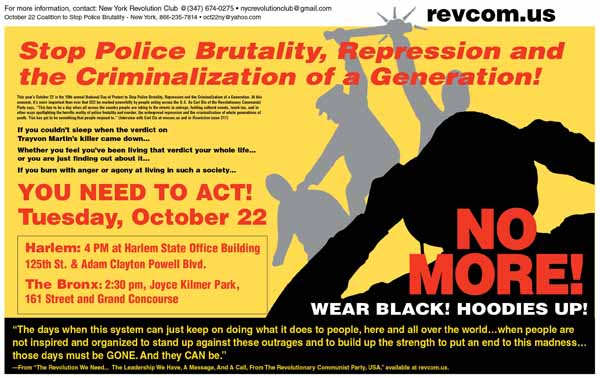 October 22-National Day of Protest to Stop Police Brutality, Repression and the Criminalization of a Generation

October 22, the 18th annual National Day of Protest to Stop Police Brutality, Repression and the Criminalization of a Generation, is less than two weeks away. So far, 15 cities in this country and one in Canada have announced plans to take to the streets on this day. This list needs to grow quickly. We need to have 50 or even 100 cities planning marches and rallies, cultural events, teach-ins, and more on O22.

Look at the horrors being inflicted on people. Police killing innocent, unarmed people is about an everyday occurrence. And these cops are almost never punished in any way for these crimes. Recently in some outrageous cases where cops were brought into court for killing people, those courts have dropped the charges or overturned convictions of killer cops. All this is unacceptable and it must be stopped! BE THERE ON OCTOBER 22 TO SAY NO MORE!!

Youth face being harassed, jacked up, beaten down, arrested, and worse for nothing more than being Black or Latino and in the wrong place at the wrong time. It’s three months since the Trayvon Martin verdict and the criminalization and demonization of our youth continues without letup. If you boiled with rage and disgust over that verdict, if you took to the streets when it came down, you need to act now.

Immigrants are being hit with raids by La Migra that tear families apart and disappear people. More than two million people are being warehoused in prisons across the country. 80,000 people are subjected to solitary confinement in those prisons, held in conditions that amount to torture. Five million are being treated like second-class citizens because they used to be in prison. People like Mumia Abu-Jamal, Lynne Stewart, Chelsea Manning, Edward Snowden, and many others have had the system’s repressive apparatus unleashed on them for standing up to the injustice being done to people and exposing the system’s crimes. One of those who stood up to decades of torture and solitary confinement was Herman Wallace, a courageous fighter for justice, a political prisoner who this system locked up for 41 years. Herman Wallace passed away on October 4. (See “Herman Wallace: Unrepentant Political Prisoner and Fighter for Justice” at revcom.us.)

The question is: Are we going to stand up and loudly say NO MORE to these horrors, or will they be allowed to continue? The impact of the Trayvon verdict isn’t over, the rage is still eating away at people, and the questioning it sparked among many is still going on, but there are forces working on suppressing all that; working on getting people to go back to looking to the channels the system has out there to deal with these issues. These forces can’t be allowed to succeed. This verdict came down to saying Black people have no rights that white people are bound to respect, and we need to make that verdict the beginning of the end for this system!

What can you say about a system that perpetrates this kind of injustice? That it’s illegitimate and no damn good. That it needs to be done away with thru revolution as soon as possible. AND that people need to engage in powerful resistance to the horrors it inflicts on people. A protest against the murder of Trayvon Martin at a high school in Denver, CO, April 2012. Photo: AP

Powerful outpourings on October 22 are a critical necessity. We must say in a loud voice: NO MORE to police murder, NO MORE to government repression, NO MORE to La Migra raids, NO MORE to mass incarceration and all its consequences, and NO MORE to criminalizing the youth.

Today is a time of spreading upheaval in the country and the world—the intense infighting within the ruling class that has shut down the federal government, the attacks on the right to abortion and on voting rights, the wars for empire and more. Against this backdrop, this is a time to seize. A time for powerful resistance that gives a platform to those on the bottom of society whose lives are being devastated by abuse at the hands of law enforcement. As we do this, more people will be ready to hear the voices of those subjected to the most intense police brutality and murder on a daily basis. And more people will change how they think, and come to the side of those most directly under the gun.

OCTOBER 22 IS A PERFECT TIME TO ACT ON ALL THIS.

If you’re someone who’s fed up with being jacked up, harassed, beaten down, arrested, and worse by the cops, you need to act on O22!

If your eyes were opened to this abuse by the verdict in the Trayvon Martin case, you need to act on O22!

If you’re one of the actors, musicians, and other well-known people who tweeted “No Justice, No Peace!” when that verdict came down—well, we haven’t gotten justice, so you need to act on O22!

High school students and teachers need to mobilize their schools on O22!

College students and faculty members need to mobilize their campuses to act on O22!

Religious leaders need to address this injustice in their sermons, and lead their congregations to take to the streets on O22!

EVERYBODY NEEDS TO ACT ON OCTOBER 22!

STOP POLICE BRUTALITY, REPRESSION AND THE CRIMINALIZATION OF A GENERATION!

HOODIES UP! WEAR BLACK, FIGHT BACK!