Above: Pro-net neutrality rally at the White House shortly before President Obama changed his mind and supported net neutrality which he and his FCC commissioner, Tom Wheeler, had opposed.

Urgent Action Needed to Protect the Right to Protest in Washington, DC 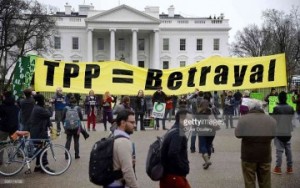 Find the steps to submit a comment at the bottom of this article.

The National Park Service has proposed major changes in rules for protests in Washington, DC that would severely undermine constitutionally-protected First Amendment rights. The National Park Service’s proposed rule changes put forward by the Trump administration and Secretary of Interior Ryan Zinke abride our Freedom of Speech, right to assemble and petition the government for redress of grievances. Below is information on how you can comment on these proposals. You must act by Monday, October 15, 2018.

You can view the comment submitted by Popular Resistance here. Read the affidavit submitted by Kevin Zeese: affidavit-for-the-nps-restrictions-of-the-first-amendment We focused our experience in organizing and participating in protests in Washington, DC, the history and impact of protest on changing the direction of the country, how protest is escalating and needs to be protected as well as on their responsibility to protect Constitutional rights and follow international covenants that the US has ratified. In addition, Popular Resistance joined with a coalition of organizations to submit comments prepared by the Partnership for Civil Justice. To read coalition comment download this file coalition-comment-on-nps-proposed-protest-rules. 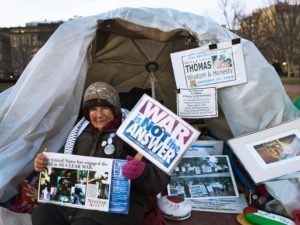 The proposed rules would require organizers to pay high fees and costs to hold a protest in Washington, DC. The proposals would ban protests on the White House sidewalk and greatly restrict protests in Lafayette Park across from the White House. Costs could include the expense of erecting barricades, paying the wages and overtime of Park Service officers and the cost of repairing grass. The proposals would also restrict spontaneous First Amendment activities and give the police power to cancel permits for any “infractions”. Long-term encampments like Occupy would be banned, as would long term vigils like the anti-nuclear vigil in Lafayette Park. 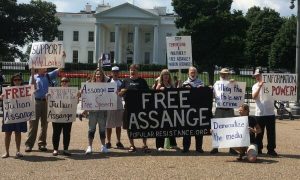 These restrictions would undermine hard-won victories for Freedom of Speech and the Right of Assembly in Washington, DC. We need people to take action now to comment on these proposals.

In an administrative proceeding like this, the evidence in the case comes from the record of public comments. Therefore we need you to write comments that reflect on the importance of protest at the White House and in Washington, DC. Popular Resistance will be submitting comments that cover our history of organizing and participating in protests in the nation’s capital, but your individual experiences will also be valuable.

Protest against the war on Syria by the ANSWER Coalition.

12 ways that the proposals undermine our constitutional rights

The Partnership for Civil Justice, which has litigated many cases involving DC protest, has developed an analysis of the proposed rules. Below are 12 ways that the proposals undermine our constitutional rights. 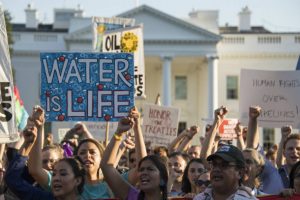 Remember your comment will help with stopping the National Park Service (NPS) from proceeding and could be helpful if these rules are challenged in court. They will provide evidence that lawyers can cite when arguing against these restrictions on our First Amendment Rights.
An effective comment will:

How To Submit Your Comments

You have until October 15, 2018 to make comments on the National Park Service’s proposed rule changes.

Your comments have to be submitted through the Federal Register.

We are not able to provide an automatic tool.