On the first day of the prison strike we’ve already seen hundreds demonstrating on both sides of the wall. Particularly where I reside in the Pacific Northwest, there have been reports of over 200 individuals incarcerated in Tacoma’s Detention Center participating in the Nationwide prison strike through work stoppages. In support of those on the inside demonstrations took place throughout Washington State as supporters march through the University of Washington’s Seattle campus. The university currently has contracts with Correctional Industries in which prisoners’ labor is responsible for the construction of the furniture in their campus housing and classrooms. 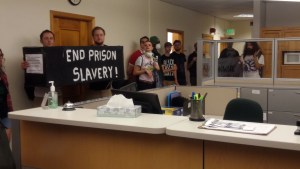 Many students have no knowledge of this, I was unaware of my college’s role in maintaining the prison industrial complex when I was a student. This is why myself along with students and residents of the city of Seattle protested the university’s relationship with correctional industries. We urged administrators to divest from prison slave labor as students and supporters marched through each floor of the administration building as well as through the on-campus Starbucks. I read of each one of Jailhouse Lawyers’ 10 demands in the center of campus’ Red Square in front of Odegaard Library. After chanting through the most popular areas on campus, demonstrators marched through the surrounding streets. We visited Howard S. Wright Jobsite, the office of the construction company responsible for building the new youth jail.

Washington state is a perfect example of how ‘progressiveness’ does not exempt a region from the abuse that happens behind bars. Prisoners are still forced to work for little to no wages, new detention centers are being built for young people and detainees are still suffering from forced family separation. There were several events that happened throughout the country today including an Awareness March at Plaza de Cesar Chavez in Oakland California and a Noise Demo at Elliot Park in Minneapolis, Minnesota.

We haven’t yet been able to receive reports from the majority of our participants behind the walls and look forward to receiving more news as their striking continues. It’s evident that supporters on the outside are committed to supporting prisoners in their acts throughout this time. It’s also evident that mainstream media is more committed to amplify prisoners demands than ever before. Today hundreds of organization as well as businesses and even political parties have added their hats to the ring in the fight against mass incarceration, demanding an end to prison slavery and the inhumane treatment of prisoners nationwide regardless of their status or location. While many are fighting for the cause there are still some that remain unaware of what prisoners are doing on the inside and it is and it is our responsibility as outside organizers to raise our voices and amplify their demands.

This morning myself along with formerly incarcerated outside organizer Cole Dorsey and Pulitzer prize-winning Heather Ann Thompson were featured on Democracy Now’s morning television broadcast, interviewed by Amy Goodman about the National Prison Strike. As I mentioned in the interview, our dollar is our vote in this system and when we choose to buy clothes or fast food or get our insurance or our gas in places that participate in prison slave labor, then we are fueling that system and allowing it to persist. You can find an extensive list of companies that participate in the prison industrial complex here. It’s incredible to see how news of this prisoner led movement has gotten the attention of mainstream media. Outside organizers are receiving tons of requests for media around the country we will be holding a press conference during the second date of the strike, tomorrow afternoon. If you are media person who is interested in being a part of the press conference call and have not yet received the details please contact prisonstrikemedia@gmail.com