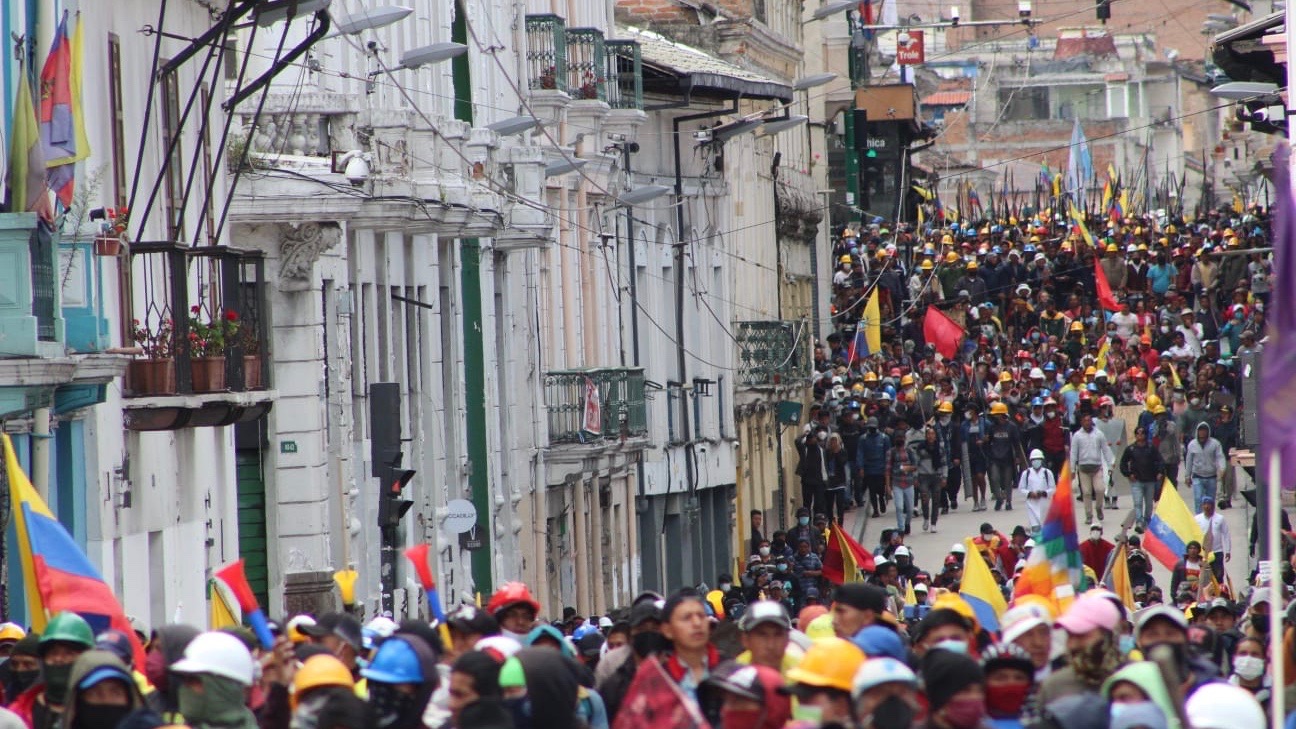 Above Photo: Hundreds of thousands of Ecuadorians held a massive march in capital Quito to mark 15 days of the national strike On June 27. CONAIE / Twitter.

Ecuadorian peasant, Indigenous and Afro-descendant organizations have vowed to continue fighting against poverty and deep inequalities in the country.

Despite persecution, criminalization and repression by the state.

Monday, June 27 marked 15 days since the beginning of the national strike in Ecuador against the right-wing government of President Guillermo Lasso and his neoliberal economic policies. Since June 13, hundreds of thousands of people have been organizing protests and roadblocks across the country with a set of 10 demands that support the working class in the face of rising inflation and cost of living.

On Monday, under the banner of “There are 10 demands, not 10 cents”, members of various peasant, Indigenous and Afro-descendant organizations held a massive march in capital Quito to mark 15 days of the national strike and reinforce their social demands. The demands include: reduction and freeze of fuel prices; employment opportunities and labor guarantees; an end to privatization of public companies; price control policies for essential products; greater budget for public education and health sectors; protection for people from banking and finance sectors; fair prices for their farm products; an end to drug trafficking, kidnappings and violence; ban on mining and oil exploitation activities in Indigenous territories and near water resources; and respect for the collective rights of Indigenous peoples and nationalities.

Two weeks of anti-government demonstrations and discussions on a no-confidence motion in the opposition-controlled National Assembly compelled President Lasso to increase monthly payment to poor families by 10% to USD 55, subsidize fertilizers, forgive debts of small farmers, and double the education budget for schools teaching in Indigenous languages, among other measures.

This weekend, he was forced to reduce fuel prices, although not by as much as the protesters had demanded. On Sunday, June 26, he announced that cut petrol and diesel prices would be cut by 10 cents a gallon. Extra gasoline dropped from USD 2.55 to USD 2.45 per gallon while diesel went down from USD 1.90 to USD 1.80 per gallon. The movements had demanded that the price of gasoline be reduced and fixed at USD 2.10 per gallon and diesel at USD 1.50 per gallon.

As expected, in the early hours of Monday, the main organizers of the national strike – Confederation of Indigenous Nationalities of Ecuador (CONAIE), National Confederation of Peasant, Indigenous and Afro-descendant Organizations (FENOCIN), and Council of Indigenous Evangelical Peoples and Organizations of Ecuador (FEINE) – rejected the announcement made by Lasso with respect to the reduction of fuel prices. The organizations in a statement said that the measure was “insufficient and insensitive” and “did not sympathize with the situation of poverty faced by millions of families.”

The organizations however emphasized that the President’s “announcement shows that the struggle of the Indigenous movement, other organized social sectors and of the citizens in favor of all sectors of the country is bearing fruits.” They pointed out that with the help of the popular struggle, half of the demands have already been achieved in addition to the lifting of the abusive state of emergency and recovery of the Benjamin Carrion Cultural Center.

The organizations affirmed that “despite persecution, criminalization and the repressive response of the State, which was ratified by the president in his announcement, they have remained firm and will continue to show the legitimacy of their fight.” They vowed to continue fighting against poverty and deep inequalities that exist in the country, and called on the people to remain on the streets. “Our struggle does not stop, neither does the right to resistance and the protest remains in force, despite the threats to criminalize and persecute us, we remain firm in our conviction that in Ecuador a dignified life is not the privilege of a few,” they said.

Following the organizations’ announcement and increasing social and political pressure, the government authorities finally agreed to negotiate with the protesters and invited the representatives of the Indigenous organizations to attend a meeting with the representatives of the executive, legislative, electoral, judiciary, and citizen branches of the state to discuss their demands on June 27.

During the meeting, the organizations clarified that they wanted the government to accept the two most substantial of the 10 demands: further reduction in fuel prices and repeal of decrees 95 and 151 which are related to the government’s hydrocarbon policy and were issued by Lasso in 2021. After hours of discussion, an attempt to sabotage the negotiation process, and delay in resuming the process after a recess by Government Minister Francisco Jiménez and other government officials, the organizations achieved another victory. They succeeded in convincing the government to repeal decree 95 and ban extractive activities in protected areas.

On the morning of June 28, the nationwide mobilization resumed. The representatives of the various Indigenous organizations reached the Basilica of the National Vow for the second round of dialogue, hoping to discuss the demands pending from the previous day. However, the government officials didn’t show up.

CONAIE condemned the government for abandoning the negotiation process. “The government breaks dialogue confirming its authoritarianism, lack of will and incapacity. We hold Guillermo Lasso responsible for the consequences of his warmongering policy. We demand respect for our highest representative. Lasso didn’t break the dialogue with Leonidas Iza (CONAIE’s president), he broke it with the people,” tweeted CONAIE.

Hours later, President Lasso in a broadcast on national television stated that his government had suspended talks following the death of a soldier in the Shushufindi canton in the early hours of June 28, who was killed in an attack allegedly carried out by the demonstrators.

Through a press conference, the representatives of the Indigenous organizations rejected the accusations and condemned the government for continuing the brutal police and military repression against peaceful protesters.

Citing videos circulating on social media platforms as evidence, the organizations reported that officials of the security forces fired live bullets at demonstrators who had been maintaining a roadblock in the November 18 community in Shushufindi canton.

The day before, during the negotiation meeting, the organizations criticized Interior Minister Patricio Carrillo for promoting hatred, racism and violence against Indigenous demonstrators and demanded his dismissal.

CONAIE President Iza said that “Mr. Patricio Carrillo is not a guarantor of democracy, we have really felt the hatred and racism with which he acts. He guarantees that the military and police celebrate after shooting down the protesters, so we suggest that they change the minister.” He also pointed out that members of the police had infiltrated the protests to provoke acts of violence and vandalism in order to later justify repression.

According to data from the Alliance for Human Rights Organization, between June 13 and 27, state security forces committed 74 types of human rights violations against citizens participating in the national strike, killed 5 protesters, detained 147, and injured 313 people.