National Weekend Of Action: US Out Of Haiti

Take the streets March 27 to 29 to show solidarity with Haiti and demand the United States stop interfering.

NOTE: For more background on the situation in Haiti, read “Urgent solidarity with Haiti is needed.”

March 29 is the anniversary of the 1987 Haitian Constitution written after the 1986 overthrow of the brutal Jean-Claude Duvalier dictatorship. The 1987 Constitution was designed to create “a socially just, economically free, and politically independent Haitian nation.” Those ideals are again in crisis.

The US-backed de facto president of Haiti Jovenel Moïse is refusing to leave office even though his term ended on February 7. Moïse and his Western allies – the US, Canada, Brazil, France, Spain and the European Union – are trying to push through a new constitution that takes power away from the people

The Haitian people have been bravely holding mass demonstrations, especially on Sundays, for months calling for Moïse to step down so they can appoint an interim leader and hold an election. The state response to their demonstrations has been violent repression.

Peace and anti-imperialist organizations in the United States spearheaded by the Black Alliance for Peace and Popular Resistance are calling for a weekend of actions from March 27 to 29 in solidarity with the Haitian people and against our government’s actions.

We demand that the Biden administration:
1. End its support for Jovenel Moïse.
2. Withdraw from participation in Haiti’s constitutional process.
3. Stop interfering in the internal affairs of Haiti.
4. Stop deporting Haitians who are fleeing their country.

Fill out this form to add your event to the weekend of actions.

Suggested targets are Haitian embassies and consulates in Washington DC, New York, Miami, Boston and Chicago, federal buildings such as ICE headquarters or highly visible areas. Use these hashtags to share photos of your actions when you hold them: #HandsOffHaiti #USOutOfHaiti

Miami – Saturday, March 27 at 4:00 to 7:00 pm. Family Action Network Movement (Miami) will host an activity in support of the Haitian people and in opposition to the growing dictatorship of Jovenal Moises, supported by the U.S. Biden administration, the UN, and the OAS. The activity will also call for TPS status for Haitian immigrants, and an end to deportations. Please join FANM at the Toussaint Louverture statue, located at the intersection of N. 62nd St. and Miami Avenue. Miami, FL., just east of I-95. Facebook event page.

Chicago – Sunday, March 28 from 12:00 to 1:00 pm at the Haitian Consulate, 11 E. Adams Street. Organized by the Black Alliance for Peace. Facebook event page.

Baltimore – Monday, March 29 at 4:00 pm at the Garmatz Federal Courthouse, Lombard and Hanover Sts. in Baltimore. We protest in solidarity with the Haitian people and against U.S. support of Haitian president Moise who has illegally overstayed his term since Feb 7, enforced by killings. Organized by Baltimore Peace Action. 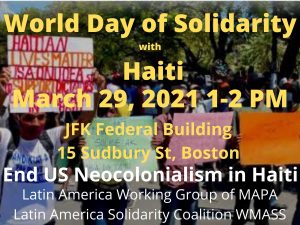 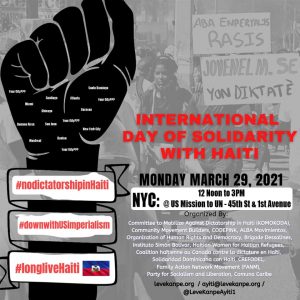 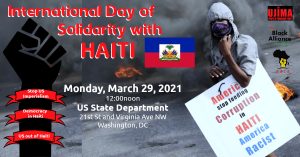