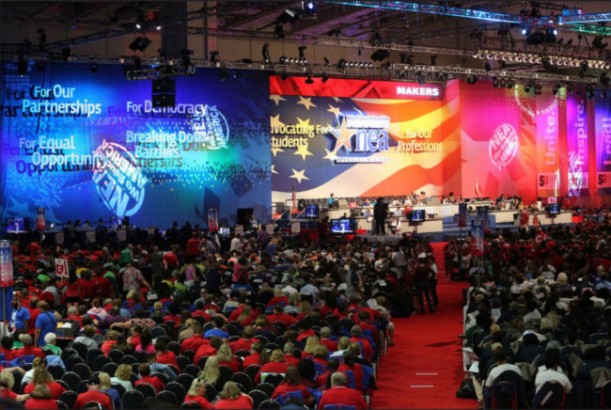 In May, the Portland, Oregon school board passed the country’s first comprehensive “climate justice” resolution. The school board voted unanimously to “abandon the use of any adopted text material that is found to express doubt about the severity of the climate crisis or its root in human activities,” and called for all schools to teach a “climate justice” curriculum. The Portland resolution said that students in city schools “should develop confidence and passion when it comes to making a positive difference in society, and come to see themselves as activists and leaders for social and environmental justice—especially through seeing the diversity of people around the world who are fighting the root causes of climate change…”

That effort received a big boost last week in Washington, DC, when the country’s largest union, the National Education Association (NEA), voted at its national convention to support the Portland resolution and to encourage state and local affiliates to create and promote climate literacy resolutions in their own communities, using the Portland resolution as a model. The NEA has close to 3 million members, and its convention is dubbed “the world’s largest deliberative assembly,” with 7,000 delegates.

The effort to pass the resolution was led by teacher delegates from Oregon, Washington, California, Wisconsin, and North Carolina, and included members of the national Badass Teachers (BATs) caucus.

Oregon teacher Kathleen Jeskey was one of the delegates supporting the NEA resolution: “Clearly teachers from all over the country see that it is past time to teach our students the real science of climate change and properly prepare them for the future. BATs is a caucus dedicated to social justice and we realized that no other social justice issue can be dealt with properly if we ignore the issues around climate.”

In addressing the convention, Jeskey paraphrased the Portland climate justice resolution: “We must commit ourselves to providing teachers, administrators, and other school personnel with professional development, curricular materials, and outdoor and field studies that explore the breadth of causes and consequences of the climate crisis as well as potential solutions that address the root causes of the crisis, and do so in ways that are participatory, imaginative, and respectful of students’ and teachers’ creativity and eagerness to be part of addressing global problems and that build a sense of personal efficacy and empowerment. Our schools must play a leadership role in modeling for students climate and environmentally friendly practices.”

NEA delegates passed a second resolution, sponsored by Noam Gundle of the Seattle Education Association, calling for the teachers union to “publicize the work of NEA members educating students and their communities on issues of anthropogenic (human-caused) climate change using innovative project-based learning and cross-curricular methods.”

There remains an enormous gulf between the severity of the climate crisis and the attention given the crisis in U.S. schools and in widely used text material. In testimony before the Portland school board in May, members of the community group Educating for Climate Justice, shared examples of textbooks currently in use in Portland schools. One passage in Physical Science: Concepts in Action tells students: “Carbon dioxide emissions from motor vehicles, power plants, and other sources may contribute to global warming.” The small section on climate change is filled with this conditional language of “may” and “might.”

A social studies textbook used in Portland and around the country, Holt McDougal’s Modern World History, begins its second of three paragraphs on climate change: “Not all scientists agree with the theory of the greenhouse effect.”

Portland’s resolution was passed with the support of more than 30 community groups including 350PDX, the Sierra Club, the Portland Association of Teachers, Columbia Riverkeeper, Oregon Physicians for Social Responsibility, the Climate Action Coalition, and the Raging Grannies.

The Milwaukee-based social justice education publisher Rethinking Schools has been distributing “seed packets” to parents, educators, and community activists around the country, which include a copy of the Portland resolution, supporting articles, an “Organizing Lessons from the Portland Climate Justice Resolution,” and excerpts from the Rethinking Schools book, A People’s Curriculum for the Earth: Teaching Climate Change and the Environmental Crisis.

The process of replicating the Portland climate justice resolution is already underway. The Seattle Education Association’s Noam Gundle plans to use the NEA’s endorsement of the Portland resolution to begin a similar effort in Seattle, working with other teachers, sympathetic school board members, and the King County Labor Council. Gundle said, “This is a first step in educating our students on the most important issue of our time.”