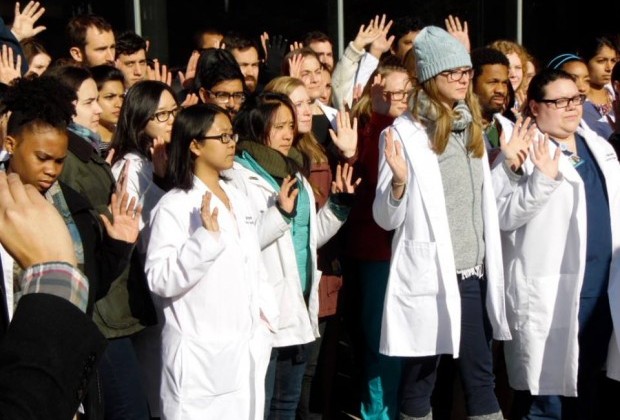 Today, medical students joined the nationwide uprising over the deaths of people of color at the hands of police and held die-ins at more than 70 medical schools from coast to coast. They expressed outrage over the epidemic of police killing unarmed black and brown people, calling it a public health emergency, and cited statistics showing racial disparities in health care and health outcomes. On Twitter, reports were tagged with #WhiteCoats4BlackLives.

I participated in the die-ins at both medical schools in Baltimore, Johns Hopkins where I did my residency in pediatrics and the University of Maryland where I attended medical school. Fortunately for me, they were held at different times as both were excellent and moving events.

At Johns Hopkins, more than 150 people, including nursing and public health students and residents, gathered outside the medical education building at noon. Speakers emphasized that they are taught that health occurs in a social context and so it is their responsibility to understand the racial injustice faced by the patients they treat. The die-in lasted four and a half minutes, to mark the four and a half hours that Mike Brown’s body was left in the street.

At the University of Maryland School of Medicine, during the die-in student organizer Chuma Obineme read the names of those who have been killed. Jessica Chaffkin, another student organizer, spoke about health disparities. The students are planning a forum in January to keep the conversation going.

On the organizing Facebook page, Obineme described the reasons for holding the die-in:

“Although the origins of the Die-In stem from the imagery of Michael Brown’s deceased body laying untouched for 4 hours after his death, the silent protest’s message has evolved into a much broader statement: That we as citizens of these United States come together in solidarity to recognize the systemic injustices which are so pervasive in our City and our Country. Our participation serves as our pledge, that we, as future healthcare providers, lawyers or professionals support the fight against health disparities and social justice for all.”

The medical student die-ins today are another sign that the long-building racial injustices in this country will no longer be tolerated. A national consensus that the system needs to change is growing. Ever since Mike Brown’s death in August, the people of Ferguson have been in the streets daily calling for justice. Following the grand jury announcement in Ferguson and then the Staten Island decision regarding Eric Garner’s murder, people have been protesting regularly across the nation.

I am so proud to see this generation of health professional students taking a stand on institutional racism and police violence. They are demonstrating the recognition that their job extends beyond the clinic door to addressing what happens in the community. Disease does not happen in isolation. It is greatly impacted by what are called social determinants such as education, housing, the environment, the food we eat and the water we drink, employment, stress levels and more. And these determinants are created by political and economic systems that have little regard for human life.

Health professionals are trained to work within the current system. Most do their best to provide care in a system that is first and foremost about creating profit for a few, and only secondarily about health. But the time has come for health professionals to break their silence and to stop being obedient in a broken system. Our calling to “first do no harm” means that we cannot be complicit with a racially prejudiced system.

All health professionals should do whatever they can to say “no more” to this system. Hopefully the conversations that follow today’s action will include an exploration of ways that health professionals can support each other in standing up for the needs of their patients and for justice in their communities.

The die-ins were initiated by the students at the University of California San Francisco and was endorsed and promoted by Students for a National Health Program, an arm of Physicians for a National Health Program, which advocates for a universal and publicly-financed healthcare system. These doctors-in-training are striving to change the healthcare system so that they can practice medicine with integrity.

Health professionals have an important role to play in ending injustice. During the civil rights movement, members of the Medical Committee for Human Rights marched with protesters and provided care when the police attacked. Health professionals are once again hearing the call to fight for rights.

I am inspired by today’s rising physicians and nurses. I am confident that they will break from this abusive healthcare system and create a future that supports health, the dignity of all human beings and which is based on the principle that #AllLivesMatter.