Above: Immigration protesters outside a Federal court calling for the abolishment of ICE and free movement of immigrants, June 29, 2018, in New York. By Mary Altaffer for AP.

Over the past weeks, there has been a series of major protests against the mistreatment of immigrants. Hundreds were arrested after blocking DC streets and sitting-in at a Senate office building.  Two weeks ago, there were #FamiliesTogether rallies across the United States that forced Trump to end child separation and return to the Obama-era policy of incarcerating immigrant families. People are taking action for immigrant rights and protesting the separation of children from their families as well as the indefinite detention of immigrant families.

Protesters are holding policymakers personally accountable. This includes protests against Homeland Security director, Kirstjen Nielsen, outside her home playing tapes of immigrant children as well as in a restaurant. The White House staffer, Stephen Miller, who is behind many of Trump’s most racist policies was also protested at a Mexican restaurant and outside his condo in Washington, DC. Popular Resistance believes in holding individuals accountable with carefully planned protests as an essential activist tool.

The occupation of Immigration and Customs Enforcement (ICE) field offices by mothers and children, holding that agency specifically responsible for abusive law enforcement practices, and the burgeoning #OcccupyICE protests, beginning in Portland, are putting pressure on ICE. Microsoft workers called for Microsoft to cancel contracts with ICE. And, people marched on tent city prison camps where children and immigrant families are being held. These build on efforts in court to hold ICE accountable.

Many cities have chosen to be sanctuary cities by refusing to use their law enforcement to do the work of ICE. Cities that welcome immigrants and have non-discrimination policies have fewer deportations and less insecurity. This is also having the result of making those cities safer in general because immigrants have less fear of reporting crimes.

While sanctuary and humane treatment of immigrants bring security, raids on immigrants leave misery and broken communities. Here is one account of the terror and hardship caused by an ICE raid on a business last month in Ohio. And the issue of racist and violent policing is still a problem because some cities make a distinction between protecting “law-abiding” immigrants versus those who break a law, as determined by racist police.

There are divisions over immigration within the enforcement community. In March, an ICE spokesperson resigned rather than continue to put out false information about immigrants. This week, top leaders of Homeland Security enforcement wrote a letter that was made public claiming ICE is making their job of protecting the country from real threats more difficult. Calls for abolition of ICE are now being made by activists and the list of Democrats calling for the abolition of ICE is rapidly growing. 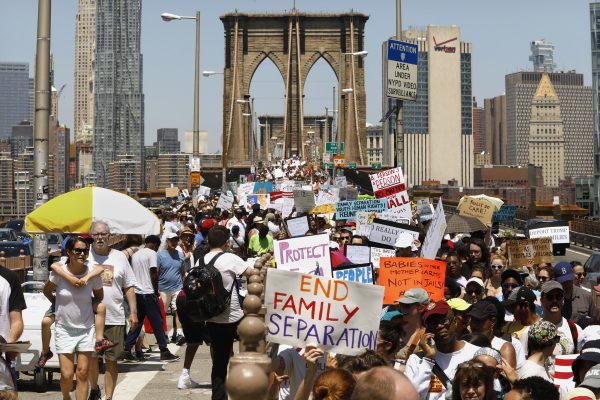 Thousands march across the Brooklyn Bridge on June 30, 2018 by Carolyn Cole for the Los Angeles Times.

Are The Protests Pro-Immigrant or Anti-Trump?

The protests remind us of the immense anti-war protests during the George W. Bush presidency, which turned out in hindsight to be more anti-Bush than anti-war as they dissipated when President Obama was elected. The Bush wars continued under Obama, as did coups and other efforts to reverse the pink tide in Latin America. President Obama expanded militarism using robotic-drone warfare, new military troops and bases throughout Africa and mass destruction and slaughter in Libya, yet there were no mass anti-war protests against him as were seen in the Bush era.

Democratic Party-aligned groups used the anti-war sentiment to stir up their voter base in opposition to President Bush and the Republicans, but were noticeably silent during the Obama administration in order to protect the Democrats. Is immigration being used similarly as an issue to elect Democrats? It appears to be the case.

Democratic Party-aligned groups like MoveOn and the Women’s March have led some of the organizing efforts. MoveOn reported on the mass protests yesterday, writing in an email:

In Washington, D.C., today, 35,000 demonstrators braved 96-degree temperatures to march on the White House and send a crystal-clear message: Families Belong Together. There were 30,000 participants in New York, 60,000 in Chicago, more than 70,000 in Los Angeles, and huge turnouts from Orlando, Florida, to Austin, Texas, to Boise, Idaho. We were everywhere.

Here’s the eye-popping map of all the protests, one dot per demonstration, spanning all 50 states, as hundreds of thousands of us gathered in cities from Antler, North Dakota, to Lake Worth, Florida:

More than 750 cities. One message. This is what it looks like when a nation speaks with one voice.

While abuse of immigrant families and their children are important reasons to protest, it is critical to be non-partisan or the pro-immigrant movement risks going the way of the anti-war movement, which is still struggling to rebuild. If the protests are framed as anti-Trump, then voters may conclude that electing Democrats will solve the problem. Both major political parties have failed immigrants in the US. We need to build national consensus for pro-immigrant policies that hold whomever is in power accountable. 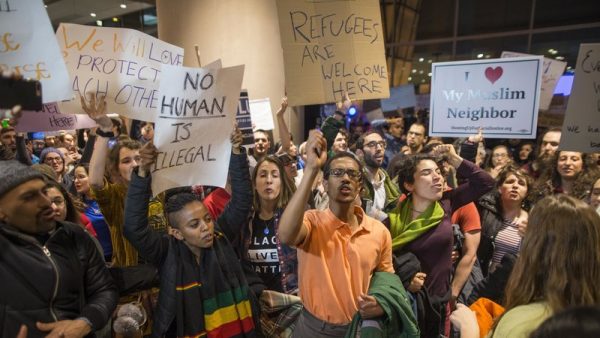 Facing the Roots of Abusive Immigration Policies: Racism and Profit

The connection between immigration policies and racism and profit-seeking is being exposed. Stirring up racist hatred against immigrants benefits the ruling elites by keeping people focused on fighting each other while the rich get richer. The federal government has spent $4 billion since the start of 2017 fiscal year on contracts and grants for private prisons, security firms, the tech industry and child “protective” agencies and non-profits, as well as the budgets of federal agencies including Homeland Security, ICE and the US military, which is building prison camps for 120,000 immigrants. Abusing immigrants means high profits for some and plays on the divide-and-rule racism politicians use to control people.

The broader context is that today’s immigration policies of separating and mistreating families have deep roots. The colonizing founding of the United States treated imported African slaves in brutal ways, including family separation. There has been a similar mistreatment of Indigenous peoples, separating families and putting children into brainwashing, abusive boarding schools. And, racist-based mass incarceration results in fathers and mothers being removed from their families and communities, particularly for black and brown people.

The duopoly parties ignore the root causes of mass migration, which are due in large part to US economic policies including the injustice of corporate trade agreements on behalf of transnational corporations that abuse people and steal resources throughout the world, as well as US empire policies of militarism, regime change, and imperialism. We wrote two weeks ago about how to protect the human rights of immigrants, the US must end the policies that drive migration. 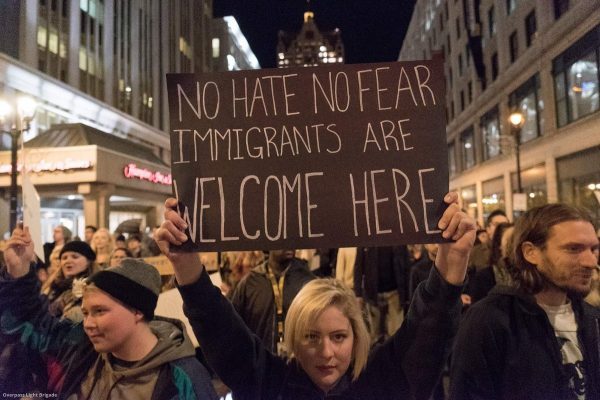 The beginnings of a pro-immigration policy in the United States is developing. Indeed, that word “pro-immigration” needs to become part of the political dialogue. We heard the call for a pro-immigrant policy at the Maryland State Green Party meeting this weekend. It was a phrase we had not heard in the political dialogue, but we are pleased to see it brought out into the open. Unlike the corporate duopoly, the Green Party of the United States has an excellent platform on immigration.

A critical area of information that has been suppressed is the positive impact of immigration on the economy. Research shows that the presence of immigrant workers has a small positive impact for US-born workers. Immigrants tend to work in different sectors or hold different jobs within the same sector than US-born workers. They also make significant contributions through taxes. Mapping shows how immigration has helped build the economy across the United States.

The US needs to recognize the positive impacts of policies that protect the human rights of people to move across borders. Research published this week shows that free movement of people could expand the global economy by $78 trillion.

It is time to end the failed policies of abusive immigration policy, militarized law enforcement and a militarized border and build a positive approach to immigration that protects human rights and builds the economy from the foundation up by using the best of each person who comes to the United States or who already live here.

If the $4 billion spent on abusive immigration enforcement in the last year had been used to build the foundation of the US economy with a positive approach to immigration, we would all be better off. A positive immigration policy will increase security and build the economy for all people.