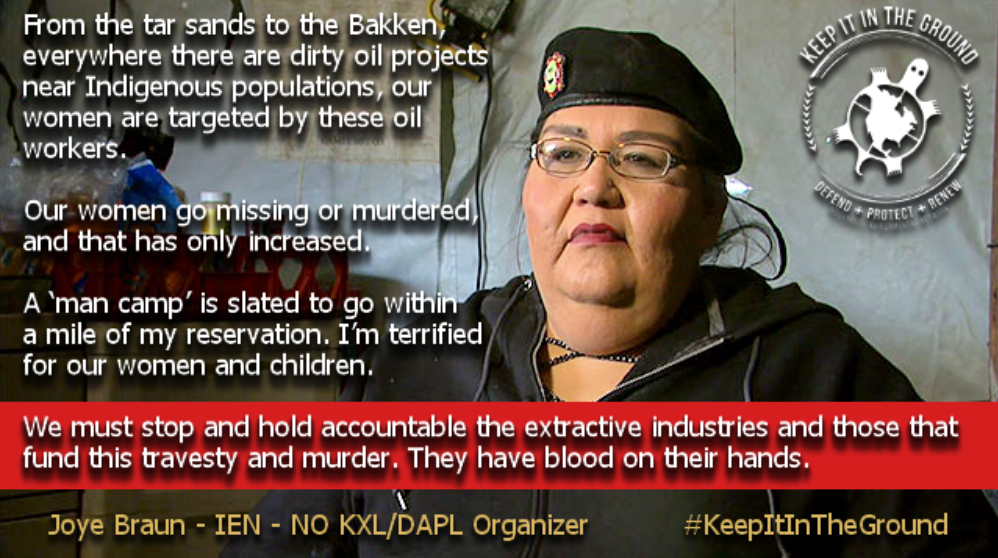 Lower Brule, SD — Yesterday, May 4th, Indigenous leaders and allies began convening at the Rosebud Sioux Nation, just miles from the proposed Keystone XL pipeline route, to call attention to the disproportionately high numbers of missing and murdered Indigenous women and girls across North America. The gathering calls attention to the connection between pipeline construction and violence against Native women and girls.

Construction of pipelines and other fossil fuel projects often brings an influx of male workers to rural areas near small towns and Reservations, where they live in “man camps” disconnected from the surrounding community. In North Dakota, a surge in rates of violent crime and aggravated assault have correlated with the Bakken “oil boom” and the subsequent arrival of thousands of new workers to the region. The state had at least 125 cases of missing Native women, though numbers are likely much higher because data is not officially collected. A study from the Lake Babine and Nak’azdli nations, in BC, Canada, found that such camps are associated with increased rates of sexual assault and violence against Indigenous women.

Indigenous women are murdered at staggering rates, according to recent reports. While Native women made up less than 5% of the total female population in Canada in 2015, they comprised one quarter of all murdered women in the country that same year, according to a  study by Statistics Canada. In the U.S., the CDC reports that homicide was the third leading cause of death for Native women and girls age 10-24 in 2014. Yet few government resources have supported efforts to combat this gruesome reality. Meanwhile, fossil fuel companies continue to expand while their profits pile-up.

If Keystone XL is constructed, three man camps would be built near treaty and unceded territory of the Yankton Sioux, Rosebud Sioux and Cheyenne River Sioux tribes.

Faith Spotted Eagle, member of the Yankton Sioux Nation and Brave Heart Society: “Man camps and fossil fuel development is a direct attack on the water and physical safety of our daughters and women. It also targets reproductive rights as Missouri River water is already polluted and affecting the unborn. It is important for all to be brave enough to stand against this as the rate of violence on ALL WOMEN is on the increase and the potential for that is legitimized by eminent domain takings of land in our frontline communities. It is legalized violence. “

Joye Braun, leader of the Wakpa Waste Camp at the Cheyenne River Sioux Reservation in South Dakota: “From the tar sands to the Bakken, everywhere there are dirty oil projects near Indigenous populations, our women are targeted by these oil workers. Our women go missing or murdered, and that has only increased. A ‘man camp’ is slated to go within a mile of my reservation. I’m terrified for our women and children. We must stop and hold accountable the extractive industries and those that fund this travesty and murder. They have blood on their hands.”

May Boeve, 350.org Executive Director: “We cannot ignore the connection of oil extraction and pipeline construction to growing numbers of missing and murdered Indigenous women and girls. It’s another grisly example of Big Oil’s horrifying human rights record. We must stand in solidarity with Native women defending their sovereignty and their safety from the fossil fuel industry’s extractive and violent practices.”