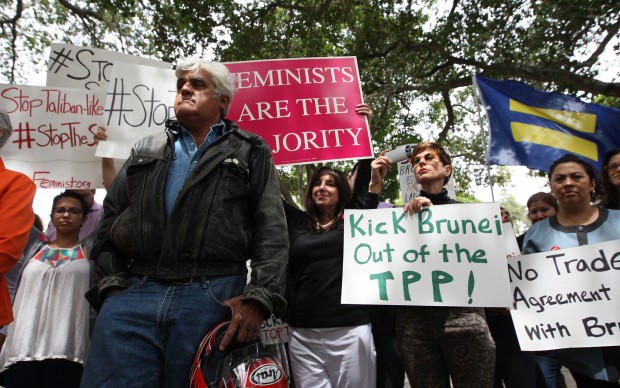 **Staff note: We are posting this article to bring attention to discrimination in Brunei. Whether or not the TPP is negotiated with Brunei, we do not support the TPP for many reasons including that it will lower worker rights around the world and allow further environmental destruction. We also recognize that many human rights abuses occur in the US through mistreatment of immigrants, mass incarceration, police violence, racism, forced austerity, lack of access to health care, destruction of public education, evictions and more, not to mention what our foreign policy does to people in other countries.**

“Brunei’s new laws are an affront to human rights and basic decency,” said Jerame Davis, interim Executive Director of Pride at Work. “The United States, and every other nation considering doing business with Brunei, should immediately cease any negotiations or consideration for that country as a trading partner. Human rights abusers don’t get preferential treatment.”

Pride at Work, the Human Rights Campaign, the National Gay & Lesbian Task Force, and the National Center for Transgender Equality delivered this letter to the White House demanding that the U.S. either insist that Brunei revokes this new penal code or be removed from the TPP altogether.

“The Administration has made great strides toward LGBT equality and strengthening the human rights stance of the U.S. It would be a profound backwards step in that progress if we were to ignore the egregious abuses represented by Brunei’s new laws by giving them preferential trade status,” continued Davis.

The Trans-Pacific Partnership is a proposed “free trade” agreement between the U.S. and 11 other nations bordering the Pacific Ocean, including Brunei. It is poised to be the largest trade agreement in history and could account for nearly 40% of global economic activity, but has been negotiated mostly under a veil of secrecy.

The new laws in Brunei, which went into effect on May 1, will be phased in over time. When the third and final phase is implemented, gay men and lesbians, as well as those convicted of adultery, will be stoned to death for their supposed “crimes”. The Office of the United Nations High Commissioner on Human Rights has condemned the new laws as well, pointing out they are a violation of international law.