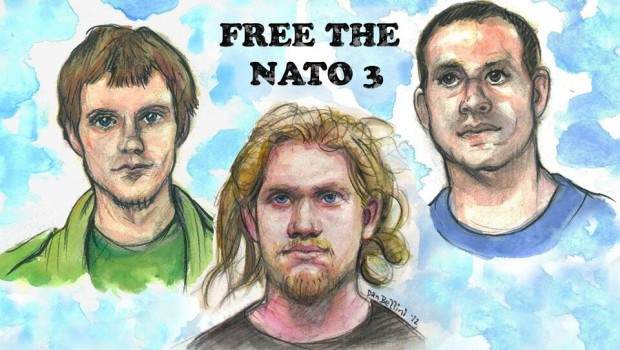 It is a relief that a Chicago jury did not convict these three young men, Brent Betterly, 25, Jared Chase, 29, and Brian Church, 22, of terrorism charges. They were encouraged by undercover police to take actions they almost surely would not have taken without the police. It is disappointing they still face up to 30 years in prison for the arson-related charges of which they were convicted. They will be sentenced on February 28th.

Undercover police targeted three youth whose visit to Chicago for the NATO protests would have been uneventful but for the police. This shows a great danger for people involved in protest. Police did not target organizers or leaders as they used to do to discredit a movement.  More experienced people would have very likely rebuffed the police incitement to violence. The police instead focused on three inexperienced youth who seemed from the testimony to be trying to impress the undercover police and display childish machismo.

We hope people involved in the social justice movement will learn from the mistakes of the NATO 3 as well as learn the tactics of undercover police from how the Chicago police behaved.  Unfortunately, we fear that police will always be able to find someone they can trick into make poor decisions with serious consequences.

We find found these comments from an ACLU PrivacySOS Blog to be of insightful, below that blog is a more detailed report with videos from DNAInfo Chicago.

NATO 3 cleared of all terror charges

Today jurors in Chicago acquitted Brent Betterly, 25, Jared Chase, 29, and Brian Church, 22 of the terrorism charges levied against them by the State of Illinois. The jury found the NATO 3 guilty of lesser charges, including two counts of mob action. The three have already served two years in prison awaiting trial.

Some quick thoughts about this verdict, and its implications:

1. The verdict is a major hit to the dangerous implication, insinuated at all levels of law enforcement for decades in the United States, that dissent and terrorism are interchangeable. The conflation of dissent with terror has a long and ugly history in the United States, and so it’s refreshing and encouraging to see a jury reject it outright.

2. The three young defendants have a pretty good case to make in a civil suit that the terror charges (which were so tenuous and thin that even the notoriously terror-eager FBI declined to get involved) were seized upon to provide political cover for the City of Chicago’s enormous effort to spy on and track the activities of law abiding anti-NATO activists, who descended on the city in the spring of 2012. Previous juries have agreed with claimants who argued that when the government smears activists as terrorists, they are doing it in in order to justify expansive political spying, putting everyone’s First Amendment rights in the crosshairs. (See the case of Judi Bari v. FBI for a great example.)

3. The jury’s verdict today constitutes yet another bucket of cold ice thrown on the hot garbage heaps that are the “largely symbolic” state terrorism laws passed in the aftermath of 9/11. At least 36 states passed these statutes, but the NATO 3 case marked the first time Illinois prosecutors ever used theirs to go after anyone. Very few of these prosecutions have succeeded, nationwide. As of October 2012, of the nine people arrested under Tennessee’s state terror law, all but one “had their charges dismissed or were convicted on lesser charges.”

4. The NATO 3 trial uncovered the disturbing degree to which Chicago police subject political dissidents to invasive monitoring, disruption, and counterintelligence programs. Everyone likes to think the bad days of COINTELPRO are over, but the courtroom testimony of undercover detectives assigned to infiltrate the left in advance of the NATO summit shows J. Edgar Hoover’s spirit lives on in law enforcement. See Kevin Gosztola’s reporting for details on the extent of the CPD’s undercover operations.

5. Finally, while it’s extremely encouraging to see a jury of their peers reject this aggressive terror prosecution, I’m left wondering if the jury would have reached the same verdict had the young defendants possessed more melanin, or Muslim-sounding names. This country is thirteen years into its seemingly never ending terror wars, and while the public is increasingly reticent to accept mass surveillance in exchange for false promises of security, the Islamophobia and racism that lie at the heart of the post-9/11 civil liberties assaults are as strong as ever before. I’d like to think that, given the same facts but defendants with darker skin, the jury would have reached the same conclusion. But I am not so sure.

Defense attorneys label case a “political prosecution in every sense of the word.”

COOK COUNTY CRIMINAL COURTHOUSE — The three men known as the NATO 3 were convicted of mob action and possession of incendiary devices Friday — but were found not guilty of the terrorism charges leveled against them.

Smiles crept across the faces of NATO 3 supporters after the long list of verdicts was read at the Cook County Criminal Courthouse just after 4 p.m. Friday. When the crowd of supporters realized the NATO protesters were not guilty of terrorism charges, the supporters exchanged hugs and wept.

There was no immediate emotion from the defendants — Brian Church, Jared Chase and Brent Betterly — who are now scheduled to be sentenced on the lesser charges Feb. 28. The men have been in custody since their May, 2012 arrests.

Their lawyers said those charges could bring anywhere from 4 to 30 years in prison. The mob action charge could bring just 30 days.

The lawyers said the rejection of the terrorism charges showed those charges amounted to an over-reach by prosecutors in a “political prosecution in every sense of the word.”

“There is a line in the sand, and this jury drew that line,” defense attorney Molly Armour said. “This war on terror cannot go this far.”

Thomas Durkin, Chase’s attorney, called it a victory, despite the conviction on the lesser charges.

“They’re disappointed because they didn’t want to get convicted of anything, but this is a tremendous victory. This is a huge, huge victory,” he said.

The three men came to Chicago to protest the NATO summit in May 2012, an event that drew world leaders and scores of protesters. Their arrests, in the days before the summit kicked off, brought the most serious charges leveled against any of those arrested as part of the NATO protests.

Jurors began deliberating Thursday night after almost two weeks of testimony. They resumed Friday, and deliberated for a total time of seven hours and 46 minutes before Judge Thaddeus Wilson announced a verdict had been reached.

Prosecutors alleged that the three came from Florida with plans to do more than protest peacefully while dignitaries and notables from around the world gathered at McCormick Place. Their plans allegedly included attacking President Barack Obama’s re-election campaign headquarters in the Prudential Building near Millennium Park, Mayor Rahm Emanuel’s Ravenswood home and other targets.

Undercover police officers infiltrated the Bridgeport apartment where the three were staying. Their observations of the group, provided in testimony during the trial, described how they discussed firebombing Obama’s headquarters and making Molotov cocktails.

The state’s case hinged on secretly recorded conversations captured by the officers in the days leading up to the 2012 NATO summit in Chicago.

“Are you ready to see a police officer on fire?” Church asked, according to one recordingmade while his group is accused of putting the finishing touches on four Molotov cocktails.

But defense attorneys argued  the three were little more than a band of misguided “goofs.” They used the prosecution’s recorded conversations to argue that the NATO 3 were all talk and no action.

The defense contended that Church, Chase and Betterly never would have gone as far as they did in their plans to disrupt NATO if not for the two undercover police officers egging them on.

“Cops get lit on fire all the … time that’s his attitude about the police,” Assistant State’s Attorney Thomas Biesty said, arguing Thursday that the statements made by the NATO 3 cannot be explained by “drunken bravado.”

In closing statements Thursday, prosecutors pointed to portions of recorded conversations when the defendants talked about starting riots, attacking police stations, doing “recon” on Obama’s campaign headquarters, blowing the windows out of a bank and making firebombs, acid bomb, Napalm.

“In a way, it also disrespects real victims of terrorism,” he said.

He said the Chicago Police Department and the two undercover officers who spent months “trying to find anarchists” needed to make the NATO 3 out to be terrorists.

“These undercover agents had invested a lot of time and a lot of energy in these guys,” Deutsch said. “They said we are going to latch our wagon to these guys… But nothing happened. They got drunk and went to a party.”

Brian Church, he said, is a misguided misfit who is probably guilty of mob action, or some lesser crimes, but certainly would not qualify as a terrorist.

“He was a wayward confused young man who wanted to appear macho and wanted somehow to impress these undercover agents,” he said.