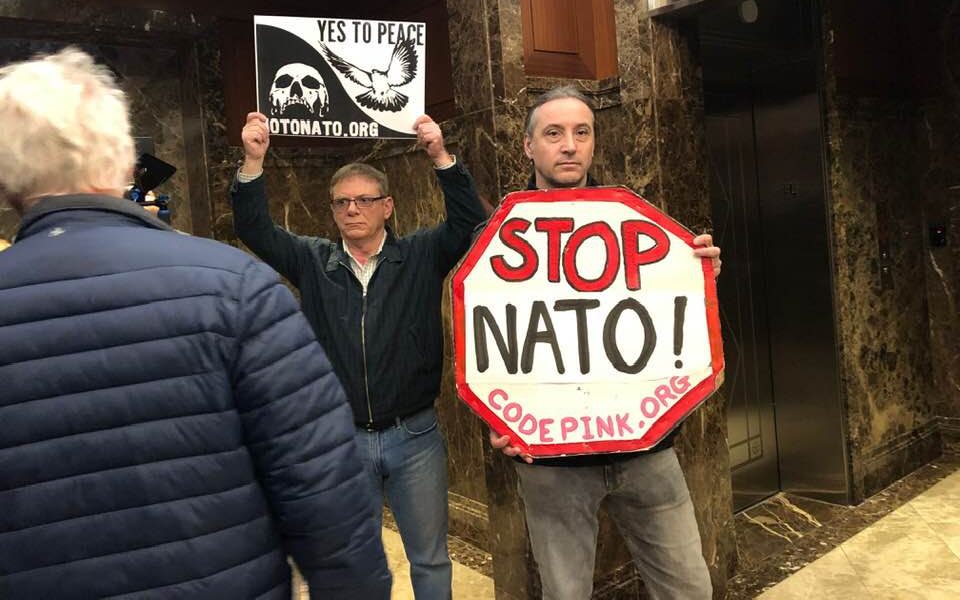 Above photo: Protesters inside the building where the CEPA meeting was held. Ann Wright.

Washington, DC (April 5, 2019) – Wednesday morning an event was held in a building overlooking Freedom Plaza in Washington, D.C., at an organization called the Center for European Policy Analysis, which is funded by: FireEye, Lockheed Martin, Raytheon, Bell Helicopters, BAE systems, the U.S. State Department, the Pentagon, National Endowment for Democracy, the U.S. Mission to NATO, and NATO’s own Public Diplomacy Division.

Participating in the event were several foreign ministers from NATO nations, ambassadors to NATO, and U.S. Senator Chris Murphy. NATO is designed to vigilantly protect you from numerous imaginary and NATO-provoked dangers, but its events are apparently protected by magic spells, as I just walked in and took a seat.

When I couldn’t take any more of the pro-militarism talk, I stood up and interrupted, holding up a sign reading: “Yes to Peace / NoToNATO.org.” Lots of media cameras were in the room, so there is bound to be video somewhere. (Please share it with me.) I said words to this general effect:

NATO needs to be shut down, not enlarged. Russia spends a tiny percentage of what NATO nations do on war, and you pretend to be afraid of Russia. We’re not buying it. You’re provoking dangers. NATO makes up 3/4 of military spending in the world. Its members are also responsible for about 3/4 of foreign weapons dealing — to dictatorships and so-called democracies around the world. NATO wages aggressive wars far from the North Atlantic. The people you can hear chanting outside have had enough. We’re not believing these myths anymore.

I continued along those lines for a little while before leaving. We sang songs and spoke to people in the building’s lobby and on the sidewalk out front, and did interviews with media from every continent other than North America, before heading off to Capitol Hill where the head of NATO was being welcomed in bipartisan harmony.

NATO is encountering protest everywhere it goes in Washington on Wednesday and will on Thursday as well. Detailed plans are at http://notonato.org