Above photo: A German Brown Trout caught in Spangerbach Creek downstream of Spangdahlem NATO Airbase was found to contain a staggering 82,000 ppt of PFOS.

PFAS in firefighting foams is to blame.

Throughout much of Europe, NATO military bases have used and carelessly discarded hundreds of thousands of gallons of toxic fire-fighting foams containing a variety of PFAS chemicals during routine fire-fighting exercises. The aqueous film-forming foams (AFFF) have been in use since the early 1970’s and have been allowed to seep into the ground to contaminate groundwater, soil, and surface water.  The resulting pollution is responsible for a serious European public health crisis, although few are paying attention.

​A German Brown Trout caught in Spanger Bach Creek, near Spangdahlem NATO Airbase, was found to contain 82 ug/kg (micrograms per kilo of fillet) of per – and poly fluoroalkyl substances, or PFOS. That news was published in 2015 and it barely attracted attention. 82 ug/kg is the same as 82,000 parts per trillion, (ppt). Public health scientists around the world have been warning people not to consume >more than 1 ppt of the toxins daily. 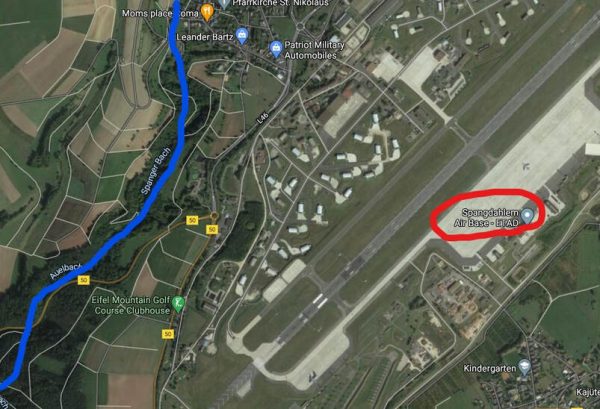 Spanger Bach, on the west side of the runway, drains contaminants from Spangdahlem NATO Air Base.

Germany has no maximum contaminant levels for PFOS in food. However, in December, 2018, the European Food Safety Authority (EFSA) recommended limiting the weekly consumption of PFOS to 0.013 micrograms of PFOS per kilogram of body weight. This means an adult weighing 60 kg (132 pounds) may ingest 0.78 micrograms of PFOS per week. If an individual consumed a relatively small .25 kg portion of the fish from the Kyll River caught below the Spangdahlem NATO Base which contained 200 ug/kg – she would be 64 times above the EFSA recommendation for the week.

The European Commission has proposed a drinking water standard of 100 parts per trillion (ppt) for 20 PFAS compounds. By comparison, the US Environmental Protection Agency (EPA) has only issued a voluntary, unenforceable health advisory of 70 ppt for two individual PFAS – perfluorooctanoic acid (PFOA) and perfluorooctanesulfonic acid (PFOS).  In the absence of US governmental regulation, several U.S. states have implemented drinking water standards under 20 ppt for the chemical.

To be clear, scientists with Harvard University’s School of Public Health say we ought to limit our consumption of PFAS chemicals to 1 part per trillion per day, while the Europeans are moving toward imposing a mandatory limit of 100 ppt in drinking water. At the same time, fish caught near a NATO base with 82,000 ppt of the toxins may be consumed.

PFOS and PFOA, once used in NATO’s firefighting foams, are two of the deadliest varieties of PFAS chemicals, (per- and poly fluoroalkyl substances).  Exposure to the two chemicals has been linked to kidney and testicular cancer and severe thyroid problems, as well as decreased fertility and adverse fetal development.  They are associated with elevated cholesterol and obesity in adults and decreased immune response in children.  The toxins are associated with childhood autism and attention deficit/hyperactivity disorder which are becoming more prevalent in German children.

Of the two, PFOS tends to inflict more harm on human health. PFOA and PFOS never break down, but PFOS is extraordinarily bio accumulative in fish. PFOS levels in fish may be a thousand times higher than levels in streams and rivers, especially those downstream of NATO bases.

The devastating health effects of PFAS 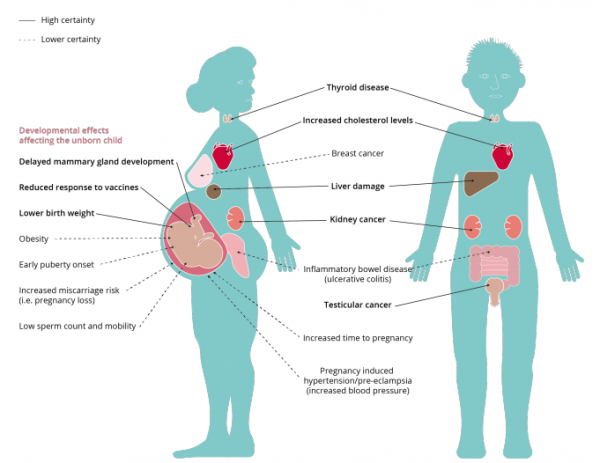 Virtually all Germans now carry the toxins in their blood and all German babies are born with the chemicals in their bodies.
A study of 1,109 German children  found that they all had PFOS toxins in their blood. The European Food Safety Authority (EFSA) estimates that  “fish and other seafood” account for up to 86% of dietary PFAS exposure in adults.”

The Kailbach River and the Salm River flow on the east side of NATO’s Spangdahlem Airbase
They are loaded with PFOS and so are the fish. Part of the runway at is shown at the top left.

The Kailbach River flows just 500 meters east of the runway at Spangdahlem Airbase. It empties into the Salm River less the 5 kilometers from the NATO base. A brown trout caught there contained 41,000 ppt of PFOS while people are free to eat the fish they catch.

The Nims River is shown west of the runway at the former Bitburg NATO Airbase. The Kyll River is shown to the east. Fish are contaminated with PFOS in both rivers.

From 1952 until 1994, Bitburg Air Base was a front-line NATO air base. The toxic foams were used in routine training exercises for more than 20 years.  The deadly chemicals travel in small streams and underground aquifers, often emptying into rivers or the sea.  A trout from the Nims below Wolsfeld, (bottom left of the map) had 4,500 ppt of PFOS in its filet.  Much higher levels of the chemicals may be expected in muscle tissue.

PFAS are often referred to as “forever chemicals” because they don’t go away. Although Bitburg closed 26 years ago the pollution continues to flow from the base and all living creatures are vulnerable.

Alfred Grunenberg, a spokesperson from the Structure and Approval Directorate (SGD) North, part of the state government of Rhineland-Palatinate, told Volksfreund in 2015 he wasn’t certain whether the pollution in the Nims originates from the old NATO base. He explained, “Because for this you would have to test fish from much more northern river sections for comparison. “The Nims is too narrow there, however, and the fish do not have the minimum size required for the investigation,” said Grunenberg.

“The fish are only slightly contaminated and in terms of consumption, harmless,” said the spokesman. Locals say they will continue to eat the fish.

In defense of the official, the world has learned a tremendous amount about the destructive powers of this class of chemicals since this rare story aired five years ago. Today, we have a better understanding of the bio accumulative nature of PFOS in fish and humans, although Germans are still consuming massive quantities of the toxins.

The EU Water Framework Directive (EU, 2013) has set an Environmental Quality Standard  limit  of .65 parts per trillion for PFOS in inland surface waters.

It’s laughable. The rivers and streams near NATO bases are often thousands of times over these limits.  PFOS was found in the Kyll River 5 kilometers away from Bitburg at 3,400 parts per trillion. That’s 5,230 times over the Water Framework Directive.

Apparently, scientists with the goal of protecting public health, set the .65 ppt limit, while German authorities had no intention of enforcing them.

In 2012, fish from the Kyll were found to have 200,000 parts per trillion of PFOS, while the water contained 3,400 ppt of the toxins.  This would represent a multiplicative factor of 58.8, a relatively small margin. Fish are like sponges in the water that soak up PFOS. PFOS can accumulate in fish thousands of times more than the levels present in water—even if the water levels for PFOS aren’t that high. Surface water quality standards don’t necessarily protect fish consumers.

A 2016 study by the US Air Force Civil Engineer Center that assessed toxic levels at ten military bases found that the median PFOS levels in surface waters were 2,170 ppt., so the 3,400 ppt level for the Kyle is in the ballpark.

An Air Force base in Louisiana found PFOS levels in surface water downstream of fire training areas at 1,800 ppt and a sunfish at this site had 9,349,000 ppt PFOS in its tissue. These numbers represent a  multiplicative factor of 5,193. At Wurtsmith Air Force Base in Michigan, a fish was found with 9,580,000 ppt of PFOS.

Meanwhile, the U.S. military’s propaganda machine is directing all public attention regarding the PFAS contamination it has caused on bases around the world toward the quality of drinking water, a problem that can be solved by installing carbon filter systems. It’s about the fish. 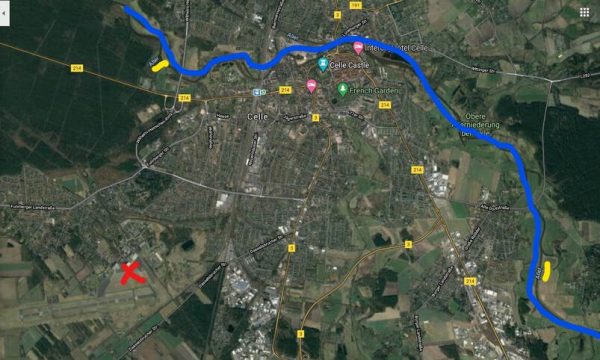 The Aller River drains the area around NATO’s Bergen-Hohne Training Area near Celle, Germany, about 40 kilometers north of Hanover.

Bergen-Hohne Training Area is a NATO military training area in the southern part of the Lüneburg Heath, in the state of Lower Saxony in northern Germany. It covers an area of 284 square kilometers (70,000 acres), which makes it the largest military training area in Germany. The place is an environmental catastrophe and PFOS releases into neighboring rivers is a big part of the disaster.

See the routine live exercises here. Live fire exercises are often accompanied by fire-fighting drills that use the deadly foam. Accidents and crashes, which are routine occurrences on training facilities like Bergen-Hohne, often involve fiery mushroom clouds that are extinguished with foams laced with the deadly chemicals that eventually make their way into our bodies.

It is the most reprehensible human behavior. Every bullet fired is an environmental disaster.

​In December 2019, fish from the rivers Aller, Elbe, Ems, and Weser in the region were examined for PFOS levels. Bream, eel, and pikeperch were analyzed. The Institute for Fish and Fishery products (IFF) of the Lower Saxony State carried out the testing.  All fish from the four rivers were found to contain PFOS.

The median of the PFOS concentrations in the muscle tissue of the fish was 7,800 parts per trillion.  The maximum value was in an eel sample from  the Ems River with a PFOS content of 128,500 ppt.

Poisoned waters near other NATO bases – (The fish are poisoned too.)

NATO’s Ramstein Airbase:  The concentration of PFAS in the Glan River, below the confluence of the Mohrbach River, 11 kilometers from the NATO base at Ramstein, was 538 times the level the EU says is safe.

NATO’s Sembach Kaserne Air Base is a United States Army installation in Sembach, Germany, near Kaiserslautern. During the Cold War (1950–1993), Sembach Air Base served as a front-line NATO air base.  Surface waters next to the airport were contaminated with 1,200 ppt of PFAS.

Former NATO Base Bitburg – In Bitburg, groundwater contained 108,000 ppt of PFAS chemicals and the surface waters next to the airport had 19,100 ppt of PFAS. Bitburg is contaminating local waterways with these toxins, much more so than in Spangdahlem or Ramstein.  Concentrations of PFAS up to 5,000 ppt were found in the Paffenbach, Thalsgraben and Brückengraben streams, popular fishing grounds.

NATO’s Hahn Air Base was a frontline NATO facility in Germany for over 40 years during the Cold War. The Brühlbach River near Hahn had a maximum value of  9,300 ppt for PFAS. The amounts are astonishingly high because the watershed of Wackenbach Creek begins about 100 m of the former fire training pit. A little bit of  math is in order. For surface waters, the E.U. says PFAS levels should not exceed 0.00065 ug/L.  9,300 ppt is 14,000 times higher than the EU’s surface water limit of .65 ppt.

NATO’s Spangdahlem Airfield sewer treatment plant was found to have  PFAS at 31,400 ppt.  The locals have discovered they cannot spread the chemical-laden sewer sludge on farm fields, and they cannot incinerate the materials without threatening human health. They also cannot sue the US military.

NATO’s Büchel Airfield – Under a NATO nuclear sharing arrangement, twenty B61 nuclear bombs are ready to be launched from Buchel. PFAS fire-fighting foams are present wherever nuclear forces are stationed.  In 2015 investigations on PFAS were carried out at the Büchel Airbase. Water samples were taken from the rainwater retention basins and the surrounding waters. PFOS was found at 3,200 ppt.

Zweibrücken NATO Air Base closed in 1991.  Surface waters next to the airport were found to have a maximum of 8,100 ppt for PFAS. Most alarmingly, PFAS was found in neighboring drinking water self-supply systems at a maximum 6,900 ppt.

The German public is largely unaware of the threat posed by the massive use of PFAS chemicals on NATO bases – and, in particular, the reckless disposal of PFOS, one of the deadliest chemicals ever developed. Meanwhile, the German government is in no mood to tangle with the US over the environmental calamity associated with the continued American presence on German soil. Officials in Ansbach appear to be bucking that trend. It’s a story worth following.