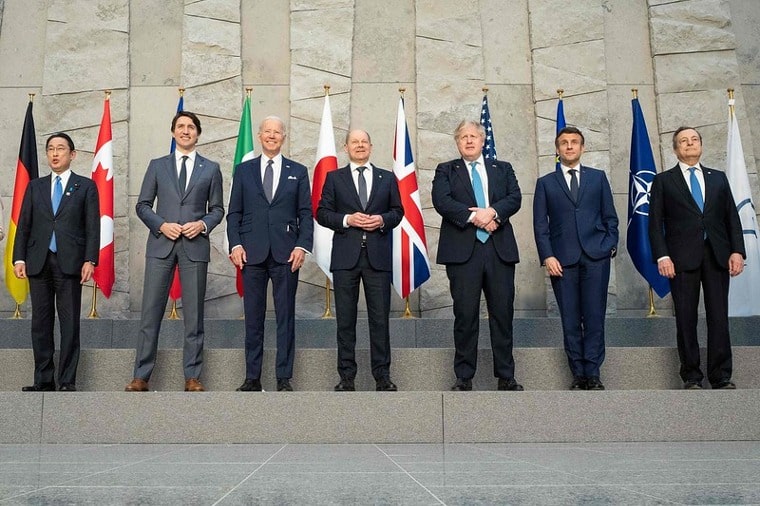 NATO Sets Out Its Strategy For Even More Military Build-Up

Above Photo: G7 leaders at a Nato summit in Brussels, Belgium. Michael Kappeler.

The annual report from the NATO military alliance sets out a deadly agenda of escalated militarization to target Russia and China.

NATO sees Russia as a threat to US power—and has poured arms and soldiers into eastern Europe accordingly. That’s not the latest statement from the Stop the War Coalition—but the picture NATO paints itself in its annual report released on Thursday.

The report gives an outline of what the US’s military alliance got up to in 2021 and spells out its aims for the years ahead. It all comes packaged in the ­language of “cooperation” and “security.” But once you strip out the guff, what the report really says is NATO’s biggest concern is containing Russia and China.

In his foreword to the report, NATO secretary general Jens Stoltenberg writes, “We have entered a new era in global security, where authoritarian powers, like Russia and China, are openly contesting core principles for our security, and seeking to re-write the entire international order on which our peace and prosperity depend.”

That “international order” is one in which markets are dominated by US business. The “core principles of our security” are the military alliances built to protect that.

Stoltenberg, like US president Joe Biden, is worried that Russia and China could threaten it—and even overturn it. The rest of the report aims at ­reassuring Western journalists and politicians that NATO has those threats under control—parading its ­militarism for all the world to see.

So it barely mentions NATO’s defeat in Afghanistan last year, except to dress up the two-decade war as some sort of success. But it spends much more time describing NATO’s plans to fill eastern Europe with soldiers and weapons.

Presenting the report on Thursday, Stoltenberg told the assembled press proudly, “Over the years, allies have trained tens of thousands of Ukrainian troops, provided modern equipment. The Ukrainian forces are now bigger, better-equipped, better-trained, and better-led than ever before.”

And the report itself boasts of how eastern Europe is bristling with NATO soldiers ready for war. “In the Baltic Sea region, the Alliance continued to deploy four battalion-size multinational and combat-ready battlegroups led by the United Kingdom in Estonia by Canada in Latvia, by Germany in Lithuania, and by the United States in Poland,” it says. The battlegroups together make up “thousands of troops from ­multiple NATO allies.”

And that was before NATO “more than doubled our military presence” in eastern Europe in recent weeks “with more troops, aircraft and ships.” The report also highlights its ­“flagship” exercise of 2021, “Steadfast Defender”—where 9,000 soldiers from 20 countries practiced a war in Romania, Bulgaria, Hungary and Portugal. We learn Ukraine’s ­“cooperation” with NATO included sending soldiers to “advise” and “assist” the Afghan army.

But we’re also told of how NATO helped “strengthen” Georgia’s ­military—with a view eventually allowing it to join—and of its close cooperation with non-members Finland and Sweden.

The impression we’re supposed to take from all of this is one of a strong, unified NATO ready to defend the West’s dominance. But in doing so, we get an insight into the militarization of Europe that fueled the war.

Don’t Forget We Have Nuclear Weapons, China Warns The US

China also sees war in Ukraine through the prism of a bigger confrontation between itself and the US. A recent article in the Global Times newspaper—owned by the ruling Chinese Communist Party—on China’s relationship with Russia, gives some insight into its rulers’ thinking. Its author, Hu Xijin, is the paper’s former editor in chief and is often seen as a mouthpiece for the Chinese government. He says “the Chinese people”—for him, synonymous with the Chinese state—thinks the US’s long term goal is to isolate China from Russia.

“Who is the No.1 strategic adversary viewed by the US today?” asks Hu. “The answer is China, not Russia.” Nevertheless, “As an irreplaceable partner, Russia is strategically important to China.”

Russia has supported China against the US in disputes in the South China Sea. It also gives China access to energy, food and raw materials it needs to avoid US sanctions. More frighteningly, Hu also raises the prospect of nuclear confrontation. “If a war breaks out in the Taiwan Straits or in the South China Sea, the US will find it hard to impose nuclear blackmail toward China,” he says.

“No matter Russia supports China or remains neutral at that time, it will be a super nuclear force which is hostile toward the US. China itself is a nuclear power. And the US will have to be wary of Russia leaping from a position of nuclear parity with the US to a position with nuclear advantage.”

For Hu, this is a good thing. It shows the “complementary strengths” of China and Russia can keep the US out of central Asia and stifle its allies.

For ordinary people it should be terrifying. It shows how strategies and calculations of competing states boil down to gambling with the lives of millions.

This is an attitude China and the US share. NATO’s report also talks about developing its “nuclear deterrent”.

Taken together, the two competing powers spell out a pathway towards annihilation.

NATO countries are ramping up their arms spending. Jens Stoltenberg told the press last Thursday, “2021 was the seventh consecutive year of rising defense spending across European Allies and Canada, amounting to a 3.1 percent rise in real terms,”

That meant £205 billion extra since 2014. Some of the biggest increases came from countries in eastern Europe and the Balkans.

In total, NATO countries spent £762 billion on arms and the military in 2021 alone. NATO demands that its members spend at least two percent of their gross domestic product—their total economic output—on the military. Britain went well above that in 2021. It’s responsible for 6 percent of NATO defense spending—more than any other country in Europe.

Russia has started looking to China to help arm its military. For some 30 years, Russia helped China to grow as a military power. Russian weapons makers supplied the Chinese army with missiles, helicopters and advanced fighter jets worth an average of £1 billion a year.

But now the Financial Times newspaper reports that Russia has asked China for missiles, drones and armored vehicles to help its invasion of Ukraine. China has begun manufacturing arms products it previously bought from Russia. More recently, it has bought off-road vehicles and engines for tanks and navy ships from China to replace those it buys from arms companies in Europe.