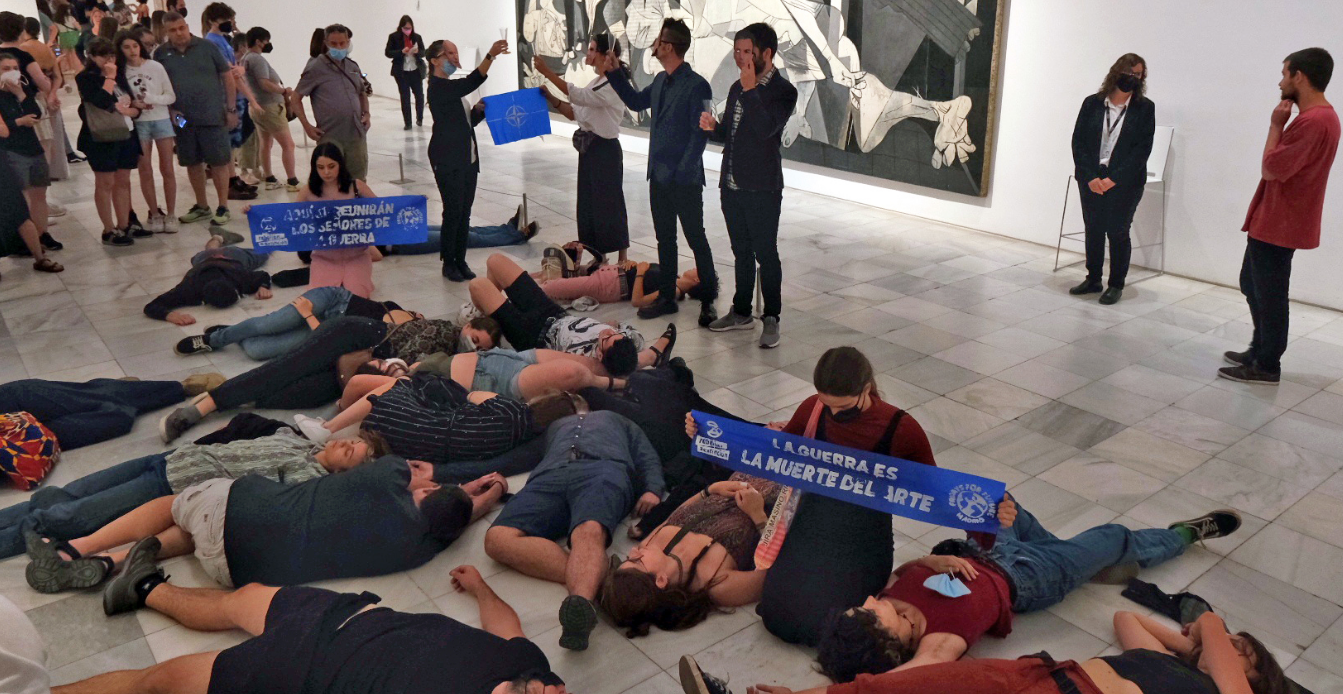 Above photo: Protesters held a die-in in front of Picasso’s Guernica painting at the Reina Sofia Museum in Madrid on Monday. Twitter/XRMadrid.

From a die-in at Picasso’s Guernica to an alternative peace summit, climate and antiwar activists made their “No to NATO” demands clear.

In Madrid, this Monday, a group of around 30 anti-war activists staged a die-in at the Reina Sofia Museum, lying corpse-like in front of Pablo Picasso’s painting of the bombing of Guernica, some grasping signs that read: “War is the death of people. War is the death of Art.”

The protest was organized by Extinction Rebellion and Fridays for Future, marking one of a handful of demonstrations, marches and community dialogues organized around this week’s NATO summit in Madrid. The summit, taking place in the shadow of the war in Ukraine, is expected to result in an increase in military spending across NATO countries, and has paved the way for the expansion of NATO status to Sweden and Finland.

In what he called part of “the biggest overhaul of collective defense and deterrence since the Cold War,” NATO’s Secretary-General Jens Stoltenberg also announced plans to increase the size of NATO’s collective response forces to over 300,000 — an increase of over 650 percent.

In the aftermath of the Russian invasion of Ukraine, even some Spanish politicians who’ve been traditionally critical of NATO, have been relatively muted in their support. Yet, as NATO expands in power and scope, critics are fearful that it could lead to increased militarization and decreased funding for social services in light of rampant inflation and climate-induced crises — as well as increased militarization deployed against refugees at Europe’s borders.

So, demonstrators have gotten creative. On Tuesday, dozens of activists dressed in smocks descended upon Madrid’s Army War School, scrawling anti-NATO messaging on its walls in colorful paints in an effort to transform the facility into a “School of Peace.” Police detained 29 activists for the action.

Last weekend, an alternative Peace summit held by global activists in Madrid called for the dissolution of NATO and towards a system of demilitarized security and investment in social progress.

Elsewhere in the capital, a group of activists from La Guinda Activa emptied red liquid into park fountains — temporarily dyeing them the color of blood — and covering the area with pamphlets noting their “rejection of the NATO summit in Madrid, the militarization of our city, and inter-imperialist wars. Fewer military bases and more community centers.”

Also on the agenda at the NATO summit were calls to incorporate unregulated immigration as a national security threat for member states, thus further militarizing Europe’s borders. The proposal comes less than a week after up to 37 sub-Saharan migrants died while attempting to scale a border fence between Morocco and Melilla, Spain.

“The victims of the tragedy of Melilla agonized for hours under the cruel gaze of those who were supposed to help them and did not do so,” tweeted Helena Garzon, head of the group Walking Borders.

In one direct action, protesters blocked the entrance to Spain’s Ministry of Foreign Affairs with a large banner declaring it “closed for criminal activity.” They also condemned officials’ decision to increase military spending for NATO instead of acknowledging its responsibilities for the tragedy in Melilla and the plight of climate refugees.

On Sunday, earlier demonstrations against the NATO summit culminated in a larger street protest, with upwards of 2,200 people marching on the capital, although organizers place that number much higher. During the march, one protester told El País that he had spent the past 40 years protesting against a military base in his municipality.

“No NATO, no bases, no military spending,” demonstrators shouted.

As the summit came to a close on Thursday, President Biden announced that the United States would be providing another $800 million to Ukraine in the coming days, in addition to increasing its military presence in Europe.

“I am fed up [with] this business of arms and killing people. The solution they propose is more arms and wars, and we always pay for it,” Concha Hoyos, a demonstrator and retired Madrid resident, told Al Jazeera. “So no NATO, no [army] bases, let the Americans go and leave us alone without wars and weapons.”