The extent to which Ukraine was aware of these protocols and the 2003 agreement that put them in place includes entire events organized in Ukraine by NATO-sponsored “think tanks” discussing the necessity to “rip them up” and attempt to assert greater control over the current joint-use of the Sea of Azov.

In the wake of this incident – predictable calls are being made to use it as a pretext to expand NATO even further east, with senior American Foreign Policy Council fellow and former professor at the US Army War College Stephen Blank declaring the need for the US to “lease” Ukrainian ports in the Sea of Azov, patrol the sea with US warships,  all while committing to the “full-fledged” arming of Ukrainian forces.

Blank’s commentary – published in The Hill in a piece titled, “Russia’s attack on Ukraine is an act of war,” predicates an anti-Russian narrative and NATO’s eastward expansion into Ukraine upon a number of blatant falsehoods.

He mentions Russia’s “seizure” of Crimea, its “claiming that Crimea, the Sea of Azov, and the Kerch Strait are exclusively Russian waters,” and the building of the Crimean Bridge which Blank claims is impeding Ukrainian commerce in the Sea of Azov – all as Russian provocations.

However, Blank conveniently omits the US-NATO backed putsch that seized power in Ukraine in 2013 – setting off Ukrainian-Russian tensions in the first place. Nowhere in Blank’s commentary does he mention the prominent role paramilitary Neo-Nazi organizations have played in both overthrowing the elected government in 2013 and militancy carried out against Russian businesses, institutions, and even Ukrainians of Russian decedent – particularly in Donbass, eastern Ukraine. 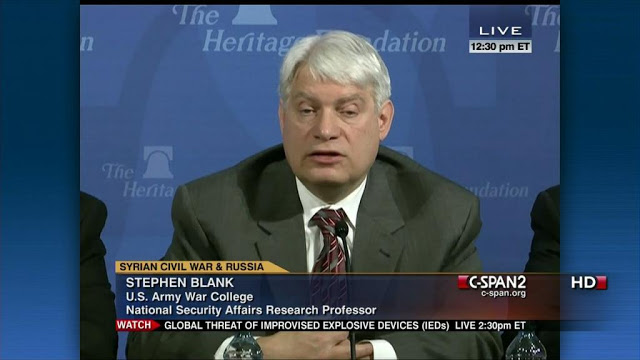 Also conveniently omitted from Blank’s commentary was any mention of decades of NATO’s eastward expansion along with various episodes in NATO’s history where it waged wars well beyond its jurisdiction and mandate, including in Libya and Afghanistan.

Coupled together with Blank’s prescription for a “response” – it is abundantly clear who stood most to benefit from the Kerch Strait incident – especially considering the systematic expansion of NATO that has been ongoing long before President Putin ever came to power.

Beyond imposing more sanctions, waging a robust informational campaign and transferring more arms to Ukraine we can and must do something more innovative and decisive. We have the means and precedent for doing so.

He then suggests (emphasis added):

Ukraine could lease ports on the Black Sea and even in the Sea of Azov to the U.S. while we lend them military equipment they need for air, naval, and ground warfare. The U.S. or NATO naval vessels could then stay at those ports for as long as necessary without bringing Ukraine formally into NATO. It would greatly diminish the chance of Russian attack if those forces patrolled the Black Sea and the Sea of Azov.

Not only do these forces deter future Russian attacks they show everyone, not least in Moscow, that Putin’s reckless adventurism has merely brought NATO into Ukraine to stay, the exact opposite of his goals.

Yet, claiming Russia’s actions prompted NATO’s entrance into Ukraine is preposterous – especially considering NATO’s decades-long and relentless expansion eastward. The US-NATO backed putsch in 2013 was aimed wholly at placing a proxy regime in power that would uproot all Russian influence and interests in Ukraine, fast-track Ukraine’s entry into both the European Union and NATO, and join the front-line of NATO expansion – literally right on Russia’s borders.

NATO Expansion was the Goal Long Before “Putin’s Reckless Adventurism”

Despite assurances from senior US representatives to the Soviet Union toward the end of the Cold War that NATO would not be expanded “one inch to the east,” it has since been expanded directly to Russia’s borders. 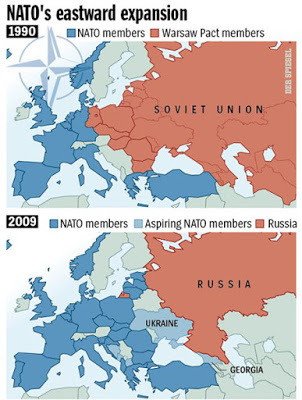 Norway was host of one of the largest NATO exercises in decades – Trident Juncture. Other exercises are regularly held in the Baltic states bordering Russia. And US troops have carried out training, have provided arms to, and have ensured compliant regimes remain in power in Ukraine and Georgia.

Then US Secretary of State James Baker – as revealed in now declassified documents maintained in archives by George Washington University – personally and repeatedly made assurances to then Russian leader Mikhail Gorbachev that NATO would not be further expanded toward Russian borders.

In one document titled, “Memorandum of conversation between Mikhail Gorbachev and James Baker in Moscow,” Baker would state in regards to the reunification of Germany (emphasis added):

We fought a war [World War 2] together to bring peace to Europe. We didn’t do so well handling the peace in the Cold War. And now we are faced with rapid and fundamental change. And we are in a better position to cooperate in preserving peace. I want you to know one thing for certain. The President and I have made clear that we seek no unilateral advantage in this process.

In other words – the US recognized the Soviet Union’s role in defeating Nazi Germany and admitted both nations failed to broker peace in the war’s aftermath. The US also stated it sought to cooperate with Russia regarding the reunification of Germany and the post-Cold War political order in Eastern Europe. It would stand to reason that in exchange for any sort of cooperation from Moscow, certain assurances would have to be made that NATO would not be expanded further eastward.

All our allies and East Europeans we have spoken to have told us that they want us to maintain a presence in Europe. I am not sure whether you favor that or not. But let me say that if our allies want us to go, we will be gone in a minute. Indeed, if they want us to leave, we’ll go and I can assure you that the sentiment of the American people is such that they will want us to leave immediately. The mechanism by which we have a US military presence in Europe is NATO. If you abolish NATO, there will be no more US presence.

Of course, if the sentiment of the American people was and is for the US to withdraw its military presence from Europe – as a defender of global democracy – the US finds itself making a very undemocratic decision by keeping its military in Europe regardless.

We understand the need for assurances to the countries in the East. If we maintain a presence in a Germany that is part of NATO, there would no extension of NATO’s jurisdiction for forces of NATO one inch to the east.

Baker would reiterate this point by asking Gorbachev the question:

Obviously then, just as now, Russia had nothing to gain by allowing NATO to continue expanding eastward. A meeting between then German Chancellor Helmut Kohl and Gorbachev following the Baker-Gorbachev meeting would again reiterate commitments not to expand NATO any further eastward. 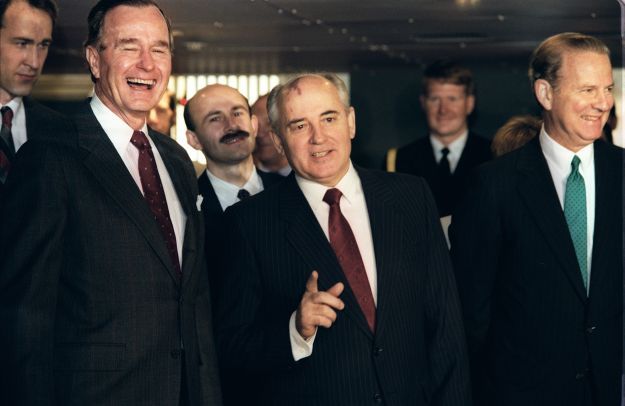 The US has – in retrospect and to no one’s surprise – claimed that the meetings, language used, and agreements were non-binding, misinterpreted, and ultimately did not equate to any sort of constraint on NATO’s expansion, including up to and along Russia’s borders.

Some have claimed that the assurances only applied to NATO’s presence in Germany – but clearly Baker’s assurances of not expanding NATO’s jurisdiction eastward inside of Germany was an acknowledgement that NATO’s move eastward – anywhere – was seen as a threat and provocation by Moscow.

Putting the Shoe on the Other Foot – How Would Washington React to “Russian Expansion?”

To understand how bad NATO expansion actually looks outside the bubble of American exceptionalism and just what sort of situation Moscow is faced with – consider what Washington’s reaction would be to a Russian-backed coup in Canada, Mexico, or both.

Consider both nation’s hosting Russian troops and receiving Russian arms with high-level Russian politicians vowing to overthrow the political order of the United States next.

It takes little imagination to conclude Washington would not tolerate such activity – and considering what the US has already done in reaction to unfounded claims of “Russian meddling” in US elections, such extreme meddling, sanctions, and military and economic encirclement carried out along America’s borders would fall well within the realm as “acts of war.”

Washington has lied the American people into serial wars abroad, destroying entire regions of the planet and killing millions. One can only imagine what Washington would do if actually confronted with genuine acts of war carried out directly on its borders.

And yet Russia’s reaction to exactly these sort of very real provocations carried out by the US and NATO all along its borders and against its allies has been measured, patient – and for some – considered even woefully inadequate.

Despite this, US policymakers and the Western media still manage to twist the narrative a full 180 degrees and portray Russia – a nation with a military budget and GDP a fraction of those of the United States – as the “aggressor.”

NATO Will Not Stop Itself

It is clear that NATO’s expansion is aimed at Moscow itself. It will continue until it is forcibly stopped. This means either by Russia warding off NATO expansion until NATO collapses under its own unsustainable weight, or Russia outmatches NATO at the very edge of the West’s extent in areas Moscow clearly holds the military, sociopolitical, and economic advantage.

The Kerch Strait incident and attempts to leverage it as a pretext to place NATO warships in the Sea of Azov is a dangerous provocation – the Sea of Azov is not “international waters” and is considered by both Ukraine and Russia as an inland sea they share control over.

If people like Stephen Blank have their way and warships enter the Sea of Azov – NATO will be one step past many of the proxy wars the West is already fighting Russia through – and one step closer to fighting Russian forces directly.

Blank’s claiming NATO must act to confront Russian “provocations” is an instance of inverse reality. In this case – NATO is encircling Russia, violently stripping it of buffer states where the West and East have and could have continued to share influence to avoid conflict, and is instead turning them into frontier fortresses in preparation for what is clearly further and more direct conflict planned with Russia in the future.

A nation leading an alliance that must cross the Atlantic Ocean and several seas to station its vessels in Russian waters is not reacting to provocations – it is the provocateur.