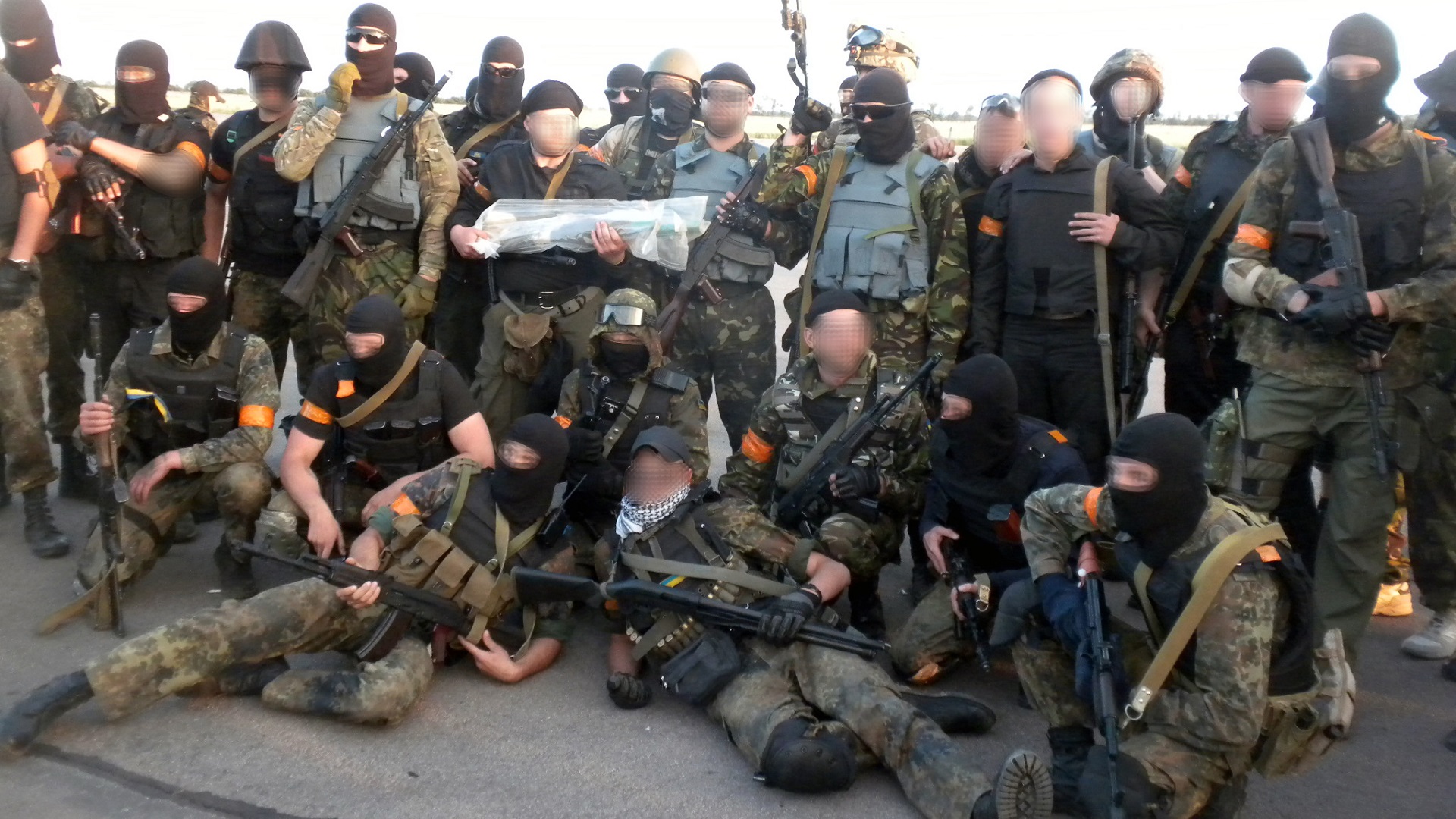 Above Photo: Fighters in Ukraine’s neo-Nazi Azov Battalion in 2014, in a photo published by the Atlantic Council. Creative Commons / Flickr.

The NATO military alliance’s de facto think tank, the Atlantic Council, promoted a notorious neo-Nazi militia in Ukraine, the Azov Battalion, in a 2014 article that depicted the fascist extremists as anti-Russian heroes.

The Atlantic Council is one of the most powerful think tanks in Washington. With funding from the US State Department, numerous Western governments, NATO, and the weapons industry, it plays a key role in shaping US foreign policy, particularly toward Russia.

The Atlantic Council published a report in June 2014 titled “The Battle For Mariupol.” It was little more than a press release for Azov, written by a reporter who embedded inside the neo-Nazi militia.

The article was posted in the think tank’s “New Atlanticist” blog. It identified the author, Askold Krushelnycky, simply as a “British journalist embedded with the Azov Battalion.”

The Atlantic Council article mentioned nothing at all about Azov’s fascist politics.

Reporting on a battle between Ukrainian Russian-speaking independence supporters and far-right Azov extremists over the southeastern city of Mariupol, the article called it “a good piece of news for Ukraine’s government” that the Nazi militias won in combat.

The Atlantic Council euphemistically described these as “local or provincial-level Ukrainian battalions that have been raised, often by pro-Kyiv business magnates, to fill a gap created by the uneven performance of Ukraine’s national military.”

After a 2014 US-sponsored coup d’etat in Ukraine, in which far-right extremist groups played a leading role, Azov was officially incorporated into the country’s National Guard.

The author of the report, Krushelnycky, published a photo of a makeshift armored vehicle used by the Nazi militia, which he said “looked like one of the vehicles from the Mad Max films.”

The Atlantic Council shared this photo on its official Flickr account, with a Creative Commons license that allows for free republication. 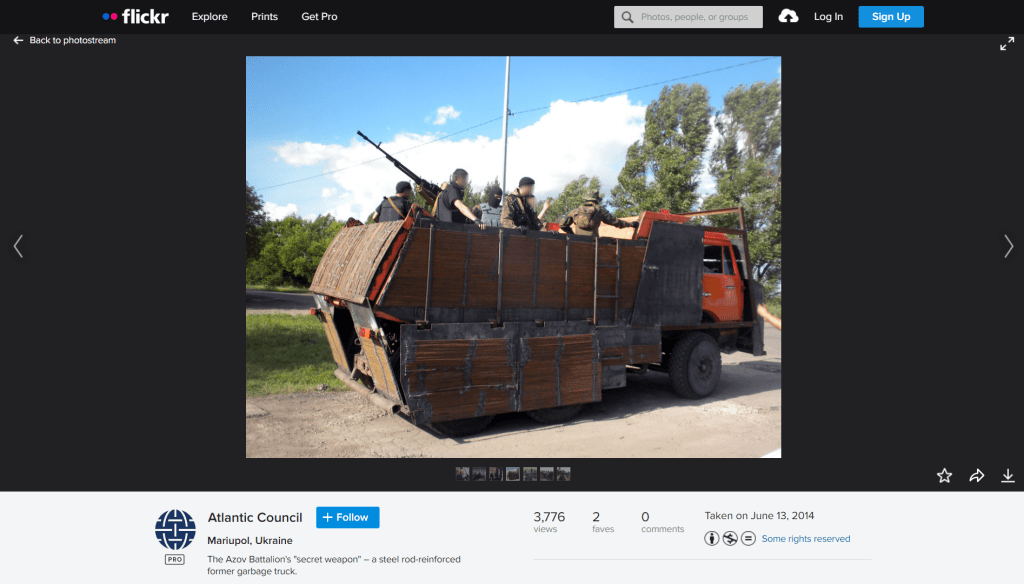 On Flickr, the Atlantic Council created a special album specifically for the photos of the Ukrainian Nazis. (The album is archived here, and the specific photos are archived here, in case the think tank deletes them.) All of the photos were released under the Creative Commons license. 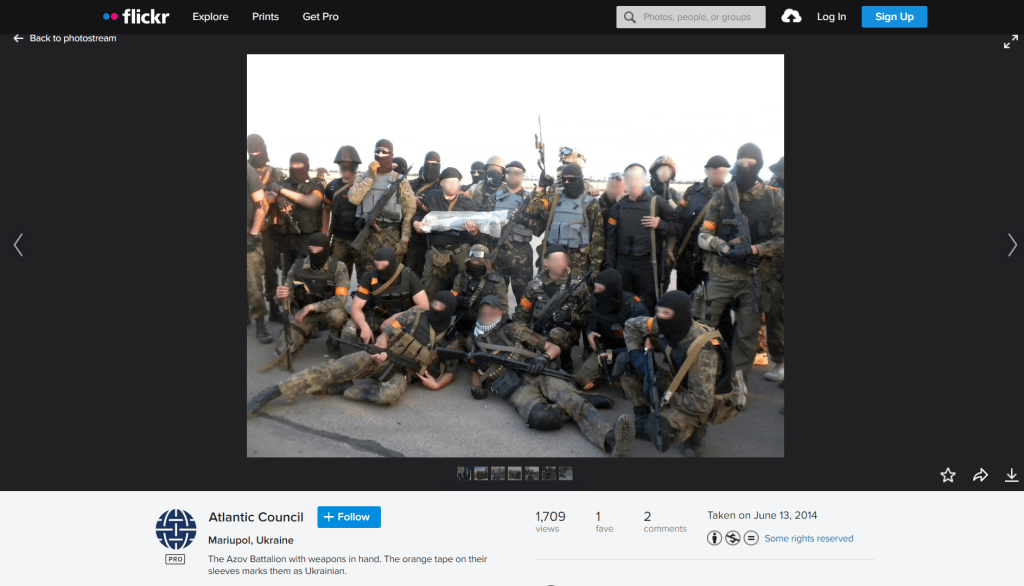 The Atlantic Council even published two photos (archived here) of prisoners taken by the Ukrainian Nazis, describing them as “captured separatist militants.”

The NATO think tank added that one of the Azov prisoners “wears an orange-and-black band on his left wrist, which identifies him as pro-Russian.”

Anti-Russia critics have often claimed that the accusation that Ukraine’s Western-backed government is infiltrated by neo-Nazis and far-right extremists is “Russian propaganda.”

Yet in 2018, the Atlantic Council itself admitted this undeniable fact, in an article titled “Ukraine’s Got a Real Problem with Far-Right Violence (And No, RT Didn’t Write This Headline).”

The post reported that Ukraine’s Ministry of Youth and Sports gave funding to the neo-Nazi group C14 to promote “national patriotic education projects.” C14 has launched brutal attacks on the Roma and LGBTQ communities.

It also cited mainstream human rights organization Amnesty International, which warned that “Ukraine is sinking into a chaos of uncontrolled violence posed by radical groups and their total impunity.” 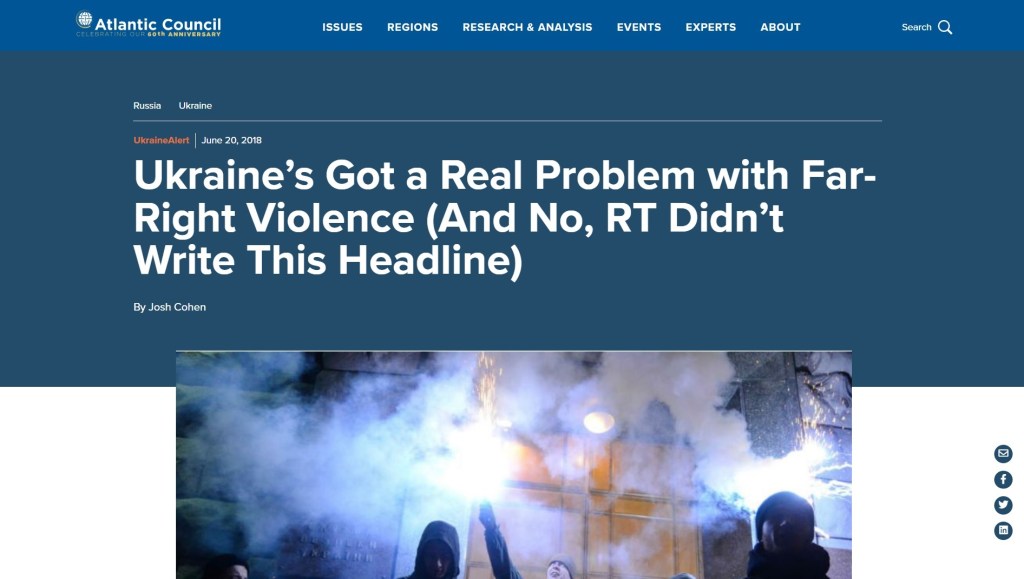 When some US lawmakers launched a campaign to try to get Azov listed as a terrorist organization, due to its close links to violent white-supremacist fascist groups inside the United States, the Atlantic Council pushed back.

In 2020, the NATO think tank published an article titled “Why Azov should not be designated a foreign terrorist organization,” written by anti-Russia researcher Anton Shekhovtsov.

The post admitted that it is “indisputable” that Azov’s ideology is rooted in Nazism, and the “leading core of” it “was formed by the far right.” But Shekhovtsov argued that Azov must not be designated a terrorist organization because it is a special operations detachment of the Ukrainian National Guard, and therefore “an integral part of official structures” of the state, following “orders given by the Interior Ministry.”

Labeling this Ukrainian government-sponsored Nazi group a terrorist organization would be a “gift to the Kremlin,” Shekhovtsov insisted. 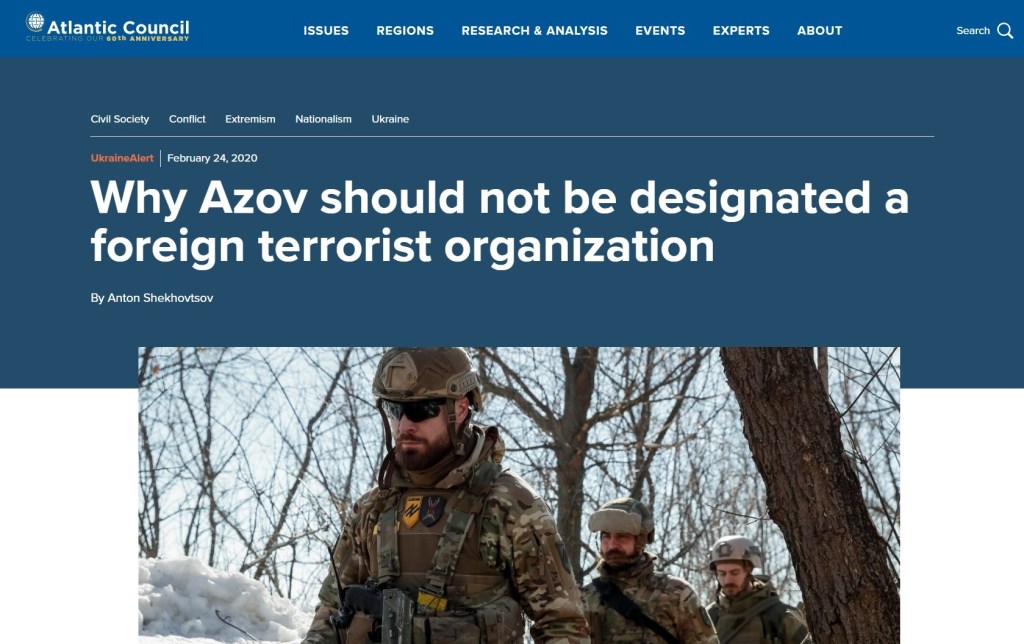 Back in 2014, the Atlantic Council was heroizing these very same Nazis.

The author of the “The Battle For Mariupol” report, Askold Krushelnycky, acknowledged that the pro-Kiev/Western side consisted of roughly 400 fighters, half of whom were Azov Nazis, with the rest comprised of soldiers from Ukraine’s army, national guard, and volunteer units, led by a Ukrainian army general.

Krushelnycky noted that some of these Azov extremists had also fought alongside Georgians and Chechens in their previous wars against Russia.

The Atlantic Council article implicitly admitted that these Nazis played a key role as the muscle behind the violent US-sponsored coup in Ukraine in 2014. Krushelnycky wrote:

Many of the [Azov] battalion’s members took part in the months of mass demonstrations against their former pro-Russian president, Viktor Yanukovych, after he reneged on his promise to bring his country closer to the European Union and instead sided with Russian President Vladimir Putin.Some of those now in the battalion were the persons who transformed the passionate protests into revolution and were in the forefront of street battles against Yanukovych’s brutal security forces.

The “Battle For Mariupol” report makes absolutely no mention of Azov’s fascist ideology.

The closest it comes to disclosing Azov’s extremist politics is one sentence: “The battalion has had political support from hardline Ukrainian nationalists such as Oleh Lyashko, a parliament member from the Radical Party who won 8 percent of votes in last month’s presidential election.”

Krushelnycky described Oleh Lyashko merely as a “nationalist politician.” In reality, he is a notorious right-wing extremist.

Even more deceptively, the Atlantic Council report mentioned the leader of Azov, Andriy Biletsky, but did not say anything about his fascist ideology.

Biletsky helped found two different neo-Nazi groups, the Social-National Assembly and Patriot of Ukraine, both of which use the German Wolfsangel symbol.

Poroshenko, a billionaire oligarch known as the “chocolate king,” is infamous for his ties to far-right extremists as well. One of his advisors wrote a neo-Nazi symbol on Facebook that combines a white supremacist slogan with “Heil Hitler.”

Poroshenko also posed for a photo op with a soldier wearing a Nazi symbol, and even shared a historical photo of German Nazis marching Jews to a death camp and falsely blamed it on the Soviet Union.

In September 2014, Poroshenko was personally given an award by the Atlantic Council’s president and CEO, Fred Kempe; the NATO think tank’s chairman, Jon Huntsman; and the US chairman of the Senate Foreign Relations Committee, Robert Menendez.

They were rewarding Poroshenko for his aggressive pro-Western and anti-Russian policies.