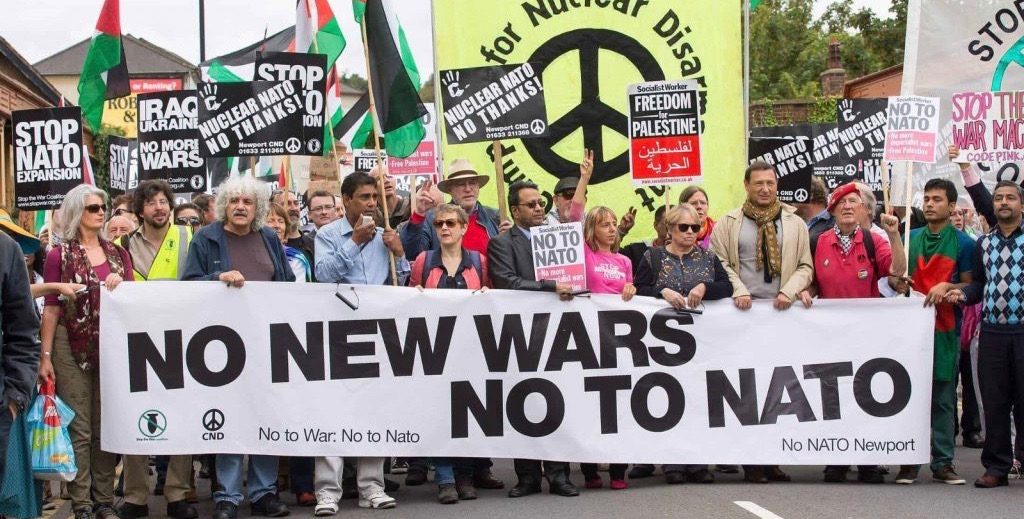 Last month, a Turkish warship came one step away from firing missiles at a French naval vessel off the coast of Libya. In response, Paris suspended its involvement in Operation Sea Guardian — a multinational maritime effort to provide security in the Mediterranean Sea and halt the arms trafficking fueling Libya’s ongoing civil war. Initially, only eight member states — notably excluding both the U.S. and U.K. — supported France’s official complaint. This was only the latest incident in the increasingly frequent — and exceedingly awkward — tensions between several of Washington’s core North Atlantic Treaty Organization (NATO) allies. Indeed, from South America to East Asia, NATO members stand divided over many critical foreign policy issues of the moment.On the subject of NATO — as with much else — President Trump is obtuse and ill-informed.  Only here he isn’t exactly wrong. In fact, recent events raise serious questions about the 70-year old alliance’s lingering relevance and utility — as in what, so to speak, NATO is for?

Sure, The Donald is hardly a bridge-builder, but the media’s temptation to blame him alone for NATO’s growing fissures ultimately misses the mark — and the backstory. While his foreign policy fiascos have widened its divisions, the alliance’s inherent contractions and hypocrisies preceded Mr. Trump. Indeed, some of the current fracture traces back to NATO’s complicated genesis; the rest, mainly, to the problematic pivot after the collapse of its justification-boogeyman — the Soviet Union — and its leading American member’s hyper-imperial post-9/11 turn.

NATO’s contemporary tensions have rather old roots, beginning with the original sins of its founding. Perennially and self-consciously justified as a defensive alliance, the oft-forgotten reality is that NATO was actually formed (in 1949) six years before the ostensibly expansionist Soviet-led Warsaw Pact. And, while the Red Army undoubtedly occupied and helped stifle real representative democracy in Eastern Europe, Washington’s misdiagnosis of Russian postwar capabilities, intentions, and supposed Soviet-led communist monolith counted as the alliance’s first foundational sin. The other was to expediently, but near-fatally, jettison preconditions for Western European members to meaningfully decolonize their anachronistic empires. The first error counterproductively heightened hostility and engendered an apocalyptic arms race; the latter ceded much moral high ground to the Eastern Bloc.

These sins-at-the-founding manifested in early alliance tensions. In the mid-1960s, wary of unnecessary nuclear war, frustrated by U.S. hegemony, and seeking a “Third Way” in the binary Cold War, an ever-sovereignty-conscious France withdrew from NATO’s integrated command structure and booted out American troops (though officially remaining in the alliance).  Throughout the era, Paris even tenuously and haltingly courted Moscow, and vice versa.  Furthermore, Washington sometimes waged diplomatic battles over its European allies imperial intransigence. The 1956 Suez Crisis — the joint French-British-Israeli invasion of Egypt — and Paris’s obstinate brutality during Algeria’s War of Independence (1954-62), were just two notable examples.

Due to the enduring utility of an exaggerated Soviet threat, NATO weathered these inherent contractions. Yet today, despite — or perhaps because of — the best efforts of Washingtonian hawks’ best efforts to revive the peril of Ronald Reagan’s “evil empire” in the form of Putin’s circumscribed Russia, it’s now America’s off-the-rails imperial delusions that risk spiking the alliance. The pivotal shift came after 1991, the very moment NATO’s Soviet raison d’etre officially transformed into its Russian Federation shell. Two climactic decisions conceived in Washington — one of inertia, the other betrayal — then set the stage for today’s farcical Cold War reprise and its related alliance-splintering.

It is all too easy to forget that a crumbled Berlin Wall (1989) and collapsed Soviet Union (1991) very well could — and possibly should — have spelled the end of an inherently anti-Russian NATO. However, misreading internal Soviet collapse as a personal victory, Washington fell prey to triumphalist delusions and opportunistically maintained NATO to abet its unipolar destiny.  Then, even after Mikhail Gorbachev stunningly agreed to the reunification (within NATO!) of Germany — a two-time 20th century-invader of his Mother Russia — a succession of U.S. presidents reneged on the Soviet premier’s one requested (if informal) quid pro quo.  “Any extension of the zone of NATO is unacceptable,” Gorbachev had then warned, to which Secretary of State James Baker assured him “there would be no extension of NATO’s jurisdiction for forces of NATO one inch to the east” — though he and many analysts later quibbled about the promise’s exact meaning and scope.

Instead, it wasn’t three years before President Bill Clinton kicked-off NATO’s eastward expansion that’s now reached into the formal boundaries of the old Soviet Union and to the very borders of the current Russian Federation. The rest, as they say, is history — though it’s a history which undergirds many or most NATO-tensions of the sort that surfaced in the Franco-Turkish naval standoff. For in addition to setting conditions for one past (Georgia, 2008), one present (Ukraine, 2014-), and another potential future war (Baltic States, ?), Washington’s provocations and adventurism have deeply divided the alliance’s member states. Faced with the rise of both China and America’s global unpopularity, and an increasingly multipolar world, NATO countries steadily hedge and diverge on today’s key challenges.

NATO 2020: A survey in global divergence

Which brings us back to the conflict between NATO’s second-largest (Turkey) and third-largest (France) militaries, over the fate of war-torn Libya. France and Turkey accuse each other of violating the arms embargo — which both probably do — as each not-so-secretly back equally-problematic opposing sides in a civil war catalyzed by NATO’s ill-advised 2011 regime change fiasco. Furthermore, in an imbroglio so complex one struggles to keep up, the Libyan debacle reflects — both literally and tangentially — many other cracks in the alliance.

In a direct sense, Paris tacitly supports Moscow’s position since both — along with America’s non-NATO Saudi, Egyptian, and Emirati partners — back the forces of former CIA-asset turned warlord General Khalifa Haftar.  Conversely, Turkey (and to some extent Rome) and also non-NATO Qatar — all home to sizable U.S. military bases — actively assist Libya’s vaguely Islamist, but internationally recognized Government of National Accord (GNA). Bolstering the GNA’s defenses are some 3500 Turkish-paid Syrian mercenary veterans of their native country’s own proxy civil war, many recruited from the ample refugee camps within Turkey. Meanwhile, the Trump administration seemingly has no coherent Libya strategy.

Nevertheless, this Syria connection illustrates the bewildering fluidity of NATO fracture. In Libya, Washington watches from afar as France sides with Russia against Turkey and its Syrian proxies. In Syria’s own bloody civil war, the Obama administration’s long — if halting — fanciful search and support for anti-regime “moderate rebels” initially cohered with the Turkish line. However, in recent years, as it became clear that Bashar al-Assad — with considerable Russian and Iranian assistance — would win the war, Washington’s and Ankara’s positions increasingly and dangerously diverged.

While the Turks never overtly changed sides, they agreed to Tripartite Summit peace talks with the Russians and Iranians that conspicuously excluded Washington. Then, Ankara risked U.S.-sanctions to close a multibillion dollar arms deal with Moscow which included the purchase of sophisticated Russian S400 missile systems. Matters were even messier on the ground. Turkey hoped to carve a physical sphere of influence in Syria before an impending Assad-favorable war denouement. Fearful of both regime resurgence in the area and U.S.-backed Kurdish autonomy — given Ankara’s own conflict with its Kurdish minority — in October 2019 the Turkish military invaded Northeast Syria. Ankara launched threats (but thankfully not missiles) Washington’s way and its troops nearly traded blows with fleeing U.S. forces.

Then, early this year, Russia apparently did draw Turkish blood as the two countries came to the brink of war in Syria. A tenuous March ceasefire seemed to — at least temporarily — avert a regional catastrophe. However, in yet another twist, both Russian and Turkish troops were injured in a July 14 rebel roadside bomb attack on their joint patrol of the agreement’s stipulated deescalation zone. Meanwhile, the U.S. remains openly hostile to Moscow’s (invited) presence.  Washington recently tightened callous sanctions that punish civilians unlucky enough to live in Assad’s sphere and complains of Russian encroachments near remaining U.S. troop positions. In Syria, Washington and Ankara hardly present a consistent or united NATO front.

Still, the alliance’s fault lines extend beyond the Arab World. In most cases, these divisions trace back to member states’ unease with U.S. imperial overreach and pugnacious provocations. Early rumblings surfaced during the Afghan War, when many NATO allies proved unenthusiastic about — and attached combat-avoidance “national caveats” to — increased roles in the alliance’s first “out-of-area” expeditionary operation. Member states were quick, and correct, to point out that NATO was never designed for such missions.

More recently, in ruptures that can be blamed on Mr. Trump, some NATO allies have proven lukewarm on Washington’s belligerence towards China, Iran, and Venezuela. For example, while the alliance has seemingly closed ranks against Beijing in the wake of COVID-fallout, it’s less clear that the previously wavering Europeans — on the Chinese telecom giant Huawei’s 5G network and China’s overall “Belt and Road Initiative” — will sign on to Trump’s desired Cold War 2.0 in the longer term.

Furthermore, even the most traditionally supportive NATO allies publicly opposed The Donald’s frankly absurd 2018 decision to withdraw from the eminently workable Obama-era Iranian nuclear deal. Then, despite officially standing with the U.S., NATO leaders called for restraint and carefully distanced themselves from Trump’s actual decision to assassinate Iran’s top general Qasem Soleimani. Lastly, while most NATO members have joined Washington in recognizing Juan Guiado’s unelected Venezuelan shadow government, most are less enthusiastic about recent U.S. escalatory adventurism such as placing bounties on President Nicolas Maduro’s head and the confusing American mercenary coup attempt. In fact, NATO’s perennial frenemy, Turkey, has proved willing to violate U.S. sanctions to continue trading with the Maduro regime.

None of this should come as a surprise.  Given the alliance’s problematic origins, inherent contradictions, plus its post-Soviet and post-9/11 American imperial stressors, its remarkable that NATO has endured this long.  It’s a safe bet that Donald Trump knows little of this history, and is even more blind to his own role in fracturing an already embattled alliance. If anything, he sees recent internal tensions as only confirming his frequent assertions that NATO is “obsolete.”  Yet the disturbing truth is that Trump is right, if even for all the wrong — and partly self-fulfilling — reasons.
Danny Sjursen is retired a U.S. Army officer and a contributor to the Future of Freedom Foundation. He is a contributing editor at antiwar.com. His work has appeared in the New York Times, LA Times, The Nation, Huff Post, The Hill, Salon, The American Conservative, Mother Jones, Popular Resistance, and Tom Dispatch, among other publications. He served combat tours with reconnaissance units in Iraq and Afghanistan and later taught history at his alma mater, West Point. He is the author of a memoir and critical analysis of the Iraq War, Ghostriders of Baghdad: Soldiers, Civilians, and the Myth of the Surge. His forthcoming book, Patriotic Dissent: America in the Age of Endless War is now available for pre-order. Sjursen was recently selected as a 2019-20 Lannan Foundation Cultural Freedom Fellow. Follow him on Twitter @SkepticalVet. Visit his professional website for contact info, to schedule speeches or media appearances, and access to his past work.