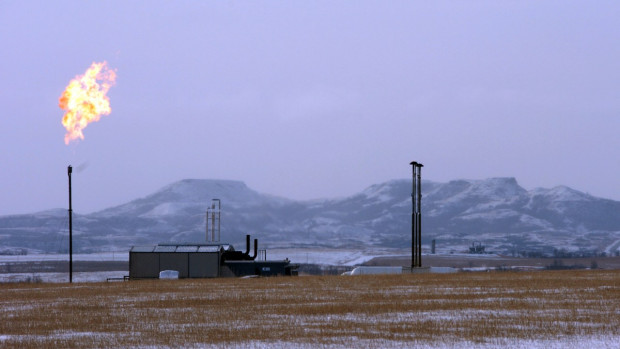 Natural Gas Has No Climate Benefit And May Make Things Worse

Above Photo: A GAS FLARE AT A GAS-PROCESSING FACILITY IN NORTH DAKOTA. CREDIT: AP/MATTHEW BROWN

The evidence is overwhelming that natural gas has no net climate benefit in any timescale that matters to humanity.

In fact, a shocking new study concludes that just the methane emissions escaping from New Mexico’s gas and oil industry are “equivalent to the climate impact of approximately 12 coal-fired power plants.” If the goal is to avoid catastrophic levels of warming, a recent report by U.K. climate researchers finds “categorically no role” to play for new natural gas production.

Sadly, the International Energy Agency (IEA) has just published a “Commentary” on “the environmental case for natural gas,” that ignores or downplays key reasons that greater use of natural gas is bad for the climate.

In the real world, natural gas is not a “bridge” fuel to a carbon-free economy for two key reasons. First, natural gas is mostly methane (CH4), a super-potent greenhouse gas, which traps 86 times as much heat as CO2 over a 20-year period.

That’s why many, many studies find that even a very small leakage rate of methane from the natural gas supply chain (production to delivery to combustion) can have a large climate impact — enough to gut the entire benefit of switching from coal-fired power to gas for a long, long time.

Indeed, researchers confirmed in 2014 that — even if methane leakage were zero percent — “increased natural gas use for electricity will not substantially reduce US GHG [greenhouse gas] emissions, and by delaying deployment of renewable energy technologies, may actually exacerbate the climate change problem in the long term.” Exactly. In fact, a 2016 study found that natural gas and renewables are competing directly with each other to replace coal plants in this country.

So it’s no surprise that the new analysis by researchers at the Tyndall Centre for Climate Change Research finds that “there is categorically no role for bringing additional fossil fuel reserves, including gas, into production.” The scientists explain that we have simply dawdled too long, and if we are to have any plausible chance of staying below 2°C, carbon dioxide emissions need to be driven to near zero levels by mid-century, particularly for the industrialized countries who have historically generated the most cumulative carbon pollution.

The IEA analysis, however, essentially ignores the possibility that any significant amount of new natural production will go toward replacing carbon-free sources, even though it’s already clear in this country that natural gas competes most directly with renewables. It’s also clear that some of the power from the money-losing nuclear power plants that have been shut down recently was replaced by natural gas.

Equally surprising, the IEA analysis uses an untenable leakage rate for methane of 1.7 percent. In a webinar detailing its findings, the IEA explains that it used the official EPA estimates of methane leakage as a starting point — supposedly because the U.S. has the best data — and then factored in industry estimates. But the EPA estimate (which was 1.2 percent and is now 1.5 percent) has been widely criticized.

Back in 2014, a comprehensive Stanford study published in Science concluded “A review of more than 200 earlier studies confirms that U.S. emissions of methane are considerably higher than official estimates. Leaks from the nation’s natural gas system are an important part of the problem.”

The Stanford analysis found a leakage rate of 5.4 percent (plus or minus 1.8 percent) — enough to give natural gas no net climate benefit for decades, even if it only replaced coal (which it doesn’t).

These conclusions have been confirmed by data and observations from a later 2014 study as well as 2016 satellite data and surface observations analyzed by Harvard researchers. Certainly there is not complete agreement between every study, but there is little doubt that U.S. methane leakage rates are considerably higher than the official numbers from the EPA, which themselves are mostly based on industry-provided estimates, not actual measurements.

So it’s indefensible to use EPA numbers and industrial estimates to estimate methane leakage, as the IEA does.

Financial Times declares a winner in the war for energy’s future, and Big Oil won’t be happy

‘Fossil fuels have lost. The rest of the world just doesn’t know it yet.’

The good news is that renewables are ready to handle the job of running a modern economy, so we don’t need to rely on natural gas as a “bridge” to a carbon-free future. That’s where the lion’s share of our focus needs to be now.