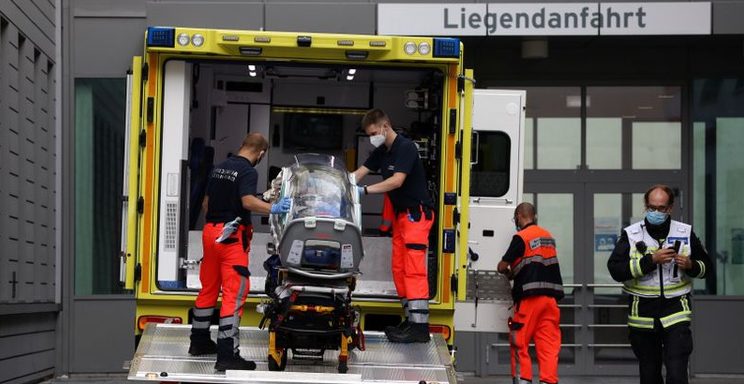 Navalny Was Not Poisoned

Above photo: Paramedics load a stretcher into an ambulance that allegedly transported Russian opposition leader Alexei Navalny at Charite Mit.

Note: The story that Russian dissident Alexey Navalny was poisoned by President Putin did not make much sense to me. The source was a statement from his spokesperson. Of course, the western media and anti-Putin politicians immediately accepted it as true. No evidence of poison was ever described, and the story below reports no poison was found in his medical examination. There was just a report he had drunk some tea and became ill.

Poisoning made no sense to me because it would surely had been discovered if he became ill or died and the negative publicity about a dissident being poisoned would do more damage to Putin than Navalny was capable of.

Moon of Alabama reports below that Navalny was a diabetic and was suffering from hypoglycemia, or diabetic shock, while flying on a plane. There have also been reports that Russia initially refused to allow him to be moved to Germany for treatment but that may have been a medical decision due to his conditon.

We wait for more information about this situation. German doctors are saying he was poisoned but have not identified a poison.  – KZ

On Thursday morning the Russian rightwing and racist rabble-rouser Alexey Navalny fell ill during a flight from Tomsk in Siberia to Moscow. He eventually went into a coma. The plane had to be rerouted for an emergency stop in Omsk. Navalny was brought into a clinic and put on a ventilator.

Meanwhile his spokeswomen Kira Yarmysh claimed, without evidence, that Navalny had been poisoned:

Yarmysh believes Navalny, who showed no symptoms prior to the flight, was “poisoned with something mixed into his tea” as it was “the only thing he drank this morning.” In the middle of the journey, she wrote later, he began sweating, went to the toilet, and apparently lost consciousness for a period. RIA Novosti reported that Navalny did not eat or drink anything on the flight.

The doctors in the intensive care unit in Omsk had difficulties to stabilize Navalny. A number of tests were made but no poisons were found. Yesterday evening the patient had stabilized. On request of his family, he was transported to Germany where he is currently undergoing treatment.

The hospital in Omsk said that Navalny had experienced severe hypoglycemia:

The head physician of the Omsk emergency hospital, Alexander Murakhovsky, said that Alexei Navalny’s condition was caused by a sharp drop in blood sugar.

When a person experiences diabetic shock, or severe hypoglycemia, they may lose consciousness, have trouble speaking, and experience double vision. Early treatment is essential because blood sugar levels that stay low for too long can lead to seizures or diabetic coma.Hypoglycemia can sometimes happen rapidly and may even occur when a person follows their diabetes treatment plan.

A diabetic shock happens when someone with diabetes has taken too much insulin or has eaten too little. My father had diabetes and I have seen him experiencing this problem several times. He always carried a piece of sugar with him to use it as soon as he felt the first symptoms. My mother taught me the basic first aid I would have to apply should my father be unable to help himself. Thankfully I never had to use it.

It is important that the measures are taken immediately. A prolonged coma can lead to brain damage. As Navalny was on a plane up in the air it took quite a while to get him into a hospital. His prolonged coma may have created additional damage to his body.

People with diabetes usually learn how to control their blood sugar level. I have found no information that Navalny actually has diabetes but that does not say much as it is not something people usually talk about. I am not aware of any medication or poison that rapidly lowers the blood sugar level and can be applied secretly. It would also be stupid to use such in an attempt to kill someone as the attacked person simply has to eat something to negate the effect.

Intellinews reports that Navalny has diabetes:

Navalny said himself that he suffered from diabetes in 2019, giving some credence to this explanation.

The ‘western’ media jumped onto the ‘Navalny was poisoned’ claim to heap the usual trash on Russia. They also claimed that Navalny is the ‘opposition leader’ in Russia even as he polls at 2% which is lower than the leader of the communist party and several other real opposition politicians. Nor is Navalny a ‘liberal’. He is a rightwing nationalist and racist who sees Cechen and other non-Russian people as cockroaches that should be killed (vid).

In an interview with the Guardian Navalny confirmed those views:

Several years ago, [Navalny] released a number of disturbing videos, including one in which he is dressed as a dentist, complaining that tooth cavities ruin healthy teeth, as clips of migrant workers are shown. In another video, he speaks out in favour of relaxing gun controls, in a monologue that appears to compare migrants to cockroaches.I ask him if he regrets those videos now, and he’s unapologetic. He sees it as a strength that he can speak to both liberals and nationalists. But comparing migrants to cockroaches? “That was artistic license,” he says. So there’s nothing at all from those videos or that period that he regrets? “No,” he says again, firmly.

The ‘western’ media also try to connect the ‘poisoning’ of Navalny to Russia’s President Vladimir Putin. That makes no sense at all. Navalny is no danger to Putin and is actually useful for him as he keeps other ‘liberals’ busy with nonsensical ideas.

During the last years, Navalny has made some enemies by uncovering corruption cases. His latest one was about the local governor of Tomsk. It was also the reason why he had flown there. Should Navaly become the victim of a crime, the suspects should be sought there.