Above Photo: PFAS substances linked to cancer have likely leached into drinking water that supplies metropolitan D.C.SKITTERPHOTO, VIA PEXELS; EDITED: LW / TO

The U.S. Navy has contaminated the groundwater at Maryland’s Patuxent River Naval Air Station (NAS) with 1,137.8 parts per trillion (ppt) of per- and polyfluoroalkyl substances (PFAS), according to a report published last July by the engineering firm CH2M Hill. PFAS have been associated with a variety of cancers and are known to jeopardize human reproductive health. The contamination was not reported on the Defense Department’s March 2018 report on PFAS.

There are no restrictions currently on military or industrial PFAS discharges under either the federal Clean Water Act or the federal Clean Air Act. The Environmental Protection Agency (EPA) has issued a non-binding, non-regulatory advisory to states and municipalities of 70 ppt in drinking water. Neither the military nor chemical companies are currently required to report releases of PFAS through the federal Toxic Release Inventory. Some states, such as nearby New Jersey, have moved to fill the vacuum left by the EPA. However, Maryland does not regulate the carcinogens, and the Navy’s discharge of PFAS into Maryland’s groundwater is 87 times higher than what New Jersey allows.

According to the CH2M Hill report, aqueous film-forming foam (AFFF) containing PFAS has been extensively used in hangars and at multiple locations on the base in fire-training exercises. Much of the contamination is associated with Site 41, an old firefighting burn pad, as well as Site 34, a drum disposal area. Site 34 is located a quarter-mile from Rt. 235 near the southwest corner of the base. The area adjacent to the base is populated with many homes served by groundwater wells.

The evaluation of the sites on base that have been identified as having known or suspected releases of PFAS was limited to “existing environmental restoration sites,” according to the CH2M Hill report. These areas were found “to have no complete exposure pathway to a potential drinking water source, hence no off-base drinking water sampling was initiated.”

The CH2M Hill report prepared for the Navy reviewed 24 wells across the base with well depths ranging from 284 to 900 feet. The study says the releases of AFFF stay within the top 100 feet of groundwater, which is separated from much deeper aquifers with clay and silt, making it impossible for the carcinogens to reach private wells outside the base. St. Mary’s County, where the NAS is located, does not allow wells for drinking water to draw from the shallow “surficial” aquifer.

Case closed? Are we absolutely certain that private well owners just 2,000 feet from the release of these poisons are safe? Wouldn’t relatively inexpensive testing of adjacent, privately owned wells be a prudent course of action?

The CH2M report says the poisonous streams that originate on the base stay within the station boundaries until draining directly or indirectly into the Patuxent River or the Chesapeake Bay.

In 2010, the U.S. Geological Survey collaborated with the University of Maryland and sampled the Patuxent River specifically for perfluorooctane sulfonate (PFOS, a particularly lethal variety of PFAS) and found concentrations of 22 ppt. The Patuxent River supplies drinking water to the Washington, D.C., metropolitan area, although PFAS is not tested by the Washington Suburban Sanitary Commission.

Reports about contamination have economic implications, so everything you hear from an official source is more like a commercial than a health advisory.

Are the crabs and fish in the Patuxent safe to eat? Does this level of contamination pose a threat to aquatic life and the humans who consume seafood?

Based on the recorded history of releases and information gathered at the Patuxent River Naval Air Station, nine high-priority sites were identified that were likely impacted by PFAS from the release of aqueous film-forming foam. The CH2M Hill study says the environmental impact at these sites are estimated to be minimal for multiple reasons: the majority of the releases occurred over 25 years ago; diluted foam was released instead of concentrated foam; and releases were single incidents over short periods of time.

Despite these assertions, the length of time since the release of these carcinogens is irrelevant because PFAS never break down in nature. It is why they are called “the forever chemicals.” The CH2M Hill study explains how PFAS are currently found in the groundwater at the site of the former Air Force Base in England, Louisiana, at concentrations of 10,970,000 ppt. That base closed 27 years ago. The concentration of the contaminants and the frequency of releases are also inconsequential. PFAS in microscopic amounts is dangerous to all living organisms. One Harvard University study argued that even 1 ppt of PFAS in drinking water is potentially harmful.

For years, the CH2M Hill report notes, pipes carried expired jet fuel, diesel fuel or waste oil to an old fuselage set in a 200-foot pit on a concrete pad at the Patuxent River base. Massive fires were routinely ignited and doused by the PFAS-laced foam. The carcinogens were allowed to leach into the ground.

The Navy has known of the serious environmental and health impacts of PFAS since 1974.

The CH2M Hill report stated that Hangar 2133 at Patuxent River is equipped with an AFFF cannon fire-suppression system supplied by 4,000 gallons of PFAS foam. Multiple inadvertent releases have occurred in the hangar. These releases occurred in November 2002, June 2005 and April 2010. During one of these incidents (date unknown), the cannon system for the entire hangar was activated inadvertently. The Navy says the quantities of AFFF concentrate or foam for these releases are unknown. A similar mishap at Eglin Air Force Base in Florida took two minutes to create 17 feet of cancer-causing foam to cover a two-acre hangar. 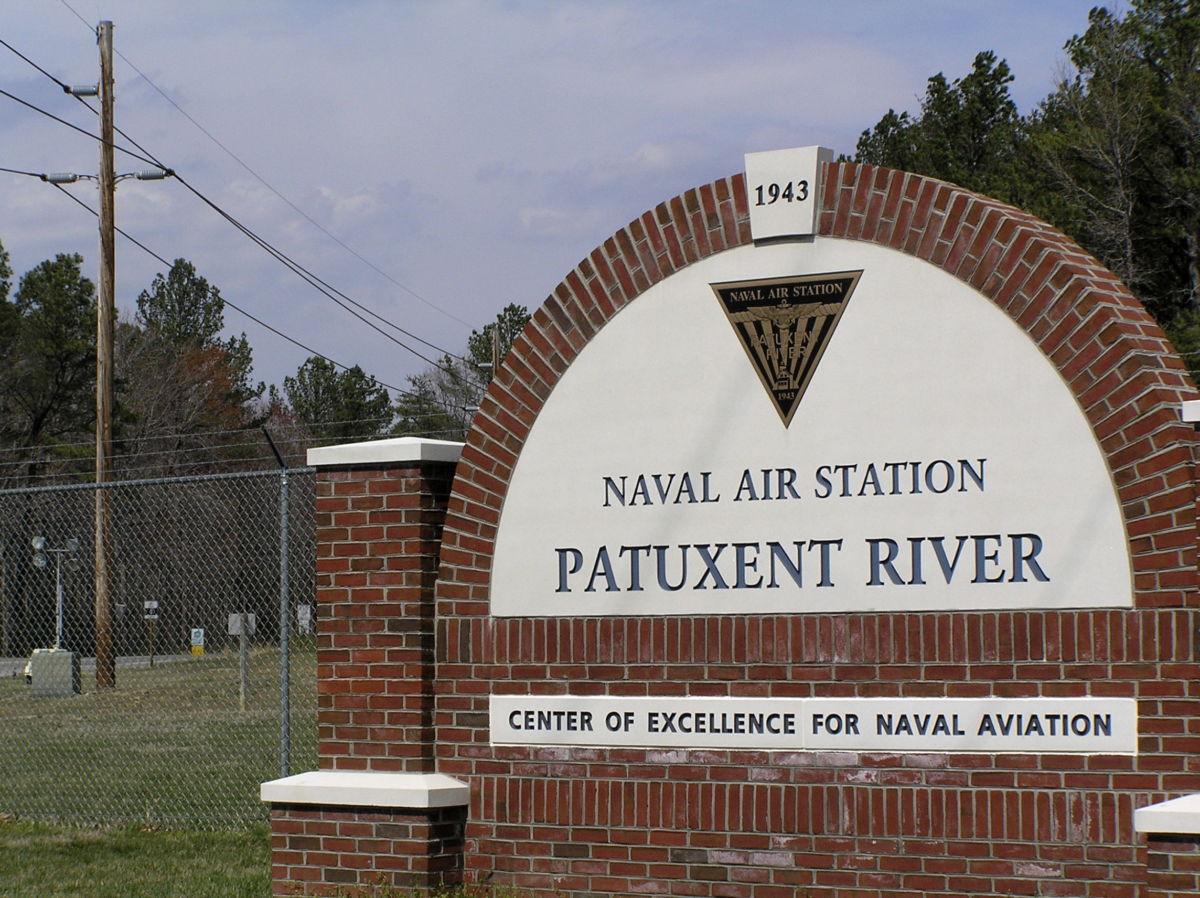 The CH2M Hill report details a 2010 release of AFFF at Patuxent River NAS that resulted in a notable quantity of foam being sent to the sanitary sewer via the bypass valve of the oil/water separator, effectively “foaming” the local wastewater treatment plant run by the St. Mary’s County Metropolitan Commission (MetCom). Nearly 500 gallons of AFFF were released in mid-2000s. The foam reportedly went to an oil/water separator which leads to MetCom sewer drains. Another release in 2011 sent 150 gallons of AFF down the drain to MetCom.

Sewage from the Patuxent River Naval Air Station is pumped to the Marlay-Taylor Water Reclamation Facility. The potentially carcinogenic wastewater sludge is disposed by land application at various locations throughout St. Mary’s County.

There is no question that PFAS, as well as endocrine disruptors, are flowing into our ground, surface and other water sources.

Maryland public health officials defended the investigation by CH2M Hill on behalf of the Department of Defense. “The federal government and their consultants have done (and continue to do) a thorough job in investigating the environmental and public health impacts to the community inside and outside the federal installation,” Director of Environmental Health for St. Mary’s County Health Department Daryl W. Calvano told Truthout in an email.

Calvano was asked if relatively inexpensive testing of privately owned wells close to the releases of carcinogens would be a prudent course of action. He responded, “Our office provides water sampling for new and replacement wells within our jurisdiction. However, our sampling requirements are well defined by Maryland Code of Regulations.”

Translation: They’re not required to test for PFAS.

The Maryland health official declined to answer questions regarding the levels of PFAS in municipal well water at several locations in St. Mary’s County. Calvano was asked if the shallow, contaminated surficial aquifer and streams always stay within the station’s boundaries until draining into the Patuxent River or the Chesapeake Bay, but he did not respond, and he didn’t answer a question regarding the safety of eating seafood caught in local waters. Calvano also declined to answer questions regarding the environmental impact of multiple discharges of the carcinogenic fire-fighting foam by the Navy into the county’s sanitary sewer system.

The CH2M Hill report and the county’s response to concerns about PFAS contamination were shared with Frederick Tutman, CEO of the Patuxent Riverkeepers, an organization that works to safeguard the river’s fragile ecosystem.

Tutman said it is rare to see governmental authorities “get real” about the true state of the water. “It all serves to baffle people about whether the water quality is acceptable or not,” he told Truthout. Tutman, whose family has lived on the banks of the Patuxent for seven generations, explained that reports about water quality and contamination “have economic implications, and so nearly everything you are likely to hear from an official source is more like a commercial than a health advisory.”

The riverkeeper explained, “If you read between the lines, most reports about water quality from establishment sources suggests that everything that should and could be done is being done to protect the public. The truth is that a lot falls between the cracks if not required by federal or local regulations, or if a test is too expensive and not in the budget, or if the information would cause controversy.”

Tutman continued, “There is no question that PFAS, as well as endocrine disruptors, pharmaceutical contaminants and lots of other stuff you would never want on your morning corn flakes are flowing into our ground, surface and other water sources; and rather than acting as watchdog, the regulatory establishment keeps offering fresh misdirection, and pacifies the public into not taking necessary action or not seeking vital public health information that might help protect communities.”

The public affairs officers at Maryland military bases and public health officials throughout the state encourage citizens to participate in occasional Restoration Advisory Board (RAB) meetings. The boards are promoted as a forum for exchange of information and partnership among citizens, the military, the EPA and the state, although Tutman says the RAB process is flawed. “While the problem may have started on a military base, the impacts might have migrated well beyond the military reservation. The further an impact gets away from the actual source on a federal installation, the less diligence seems to be applied to get at the underlying truth and reality of the public risks.”

Tutman said people need to ask better questions and work harder to hold their feet to the fire. “Generally, they tell us just enough to make us go away,” he said. “The prevailing sentiment seems aimed at short-circuiting citizen activism rather than enabling it.”