Having come to Guam from a ‘flag waving visit’ to Vietnam, the virus-stricken USS Theodore Roosevelt nuclear aircraft carrier, with 5,000 crew members on board, docked in Guam on March 27 after the number of positive cases onboard continued to grow.

At the Pentagon on Wednesday, acting Navy Secretary Thomas Modly told reporters 114 of the warship’s sailors had tested positive. So far, over 600 of the sailor’s nearly 5,000 crew members have tested negative, Modly said.  He couldn’t yet say how long the Roosevelt might stay in Guam, or the evacuation’s effect on the fleet’s readiness. But he stressed that the aircraft carrier was being maintained in ‘fighting condition’.

Modly emphasized that the Navy will not remove every sailor from the warship.

“This ship has weapons on it. It has munitions on it. It has expensive aircraft, and it has a nuclear power plant. It requires a certain number of people on that ship to maintain safety and security,” he said.

Sailors who have tested positive for COVID-19 will be restricted in isolation facilities on the Navy base, Adm. John Menoni, commander of Joint Region Marianas, told Guam government officials.

The Navy has convinced Gov. Lou Leon Guerrero to allow sailors who test negative for the virus to be quarantined in certain Guam hotels for 14 days. The sailors will be forbidden from leaving the hotels which will be secured by military personnel.

The first of the COVID-19-free sailors are expected to be transported initially to two hotels – the Sheraton Laguna Guam Resort and Dusit Thani Guam Resort.

“Once those sailors are quarantined, isolated and re-tested, when they are COVID-free, the plan will be to rotate them back onto the ship and finish the remainder on the ship,” a navy spokesperson said. “There’s never been an intent to take all the sailors off of that ship. If that ship needed to respond to a crisis today, we would respond.” 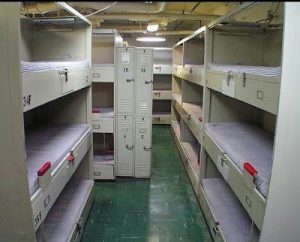 Tight quarters on-board an aircraft carrier are not conducive to ‘social distancing’.  The aircraft carrier captain was ‘relieved of his duty’ days after writing a letter to the Pentagon asking for help due to the growing virus on his ship.  His firing sends a clear message to other commanders throughout the US military – keep quiet about the virus at your installation.  The Pentagon understands that they have a public relations ‘situation’ on their hands and wants full control of the narrative.

The military has said security will be posted on each floor of designated quarantine hotels and in the perimeter of the hotels. Sailors will not be allowed to go to beaches.

The U.S. Navy on Wednesday declined to rule out punishing the captain of the USS Theodore Roosevelt, who wrote a scathing letter to Navy leadership asking for stronger measures to control a coronavirus outbreak onboard.  The letter was leaked to the San Francisco Chronicle which ran the story.

“I don’t know who leaked the letter to the media. That would be something that would violate the principles of good order and discipline, if he were responsible for that. But I don’t know that,” acting U.S. Navy Secretary Thomas Modly said when asked multiple times whether the captain faced discipline.

“The fact that he wrote the letter up to his chain of command to express his concerns would absolutely not result in any type of retaliation,” Modly said.

In the letter, the captain called for “decisive action”: removing over 4,000 sailors from the ship and isolating them. He said that unless the Navy acted immediately, it would be failing to properly safeguard “our most trusted asset – our sailors.”

The Navy dismissed the captain from his post on Thursday, two days after the officer’s unusually blunt letter .

Heartwarming video of sailors cheering Navy Captain Brett Crozier, the commander of the aircraft carrier USS Roosevelt, who was relieved of his command after raising #coronavirus spread on the ship. The sailors chanted “Captain Crozier” as he departed.
pic.twitter.com/XJ1wdSLz02

Navy Capt. Brett Crozier, the commanding officer of the USS Theodore Roosevelt, was relieved of command at the direction of acting Navy secretary Thomas Modly. The Navy removed him after becoming increasingly convinced that he was involved in leaking the letter to the media to force the service to address his concerns.