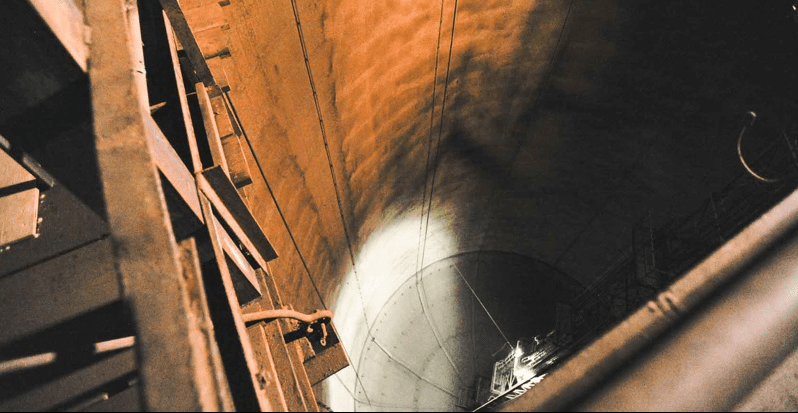 Above photo: An interior view of one of the Red Hill tanks.

US National Security Requires It.

Hawai’i – While the U.S. Navy continues to argue that U.S. national security requires that its 80-year-old leaking 20 story underground jet fuel tanks remain open, I argue the opposite–that for U.S. national security reasons the 200-million-gallon facility be closed down before a catastrophic leak destroys the potable water supply for 400,00 residents of Oahu.

Once the aquifer is contaminated by a predicted major fuel leak, it cannot be flushed out or be rehabilitated.  U.S. Navy officials have said that the water from a contaminated aquifer would have to be filtered either by a massive filtration system that does not yet exist or individual households would have to filter the water at home.

The Navy does not have a filtration system on the island of Oahu and citizens do not have sufficient bottled water or individual household filtration systems should there be a catastrophic leak of toxic jet fuel into our water supply.  The state of Hawai’i  that issues the permit for the underground fuel tank system to remain open is playing with our lives by allowing this ticking time bomb of the leaking tanks to continue.

Leaks occur regularly.  At least 73 fuel leaks have been documented at the Red Hill facility, according to the Board of Water Supply.  The Sierra Club estimates that more than 180,000 gallons of fuel have leaked since construction of the tanks during World War II.

The recent leaks include 27,000 gallons of fuel leaked from Tank 5 in 2014, and never recovered. In March 2020, a pipeline connected to Red Hill leaked an unknown amount of fuel into Pearl Harbor. Roughly 7,700 gallons of fuel was collected. The Navy confirmed it was an active leak in January 2021, but misled the public for months. In May 2021, approximately 1,000 gallons of jet fuel was released. The cause is still under investigation. In July 2021, a leak of 100 gallons that is suspected to be connected to the Red Hill facility was found at Kilo Pier on Pearl Harbor naval base.

At long last, on October 27, 2021, the State of Hawai’i Department of Health fined the US Navy $325,000 for its environmental violations at the Red Hill facility.

No doubt there have been other leaks that have occurred that no one knows about, or that the Navy knows about but is not making public.    I say that as a 29-year U.S. military veteran who retired as a Colonel.

We know that many military personnel and their families have been sickened from chemical leaks that the commanders of the bases knew about, but did nothing to resolve.  In a major case on water supply pollution at military bases, the pollution at the U.S. Marine Base at Camp Lejeune, North Carolina resulted in a Congressional act “Caring for Camp Lejeune Families Act of 2012”

that provided a presumptive service connection of exposure to contaminants in the water supply for Veterans, Reservists, and National Guard members who later developed one of the following eight diseases:

High levels of “Forever Chemicals” have been found on over 175 military bases from the Chesapeake Bay to the West Coast, Great Lakes, Alaska and Florida.

In the 2022 Department of Defense budget of $778 BILLION to which Congress added an extra $20 BILLION over what the military and administration had requested, surely the water supply and health of  400,000 residents of Oahu, including the military personnel who live in the aquifer area and staff the important military commands located on Oahu, are more important than the fuel for the aircraft, ships and other vehicles that are operated under these commands.

If military personnel are sick from the contaminated water supply, then the national security of our country is jeopardized by one of the military commands that has not made the safe storage of jet fuel a priority.

The Pentagon spent $8 trillion of our U.S. tax dollars over the past ten years, which is the equivalent of over $1.5 million per minute.  Within the 2022  $778 BILLION budget surely $5 BILLION can be found to close down the Red Hill jet fuel tanks and construct above ground tanks.

Above ground fuel tanks are not difficult to construct.  There are already many above ground tanks on the island of Oahu.

Ironically, what seems to be most difficult is the will to finally admit that 80-year-old leaking fuel tanks must be closed down for the human security of 400,000 residents of our community.  On October 29, 2021 over 200 persons participated in a virtual Red Hill Task Force meeting.  The overwhelming majority of public comments made at the meeting were to close the Red Hill fuel tanks down.

The time has come for the Red Hill fuel tanks to be closed before catastrophe strikes and the water supply of 400,000 on a national defense strategic location, an island in the middle of the Pacific Ocean, 2400 miles from the continent, is polluted forever.

Ann Wright served 29 years in the U.S. Army/Army Reserves and retired as a Colonel.  As a reservist, she had assignments with the Indo-Pacific Command. She was a U.S. diplomat for 16 years and served in U.S. Embassies in Nicaragua, Grenada, Somalia, Uzbekistan, Kyrgyzstan, Sierra Leone, Micronesia, Afghanistan and Mongolia.  She resigned from the U.S. government in March 2003 in opposition to the U.S. war on Iraq.  She is the co-author of “Dissent: Voices of Conscience.”