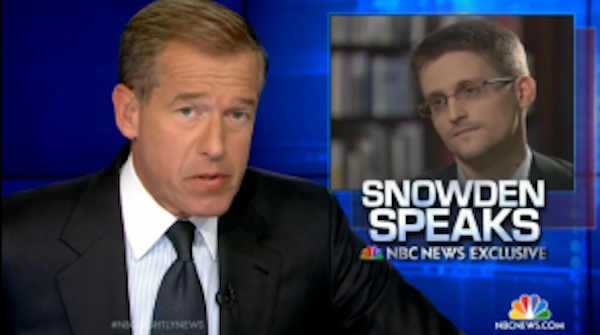 You may have heard that NBC News was able to snag an exclusive interview with NSA whistleblower Edward Snowden. They turned it into a one-hour primetime special on May 28. But before that aired, that night’s NBC Nightly News–likely seen by more people–delivered a lengthy segment making the case against Snowden–almost as if the network needed to establish that it certainly wasn’t taking his side.

“Members of the Obama administration have launched a frontal attack on Edward Snowden,” anchor Brian Williams began. The report gave ample room for that attack, and it was clear from the start that this was the point of the segment. Here’s how Williams described Snowden:

Many regard him as treasonous and a traitor who should pay dearly for what he’s done, and many fear he has done grave damage to the United States. Some of our viewers have let us know they are outraged that we have interviewed him at all.

So he’s a treasonous traitor, or someone who damaged the country. Or perhaps just someone you shouldn’t interview. Take your pick!

NBC played a long clip from Snowden, which ends with him saying that he considers himself a patriot.

Then they cut back to Williams:

That point proved too much today for the US Secretary of State John Kerry, who like so many other Americans finds Snowden simply a traitor to his nation.

That led to a long clip from an MSNBC show in which Kerry said Snowden had “hurt his country” and had helped terrorists, making it “harder to protect our nation.” Snowden is, Kerry said, “a coward, he’s a traitor.”

After that it was back to Williams, who called him “an energized Secretary of State John Kerry,” then turned to his NBC colleague Chuck Todd to get him to elaborate: “Chuck, without exception, this is the position on Edward Snowden you hear where you are.”

Todd confirmed that Kerry was “channeling rage,” but stressed that this was no act: “That wasn’t political theater…. That’s real rage.”

The official anger, he went on, is about “the selective leaks that they hate, that they believe has undermined America’s standing in the world.”

A point Williams underscored at the end: “That’s right, because Edward Snowden made doing business that much more difficult overseas.”

IF NBC was trying to make it abundantly clear that they’re definitely not Glenn Greenwald, they succeeded.